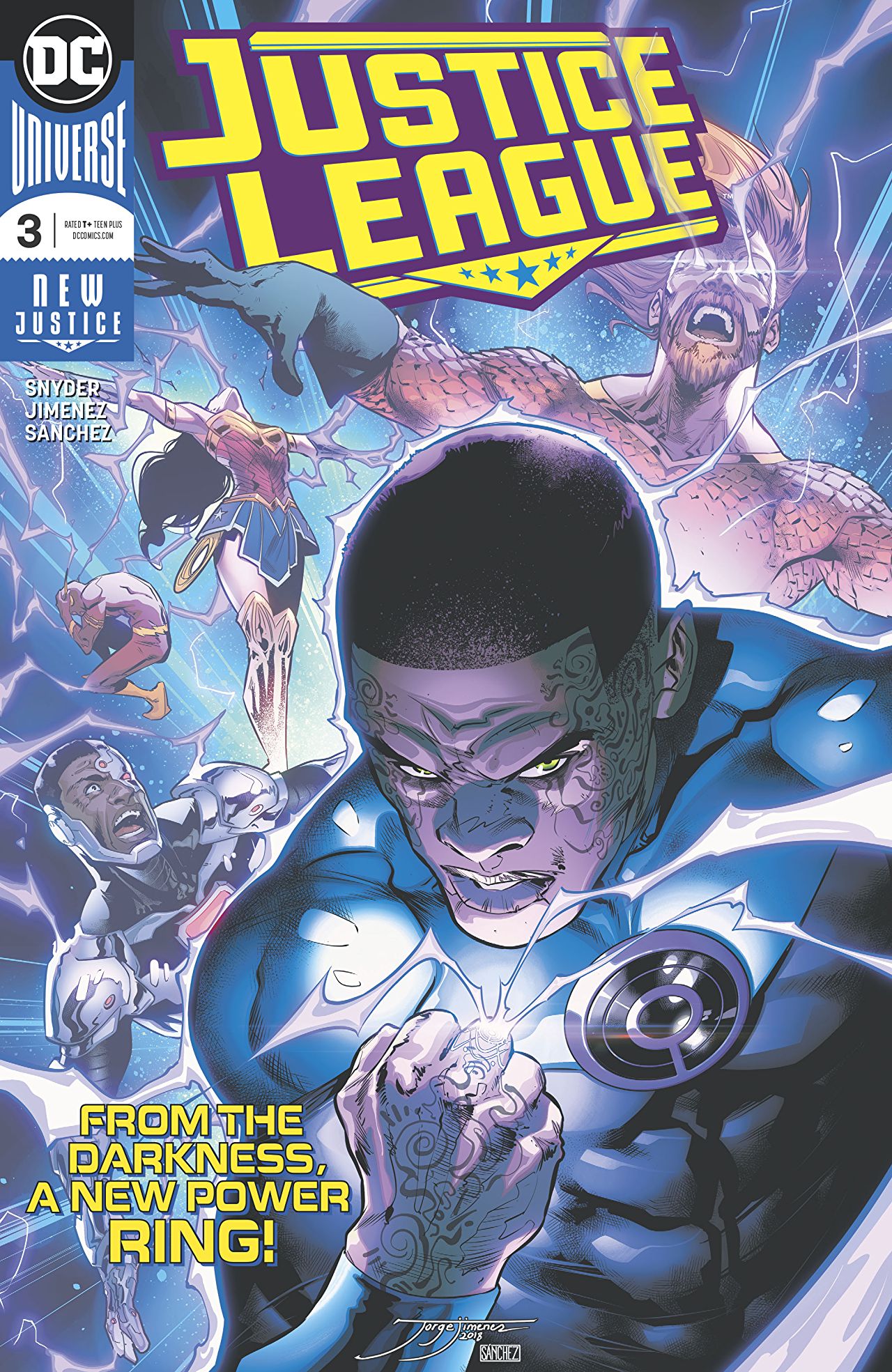 Overview: Literally everyone is being attacked by some unseen force, and then there’s the giant black ball that appears in the sky.

Synopsis (spoilers ahead): Years ago, we see someone exploring ancient ruins. It’s a young Thaal Sinestro. He discovers something in the ruins. “Umbrax?” he says, as a green streak of light approaches him. His life is forever changed.

John Stewart is currently under the influence of the ultraviolet light. He fights Flash, Wonder Woman, and Aquaman with ease. It’s not until Cyborg appears through a Boom Tube and strikes him with a concussive blast, that they are able to take him down.

Martian Manhunter and Superman are making their way through the Totality, fighting off giant mutated lizards and vultures. The protective suits they had one when they entered have worn away. They are now being infected with the mutagen that is being released through the air. Batman and Hawkgirl are fighting them off, but each time they destroy them, they come back… and in greater numbers. Meanwhile, Lex Luthor continues to lurk inside Superman’s body.

John comes to in the Hall of Justice. He tells the team of a mission he and J’onn went on. If how he is responsible for the destruction of Xanshi and it’s inhabitants. He went on a mission to find a way to bring it back; undo what he had done when he discovered Sinestro’s book. In it, his plan of keeping the invisible spectrum locked away, so no one could use it’s power. The spectrum’s “heart is a living phantom galaxy powered by a sentient black sun called Umbrax.” It’s coming for Earth and the only thing stopping it is the Still Force. Flash Google’s it and finds where the Still Force is located. Arthur recognizes it. He says that that ocean is toxic to all life as even metal erodes there. It leads them to Luthor’s underwater lair. Once inside, they come across a more animalistic looking White Martians in tubes, who break out and attack.

J’onn and Superman find the giant beings that are on the Source Wall and J’onn wants to understand them. However, he’s attacked by them instead. Inside his body, Kendra fights off the mutagen, as we learn Joker has sneaked on board as well.

John and Cyborg make their way to what’s left of the moon (Geo-Force is keeping the world in order without the moon) at the Watchtower base. Sinestro appears under the power of ultraviolet light and admits that he wanted to destroy it, but that he saw the truth and it changed him. Now he must show John that truth — Umbrax is here.

Analysis: Scott Snyder continues his initial storyline here and gives us more excellent pacing. The way he ratchets up the ante on each page is amazing. Seeing things start to connect is really cool. I love that all the characters feel important. Not one, in particular, is outshining the others and Snyder is definitely having fun with Lex Luthor. Seeing John Stewart play such a large role is really cool. I don’t feel like he’s gotten a fair shake, as of recent.

Jorge Jimenez continues to blow me away. His action is jaw-dropping, his storytelling is great, his panel layouts are always interesting his character acting is excellent, and he delivers Snyder’s pacing in a way no one else has captured. Alejandro Sanchez colors are as striking as they were last issue. The guy knows how to balance a page and draw your eye. He definitely works that here. Tom Napolitano letters and does an excellent job here.

Final Thoughts: With things starting to connect and the intensity ramping up, this book just continues to gain momentum.