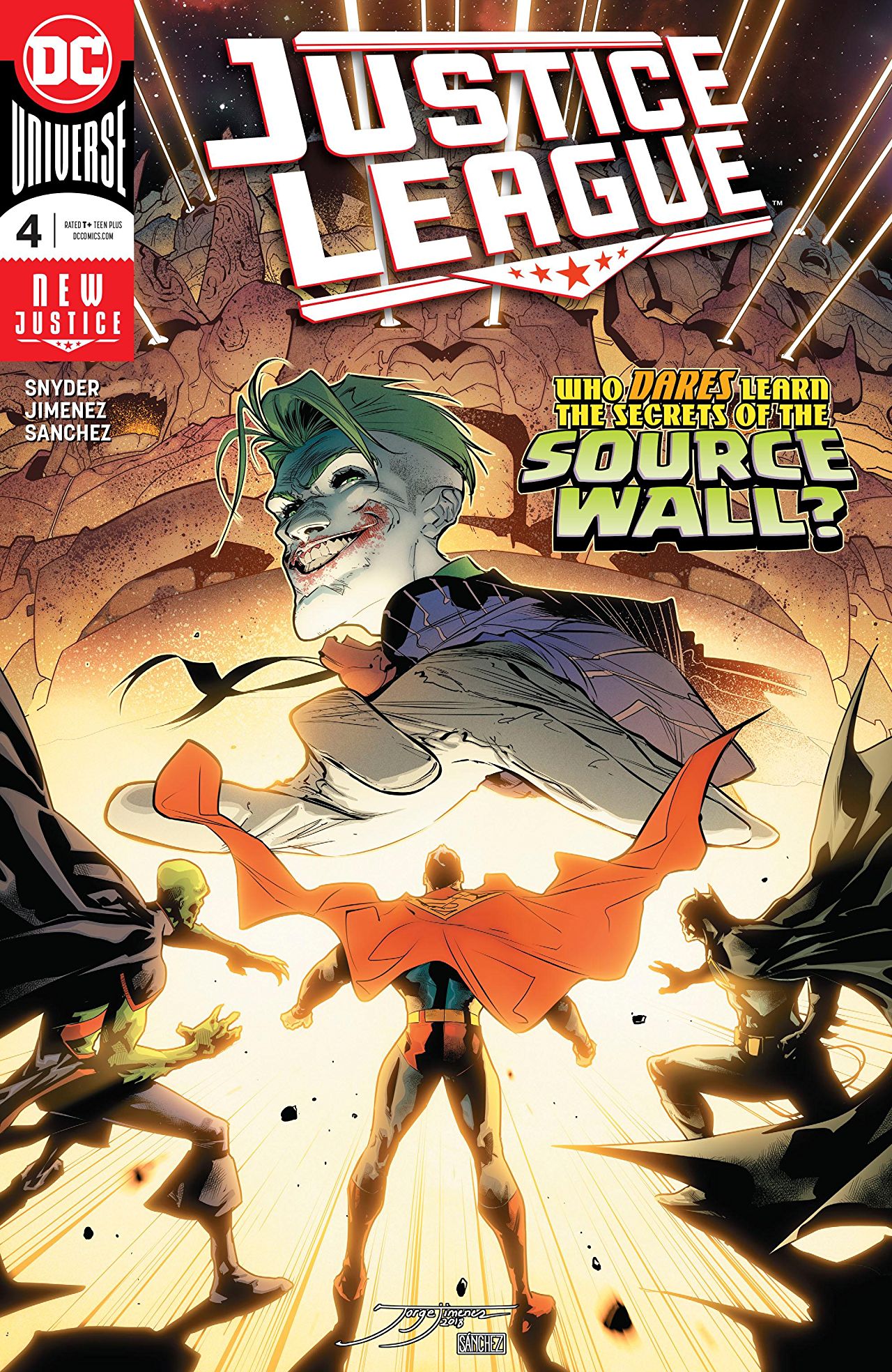 Overview: The Legion of Doom make their move and this time they mean business… Monkey Business.

Synopsis (spoilers ahead): When Grodd was a young ape, he was a runt. Because if this, he was bullied – beaten to toughen him up; to make him stronger. But none of the other apes had his abilities. Grodd had secrets. One of them being an explorer that found his way to Gorilla City. He offered young Grodd food, in an attempt to befriend the young ape. But Grodd saw past that into his true motives. That was a month prior. Now, using his gifts, young Grodd makes the explorer do what he would have done to Grodd. Forever dance to a watchful audience.

Currently, Kal-El and J’onn fight the Source Wall gods that are currently trying to kill them. Clark saves J’onn from a blast. Inside J’onn’s head, Hawkgirl is knocked out by the Joker, and her comms go silent. All Batman can hear is laughter. He can only think of two or three people who could pull off something like this; Brainiac is dead and Luthor, but he’s working with the heroes now, right? He’s interrupted in thought when his ship is suddenly being fired upon. Batman ejects but is eaten by a larger creature with sharp teeth. Batman is now surely dead and we will never see him again.

On what’s left of the moon, Green Lantern and Cyborg are about to throw down with Sinestro. They give him their best shot, but his power is too great. He absorbs the shot, and then easily destroys John’s power ring.

On the ocean floor Wonder Woman, Aquaman, and Flash are handling the monster creatures pretty handily until none of them can move. Grodd has entered the room with a baby strapped to his chest. The baby is a Turtle, somehow young again. Grodd brings Cheetah and Black Manta to the attention of the other two heroes and releases them from the Still Force; except Diana and Arthur are being fooled. They are fighting each other instead. Flash attempts to stop Grodd, but instead, he begins giving the Still Force more power and thereby unlocking the door if the doorknob in Luthor’s possession.

Across the cosmos, J’onn feels this disruption and Clark gets them both out of there. Clark asks him what is going on with him. J’onn tells him off a Martian takes with the duty of remembering the history of Mars, named the Keep. He found her in Thanagar, but she was old and her memory was damaged. However, she confirmed to him that what destroyed Mars was a telepathic plague called H’onmeer’s Curse. It takes the form of whatever it’s host worshipped and turns that against them. For the Martians, it was fire. When Vandal Savage was killed, he sent J’onn a vision of a Martian child imbued with something ancient and terrible. He also saw other horrors. He saw the end of everything. Clark thanks him and consoles him. He tells him that all of this is his fault and that he is the end of everything. A smile appears on Superman’s face. “Hello, J’onn. I warned you that we’d be seeing each other soon.” Joker then digs in, planting himself into J’onn’s brain.

Meanwhile, Sinestro begins recruiting members of his new Corps… Everyone on Earth.

The Still Force reaches full power and the universe expands, and suddenly stops. The Still Force has unlocked the barrier to the invisible spectrum and Umbrax recruits the rest of the planets he has control of to Sinestro’s Corps – now larger than the rest of the Corps put together. Luthor’s doorknob glows and hums in his hand. The mind-controlled Superman and Martian Manhunter walk toward the Totality. The Multiverse itself.

Analysis: Scott Snyder continues through this complex weaved story. I understand if you don’t tend to like this style of comics. I know that many readers of Batman tend to stick with the more grounded take on superheroes. Personally, I like variety. I enjoyed parts of Geoff Johns run on Justice League, but overall I didn’t feel like it was a must read book. This feels like a throwback to me. Although I wasn’t reading comics at the time of Grant Morrison’s run on the JLA, this is how I imagine it felt. I love how Snyder has focused on the villains of this story. The way everything has come together. The interconnectivity. It’s all very impressive to me from a storytelling perspective. I don’t know how Snyder juggles all these balls at once and then ties them all together. I also feel like Snyder is doing a fantastic job of being true to these characters. Their personalities bleed through the page.

I am a huge fan of Jorge Jimenez’s art. The guy does everything extremely well. I never understood why he wasn’t a big name during his days on Earth 2. His storytelling is always on point. His action is great. His layouts are always interesting. And his character acting is some of the best in the business. Superman’s turn is extremely creepy, especially when you see the look on his face. If you are an artist in need of pointers with your craft, you could definitely look to Jimenez as an example to emulate. Alejandro Sanchez’s colors are striking. The palates he uses are always bright and his use of light is some of the best that I’ve seen from colorists. Tom Napolitano letters here, and does a fine job. His font choices were really well done.

Final Thoughts: I wonder where this story is heading and I’m still not sure what the Legion of Doom’s plans are exactly. Are they planning on destroying the Multiverse?! They wouldn’t, though… Right?… Right?!