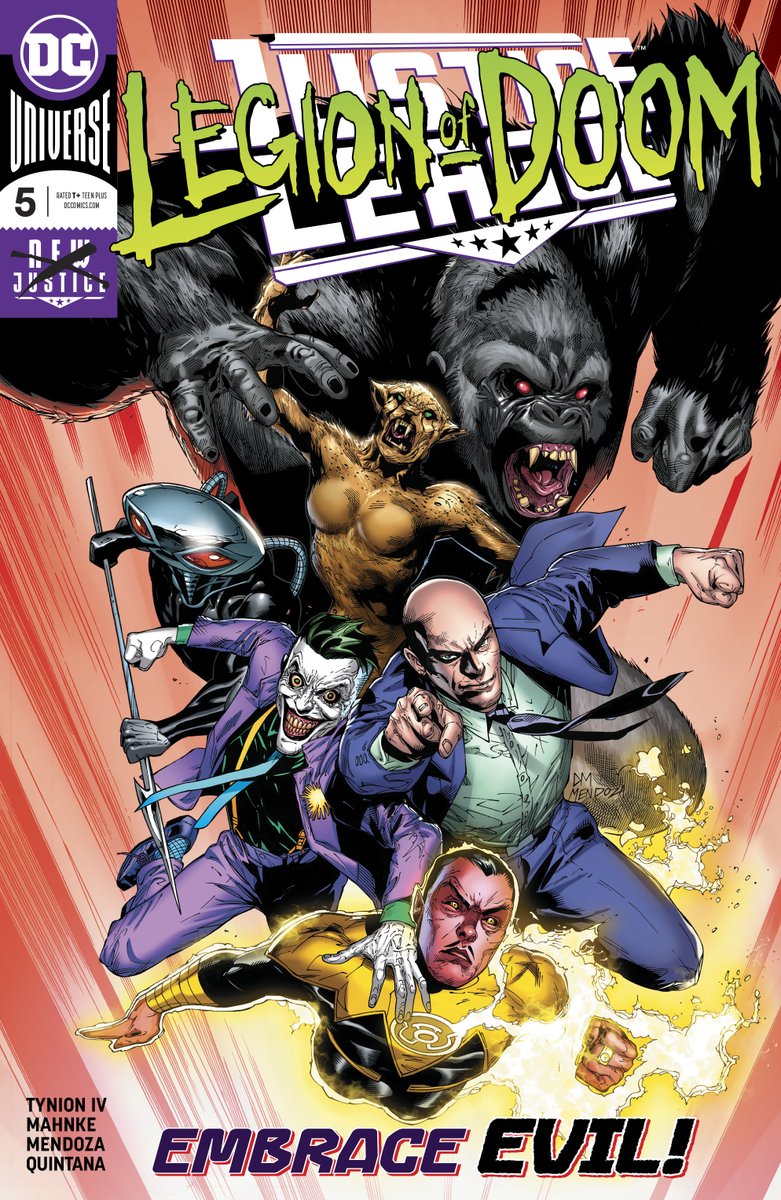 Overview: Lex Luthor establishes himself as the biggest bad the DC Universe has to offer.

Synopsis (spoilers ahead): Across the DC Universe, a disturbance is felt as Lex Luthor is about to make his wildest dreams come true. And it all came true because of the weapon of mass destruction that Lex keeps in his pocket.

At the edge of the universe, the Green Lantern Corps are working together to hold the dark energy at bay. A call goes out to the Lanterns – all of them – to help keep the universe intact. Sinestro receives this message just as a hologram of Lex Luthor appears. Lex points out Sinestro’s inner confliction. He wants to take advantage of this opportunity, but he can’t be the reason for the destruction of our universe. Luthor tells him that he had unlocked the secret history of the universe in full, and he has the key in his pocket. He’s forming a team. Sinestro is interested.

Days ago, Luthor saved the world as one of its heroes… Again. He’s been doing that a lot recently. But this last time was different. He learned that humanity’s dominant trait was entropy. Meaning that all the time he spent as a hero was useless. He unlocked a Mother Box and stole it’s fuel source to travel in time. He wasn’t going to be fooled, even by himself. He traveled to the end of times – one million years into the future, where there are no gods left… Only Luthor. Humanity has risen to rule the universe because they finally accepted their true selves. They stopped lying to themselves, saying they could be heroes. Luthor was known as the Great Tragedy. The one who saw the truth, but missed the key to unlocking it in his time. Lex demands to know what the key is. They refuse to tell him but show him the symbol. They call it Doom.

Luthor meets with Grodd at the United Nations General Assembly, and Grodd forces everyone to fight while they talk. Lex tells him he knows how to stop the Speed Force and how to take control of the universe. This hooks Grodd.

Lex remembered the villains of the universe telling him that he MISSED something, meaning that it was right under his nose. He retraced his steps and came to his father’s Legionnaire’s club. He destroyed it for fun and came across something he wasn’t expecting; a door with a glowing knob. A knob he put in his pocket. Through the door, he found a basement that was much older than the building itself. It told secrets of the future. Prophecies that had yet to be fulfilled. A coming Totality that possessed great power and the symbol that was the key to unlocking it all; the very doorknob he possesses. But he needed a few things including someone to command an army of the invisible spectrum. He needed to find the next Turtle and someone who could control the baby with amazing abilities. He needed seven in total to control each of the seven abilities listed inside the papers inside that basement. And as he picked up the knob, it echoes throughout time. As light swallows up the future, erasing it from ever happening, the people know what this means; Luthor found the key. They cheer him on, and he can almost hear them. He pilots Superman step by step. As he inches closer to fulfilling his destiny, he reaches out to unlock the Multiverse with a doorknob. And on its rounded edge is an inscription of the symbol: Doom.

Analysis: James Tynion IV delivers a masterpiece of an issue. He does an excellent job of establishing what is driving Luthor at this point. His knack for nailing the characters’ voices and their characterization is well done. That’s not to say that this issue is perfect. Although Tynion works the current storyline into play and does a fine job, it does disrupt the flow of Snyder’s story. Whether that is Snyder falling behind and fabricating a way to be timely on his end, or an editorial decision to essentially do the same thing is as big of a guess to me as it is to you. It’s somewhat jarring when looking at the series as a whole, but in this single issue, it works really well. I really like the narrative that Tynion goes with here. The circular style storytelling adds a sense of completion by issues end and is very satisfying. This issue also fills in some holes that Snyder had left in his story. I don’t know how I feel about that, but Tynion does an excellent job answering those questions.

Doug Mahnke does a fine job here. His art reminds me of Ethan Van Sciver. He does a great job of storytelling, but his art starts to slip towards the end. I know the Flash is trapped in the Still Force, but his anatomy is off. Of course, this could be a storytelling technique, as he is trying to convey the inability to move in a medium that is, in fact, still. So maybe I’m being a bit too picky. The next page looks off to me as well, though. It’s the Legion of Doom inside of their lair and the perspective looks wrong to me. If you are a fan of Mahnke’s art, this is what you come to expect from the guy – a very solid artist.

Jaime Mendoza inks this issue and I think his style is my main issue with Mahnke’s art. Let me explain. I always feel like Mahnke straddles the line. His work is clean and sharp, but then his facial expressions are extremely exaggerated and cartoonish. Then he worked on Superman with Tomasi and would follow up an issue by Patrick Gleason and the similarities in style would blow me away. If Jamie Mendoza would loosen his style and do thicker highlight lines and thinner, along with a fewer amount, of detail work, I feel like the art would have a more consistent flow. Let me be clear, Mendoza did nothing wrong, nor does his work look bad. I just felt the need to express how I think the art would look better, in my opinion. Wil Quintana colors here and does a fine job. He does great picking a color palette for each individual scene in the story. This adds great consistency and establishes a tone without having to alter the color or a character. This style of coloring also adds to my suggested change of the inks on Mahnke’s pencils. Tom Napolitano letters this issue and does a great job here. His placement was excellent and I like the font on Grodd’s words. It makes you read it in a groveling voice.

Final Thoughts: Although it’s a jarring place to take a break, Tynion delivers an excellent script that adds to the finer details that have been left out of the story so far.