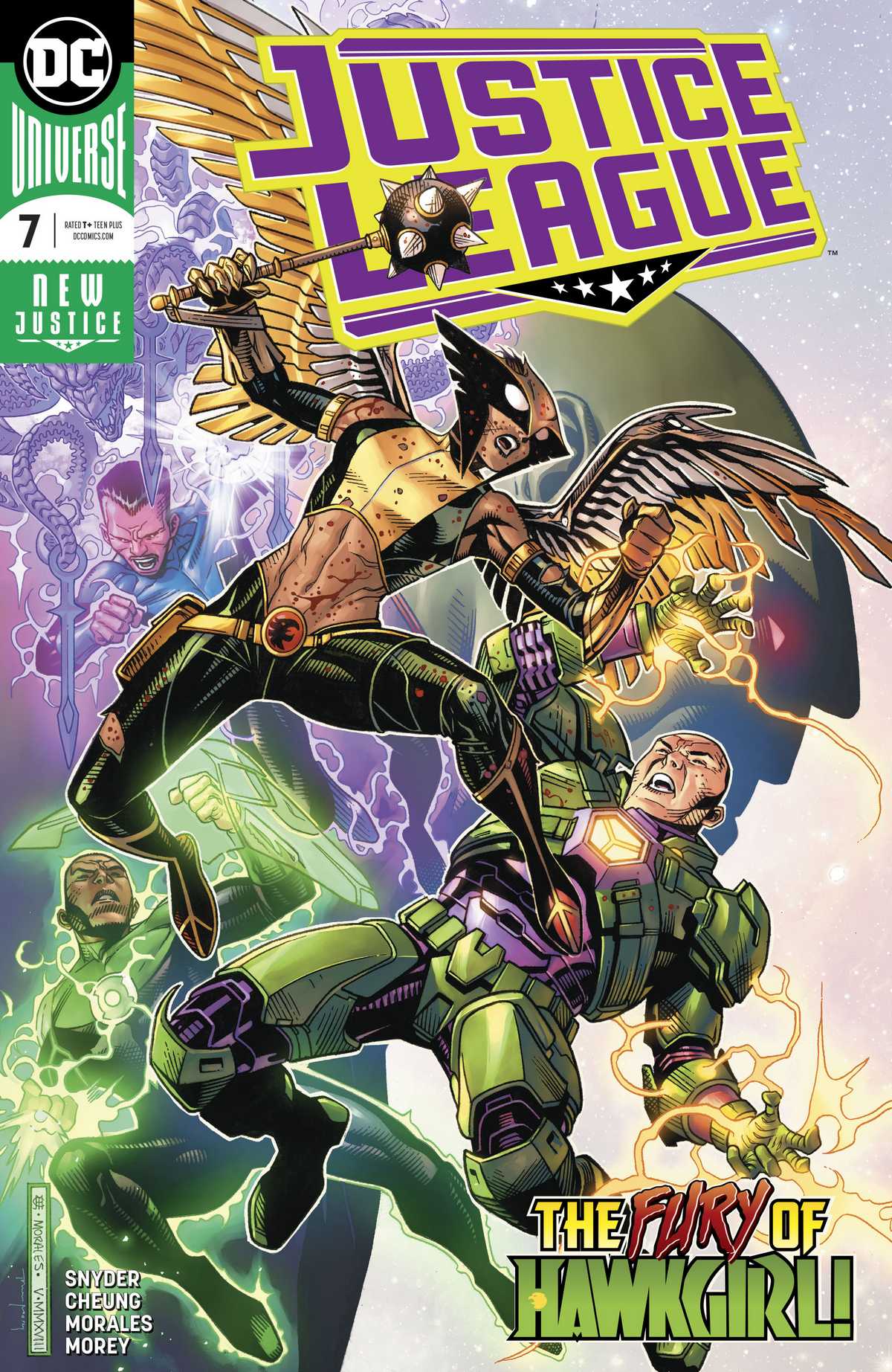 Overview: The Justice League save the world and gain a new power, but come away with more questions than answers…

Synopsis (spoilers ahead): In the early days of humankind, the late Vandal Savage was its champion. His spoken name was Vandaa – which meant “Judge” – which means bringer of justice. He lived up to that name. As leader of the Wolf clan, he battled against anyone who held humanity back. Until he found the Totality and uncovered the secrets it held. From then on, he had a new mission; he’d be an enemy of man, and bring injustice if he had to because if anyone else unlocked the secrets that he knew, it would mean doom for us all.

Hawkgirl attacks Luthor just before he can open the Totality. Her glowing Nth metal wings are having a strange effect on the doorknob. Luthor attempts to fix this problem by breaking one of her wings. With the people of Earth connected through J’onn, the White Lantern light shines through the darkness that is trying to consume it. Sinestro destroys the Speed Force car that John Stewart was driving. And Barry loses control of the Still Force.

The neighboring planets are set to fire upon Earth, but Superman launches at them, giving them just a bit more time. Aquaman tries to call to the sea life to help them just as Manta, Cheetah, and Grodd are about to finish off the underwater lair, but to no avail. The walls are blocking his signal. He bursts out the wall and Wonder Woman seals it off by plugging it from the inside with some machinery. Aquaman chases them off with a pair of Megaladons.

Hawkgirl stabs Luthor in the shoulder with a fragment of her broken wing. And Flash finally reaches optimum levels of the Still Force. Doing so causes him to see inside the Totality – the ugliness inside – the dark truth behind everything. He pushes through and closes the door on Umbrax.

Sinestro has been toying with John this whole time, and now that he sees that they have failed, he’s not happy. John reminds him that on top of being a soldier in his past, he also used to be an architect as he conjures a new Green Lantern ring, and proceeds to drop a skyscraper on top of him. Kendra reaches into the Totality and Luthor is sent back home. He calls for a retreat, teleporting all the others back to the base also. Superman made it back just before the door was closed. He does his Batman impression and everyone is impressed with it. Kendra is at the site of the Totality. We hear J’onn talking of how they broke the Source Wall. Because of that, their universe is slowly bleeding out. They plan on healing the breach, but if they fail, the Totality could be their best chance of saving their realm. But with all that power, do they dare possess it? Kendra takes hold of it with both hands. It’s placed inside the Hall of Justice.

The League is riddled with questions. What’s going on with Kendra’s wings? How did John create a new Green Lantern ring? J’onn needs some answers too. He’s going back to Thanagar Prime to get information from the Martian Keeper. He asks Kendra and John to join him. J’onn apologizes for not coming to John himself and the two bro-hug it out. Superman tells J’onn that they choose him to be chairman because he’s empathetic, and he can share each of their fears with one another. He asks him to share his. J’onn feels that they are the ones holding the universe back. That they are the villains.

Arthur and Diana discuss the underwater bunker they were in. Whoever made it had merged technology from Themyscira and Atlantis. They try to figure out how to handle that when they hear a loud boom come from inside the Hall of Justice. Diana points out that boom tube technology doesn’t work inside the Hall. They rush inside the room to see Starman, “I come from the past. I have all the answers you seek! But to learn them three of you must die!”

Luthor mulls over what could have been. He was so close. He snaps Vandal Savage’s cane and takes the knob of it. He uses it to open an invisible door to a secret room. One that he had locked a monster inside. One whose help he needs. The Batman Who Laughs.

Analysis: Scott Snyder’s script here has the same problems I talked about in the last issue. It felt as though we played out the same emotional beats with the same characters the last three issues. This could have easily been chopped down to a four issue story, and I would have been more satisfied with the end result. It’s like taking a road trip with your dad and he’s taking “the scenic route.” You like where you’re going, and there are parts of the drive you enjoy, but you could have cut a whole day out of that four-day road trip. (Focus, Corbin) There are also points where things just don’t make sense to me on a logical level; like Arthur mentioning that the underground lair will implode if Manta strikes it again. So he busts out through the wall?! How does that building not just crumble like a pop can? And how does Diana plug something from the inside? I get that she’s strong, that just doesn’t seem like it would ever work to me, especially with the water pressure. But I could be wrong.

The dialogue is still horrendous at times. “Be gone, Hawkgirl! I said be gone!” – This is what I goofily say out loud as I kill a bug that has made its way into my house. “Unh! Sinestro!” – This is what ten year old me would have said to my sister when I caught her smashing my favorite Hot Wheels together. “#$%^!” – … At this point, I’m just distracted trying to figure out what four-letter word she called him.

Jim Cheung, Walden Wong, & Mark Morales handle the art here. I really like Cheung’s pencils. It is very unique to other work that I’ve seen at DC. He’s a great storyteller. The way he directs your eye through the page is a skill few artists have. His art is also just pleasing to the eye. His superhero builds are just great. They look like they fight crime on a daily basis. There was one page that did not look good… The inks on this page stand out to me. I know they are trying to convey light emitting behind him, but the page just doesn’t look well. The colors aren’t doing it any favors either.

Speaking of colors, Tomeu Morey handles that this issue. Other than that one page, the rest of the issue looks great. Colors pop, yet they are saturated at times depending on the lighting. Very well done. Tom Napolitano letters this issue and does a solid job. I even enjoyed the font used when Clark is mocking Bruce. They use an old English style font, which gets the point across. It was a fun little gag.

Final Thoughts: This was an exciting end to a story arc while continuing to set some very interesting things for the future. I just wish that this would have been about two issues shorter and the dialogue didn’t hurt so much.