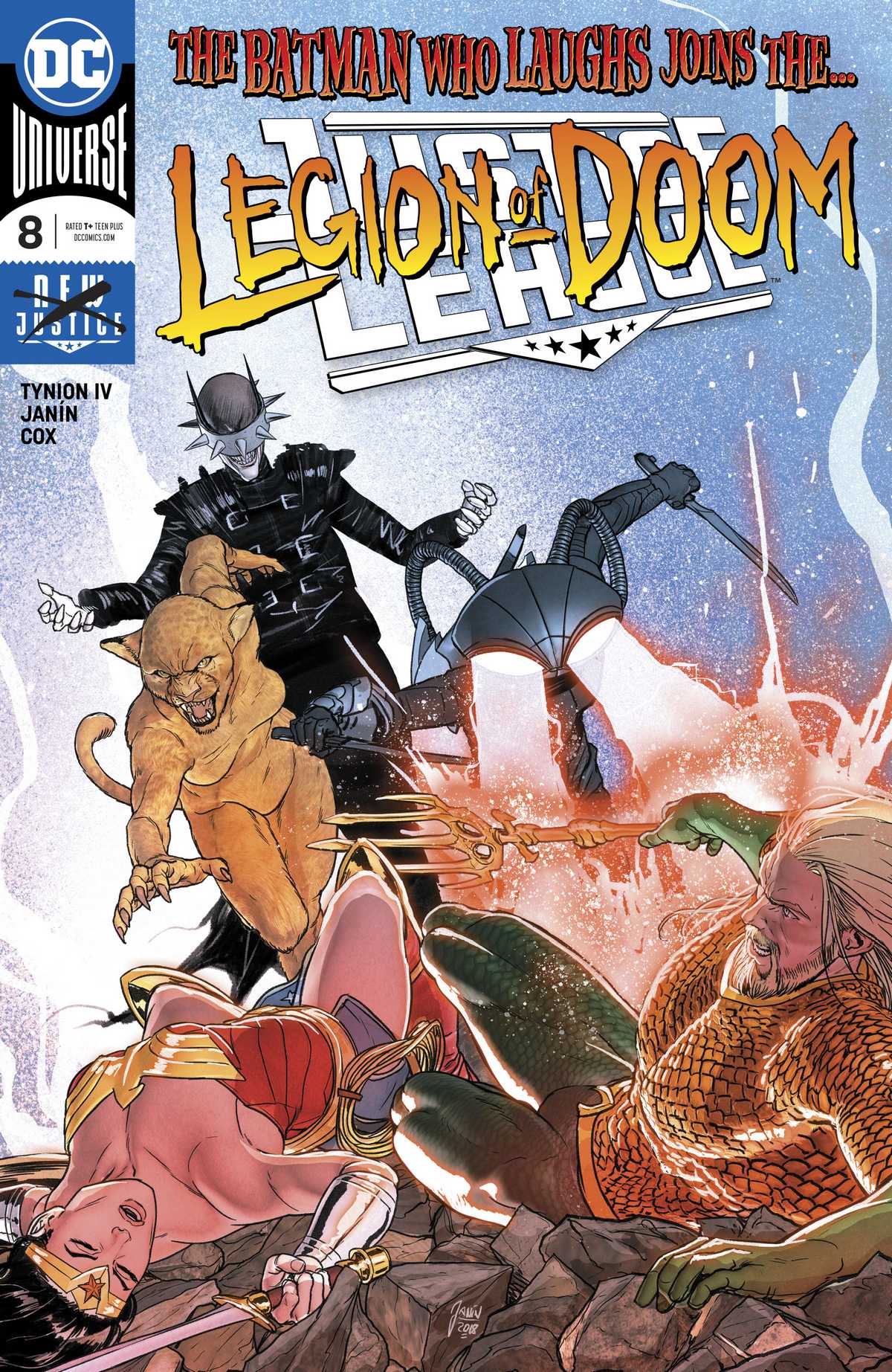 Overview: Luthor and the Batman Who Laughs strike up a deal, while Manta and Cheetah set phase two of their plan into motion.

Synopsis (spoilers ahead): 1988, Utah, USA – Scientists have launched a satellite into space; it’s purpose? To capture some of the limitless energy of the Totality as it flashes across space. In that, it is successful in doing. However, it is too much energy for the machine to handle, and it backfires back toward the Earth. This energy accidentally strikes an unsuspecting target – one Will Payton. He becomes a hero of Earth, calling himself Starman, as the scientists search for him to uncover the secrets that are now in his DNA. That is until a man from the future comes to him. A man with a hunger for knowledge, and he wants more – he has a few questions about the end of the universe.

And from what Martian Manhunter can gather, that’s where Will Payton’s memories end. There are bits and pieces of Luthor torturing him, but it looks as though Luthor extracted the information he wanted. The League may have the Totality, but Luthor is still winning the battle.

We join the Legion of Doom as Luthor just informed Joker, Grodd, and Sinestro of whom he has locked deep inside their lair. None of them like it. As Joker says, “You don’t put a Batman in a cage without him wanting to be there.” It’s from here we pick up where we left off – Lex Luthor asking the Batman Who Laughs for help.

(Okay, I’m just going to start calling him something different from now on…) Giggles is being very vague with Lex. He’s guiding him, but not giving him any answers. Lex grows frustrated when Giggles reaffirms Joker’s fears. He spits a dark metal pick onto the floor, “I’m here because I want to be.” He laughs. Joker hates that sound. Giggles tells Luthor of his weakness; the reason he never wins – he refuses to humble himself to a higher power. The universe isn’t destined for him. It doesn’t need him, but he can still take it. He proposed a deal with Lex; he lets him free, and let him do as he wants and he’ll stay out of Luthor’s way as well. Luthor accepts the deal in exchange for HER name; the one whom the dark forces of creation were locked away from – the one whom the Source Wall was built to imprison… Perpetua. And if Luthor unlocks the seven powers she once wielded, he will unlock her. But where she is, is a mystery.

Newfoundland, Canada – Manta and Cheetah make their way to shore. They inform the fisherman that they are looking for a Captain Proteus. The one who gives them information to find him will be spared. All point to the lighthouse nearby and Manta incinerates them all. They see an old man walking on the docks and recognize him as Proteus. Cheetah easily chases him down and slices his throat open with her claws, which has been tainted with the Tear of Extinction. The Graveyard of Gods now calls to him through the crashing waves of the sea, the firstborn of Poseidon. Through his corpse, they will unleash something that he has kept trapped, which will down the world. Cheetah has dreamt of killing a central player in Diana’s Pantheon for years. She looks forward to seeing the look on her face.

Back at the Hall of Justice, Batman and Martian Manhunter discuss their plan of action. Bruce will try to get more information from Starman. And J’onn will go get answers off the planet. They leave the Totality, and J’onn mentions that although it worked with Hawkgirl, they would be fooled to believe that it’s on their side. If anything, it’s on its own side. As they leave the room, we see someone trapped inside the Totality – a woman – Perpetua.

Analysis: James Tynion IV delivers a solid script despite all the setup he has had to do. It’s filler, but as a good pie, it’s filler you need. One this thing this series had done is establish Lex Luthor in a way I’ve never seen him before, and that had been enjoyable to see. The scene with Giggles has me conflicted. It was a cool scene, the dialogue was intriguing but the way it was done left me wanting – I’ll get more into this later. And then you have the part with Manta and Cheetah. I really like how the two bounce off one another; they feel like a natural fit – great chemistry. Their skill set is also very complimentary and I like that when Cheetah kills Proteus, she immediately thinks of how this will affect Diana. I haven’t seen much of Cheetah in my own reading, but this makes me want to go back and learn more about her. Another thing I appreciate about Tynion is how he captures the voices of these characters, unlike my main complaint with Snyder these last couple of issues.

Mikel Janin’s art itself is great. He inks all his own art here, and it had a very crisp, clean look too it. However, in that scene with Luthor and Giggles, there should have been a little something there to build the tension. A panel progression that builds and builds and then counts down again. Camera work that progressively gets closer and closer. Something that would act as a ticking time bomb in your head. There was also a lack of continuity in that scene as well. In the last issue, Luthor was in his power suit. Here, he’s wearing a business suit. It’s not really that big of a deal, but when the dialogue is exactly the same, details like that stand out.

I feel bad because after seeing June Chung coloring Mikel Janin, it’s really hard to go back to Jeremy Cox. Cox has a hard time establishing a mood or a tone that matches the scene. His colors are bright, to the point where it’s hard to figure out where light is emitting from because it’s instead just bouncing off of everything. The colors he uses in the interrogation scene are too similar, and therefore, they don’t compliment each other. The most interesting panel is the one where Manta is killing all the fishermen because that one panel establishes a mood, but then it carries on from there just like the rest of the comic. Cox did some good stuff here. I’d just like to see him ratchet it up to the next level. Tom Napolitano letters here and does fine on the letter placement and font. I just still hate that Batman Who Laughs color choice. It continues to be difficult to read.

Final Thoughts: This issue is all set up for three different things; Drowned Earth, The Batman Who Laughs, and a Starman. Which leads me to believe he will also be getting a book to focus on him in the future. Despite all the setup, this did have some enjoyable moments.