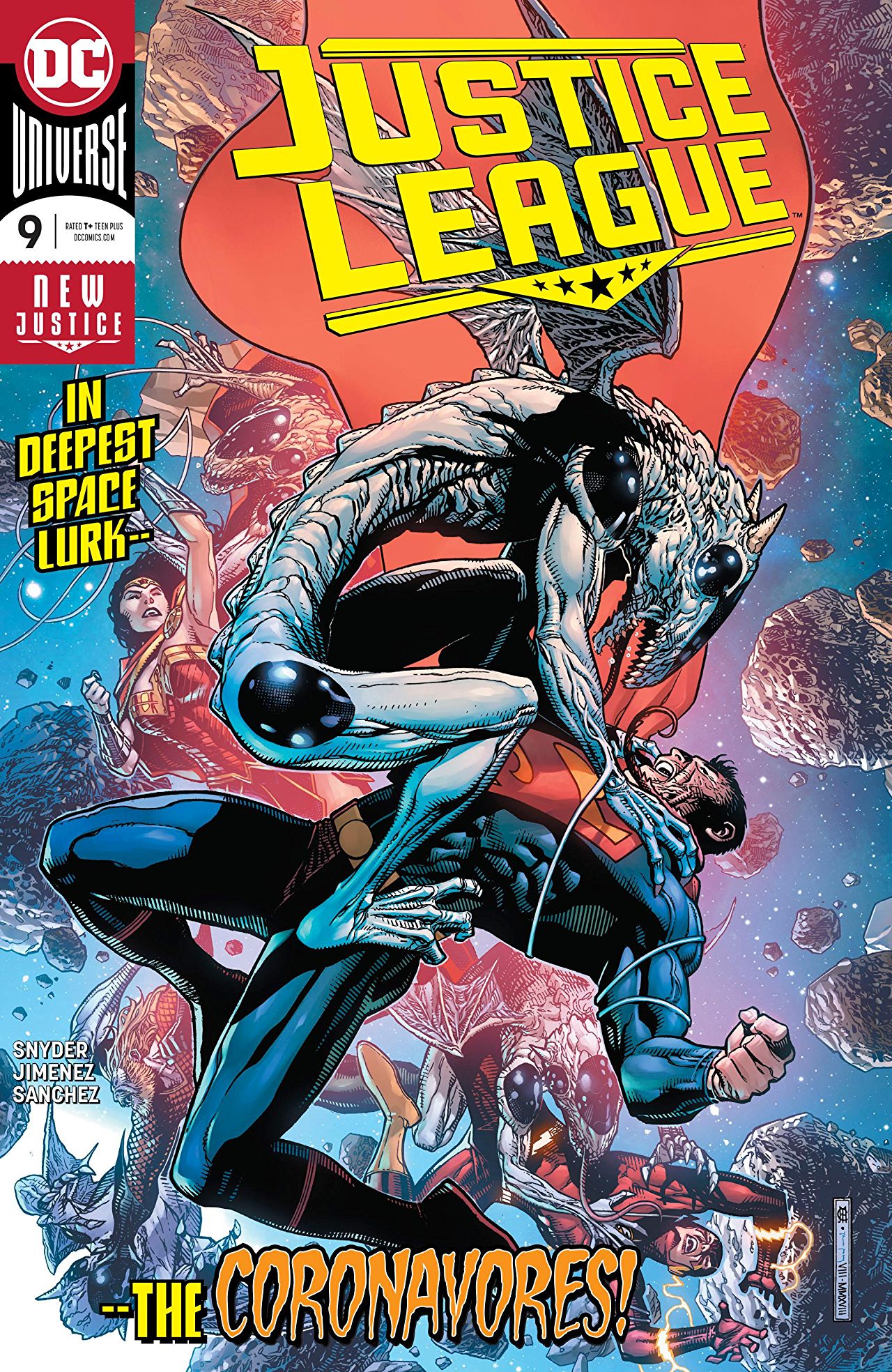 Overview: Green Lantern is skeptical of eating food from a magical bull-chef, Diana shows off her carpentry skills and builds a chapel, and Clark one-ups those skills by building a moon.

Synopsis (spoilers ahead): Superman is putting the moon back together piece by piece. Batman is trying to convince him to stop; they have more pressing matters at hand. Superman refuses to stop until he is attacked by a pack of Coronavores – a monstrous alien scavenger that feeds on dying solar energy. Batman is worried about a Mega approaching and tells him to stop.

At the Hall, Batman is getting a surgical procedure done by Alfred via Mr. Terrific’s orthobots. Batman tells Clark that they should focus on the Totality, and then realizes that something is coming.

The Hall of Justice is a busy place tonight. It’s an open house and full of people who are learning of their favorite heroes. A recording of the Flash comes over the loudspeaker, giving them more side information and making them feel closer to the League.

Upstairs, John Stewart looks down at all the happy visitors in a cafeteria full of his peers. Flash appears, noticing that John looks down, and asks him what he ordered. As it turns out, they got a new chef, Ferdinand – he can replicate any food around the world. John ordered a burger from a joint in his hometown of Detroit; a Drecker’s Tripple Decker. He’s not eating it though. His whole life, he’s believed in structure. But now, with his whole life turned upside down, he doesn’t know what to believe. To help ease his mind, Barry gives John a little more structure in his life. A genuine Drecker’s Tripple Decker.

Arthur catches Diana building a chapel inside the Hall and begins to help her. He points out that Poseidon has gone missing and the waters have been still. Diana points out that magic itself has been strange too. He asks her if that’s the reason she working on a chapel and a discussion of their personal quarters comes up. Arthur has a sea themed one, with his Father’s old ship being the focal point. Clark’s room is completely open, visible to all. He has a computer, spare change of clothes, prize newspapers, and pictures of his family. Batman has a sealed off bunker with “keep out” spray painted on the doors. Barry has a lab with a cosmic treadmill. John has a small space with a cot, backpack, blueprints for a structure, and an American flag draped on his wall. J’onn has built an empty room that allows him to recreate whatever he wants inside his mind. Kendra essentially has built a museum with numerous weapons and artifacts. Diana built a chapel because she feels at home where there’s faith.

Martian Manhunter and Kendra are sparring, testing to see how well her wings have healed. She’s not holding back, though, and gives him a pretty good beating. She asks him over and over again if he knew the effect the Totality would have on her and if that’s why he brought her in with him. She feels used. J’onn tells her that he didn’t.

Batman has gotten into an armored body cast and has called the League to help Superman. A mega is almost there and it could drain all of his solar energy, killing him. Superman calls his bluff and tells Bruce to call the mega off. Batman reluctantly does so. He’s now irritated, but he – along with the world – is in awe of the newly repaired moon as they look up to the sky.

Analysis: Scott Snyder tells a fun, light-hearted story here. It’s a single issue (some would call it filler) but as crazy of a start as we’ve had, we need a moment to breathe and this issue delivers that.

I like the character interaction we get throughout this book. John Stewart and Barry’s interaction is great. Although, Barry has just fully become Wally at this point. The way he talks, his expressions – they are all Wally from the animated series. Which, let’s be honest, is irritating for Wally fans, but Barry is just boring otherwise. But him picking up John’s spirit was cool to see. Kendra comes off as much of a bada** since she really is. She’s understandably upset and I wouldn’t put it past J’onn to not give her all of the information. She’s just a really cool character.

The Hall being open to the public was a cool thing to see, and it also felt real. It was heartwarming to see the League open up it’s doors to average citizens. Diana and Arthur’s interaction was awesome. Arthur is trying to help her find her way, but she’s already forged her own path. I do worry about Diana. I hope she doesn’t feel like an outsider. The two have also been very friendly recently, and I hope Snyder isn’t trying to ship the two. I’d give Mera full permission to go full Super-Saiyan on them.

Again, my main problem with Snyder’s Justice League is his characterization of Batman. He’s my least favorite character in this book. He’s a douchebag. He’s complaining because Clark is wasting time repairing the moon. He thinks their time would be better spent studying the Totality. So instead of using what resources they have, he calls in the entire League to help Superman fight an alien monster that HE HIMSELF CALLED TO ATTACK SUPERMAN. Do you not see the stupidity in that?! Talk about wasting precious time. And what if someone seriously got hurt in this? Clark laughs it off, but I’d be kicking his (butt) out of the freaking League. That’s not a team player. That’s not a smart move. That’s not someone whom I will trust my life in.

Jorge Jimenez’s art is amazing here. I love his acting on the page. The character dynamics through his art is what drives this issue. The amazing scenes (easter eggs galore) in the cafeteria, the amazing characterization through each League member’s personal space, the body language and facial expressions. They all ooze personality out of each page. Alejandro Sanchez’s colors are as beautiful as ever. It’s been mentioned in my reviews, as well as others on this site how well he uses light in his coloring, but I’ve been curious how he performs when under night scenery. The results are in and he’s still great. The backdrop, the skyline – the tones as give a nighttimes vibe, but the cities are still bright at night just from all the lights. The city, the buildings all emit that light in a natural way keeping those colors bright, but still believable. Tom Napolitano letters this issue and continues to be strong. The letter placement is excellent and his font is consistent. They are still using the Martian Manhunter mind link thing, which got confusing real quick because I couldn’t tell who was taking. They use the main color of the character’s costume to highlight the word balloon and some characters share colors, so I would quickly get lost. Here only Batman and Superman are in direct communication, so it was very easy to keep track of.

Final Thoughts: This was a fun, one-off story that had great characterization (with the exception of Batman) and great art. It made me like this group of characters more. They feel like a real group of people working together.