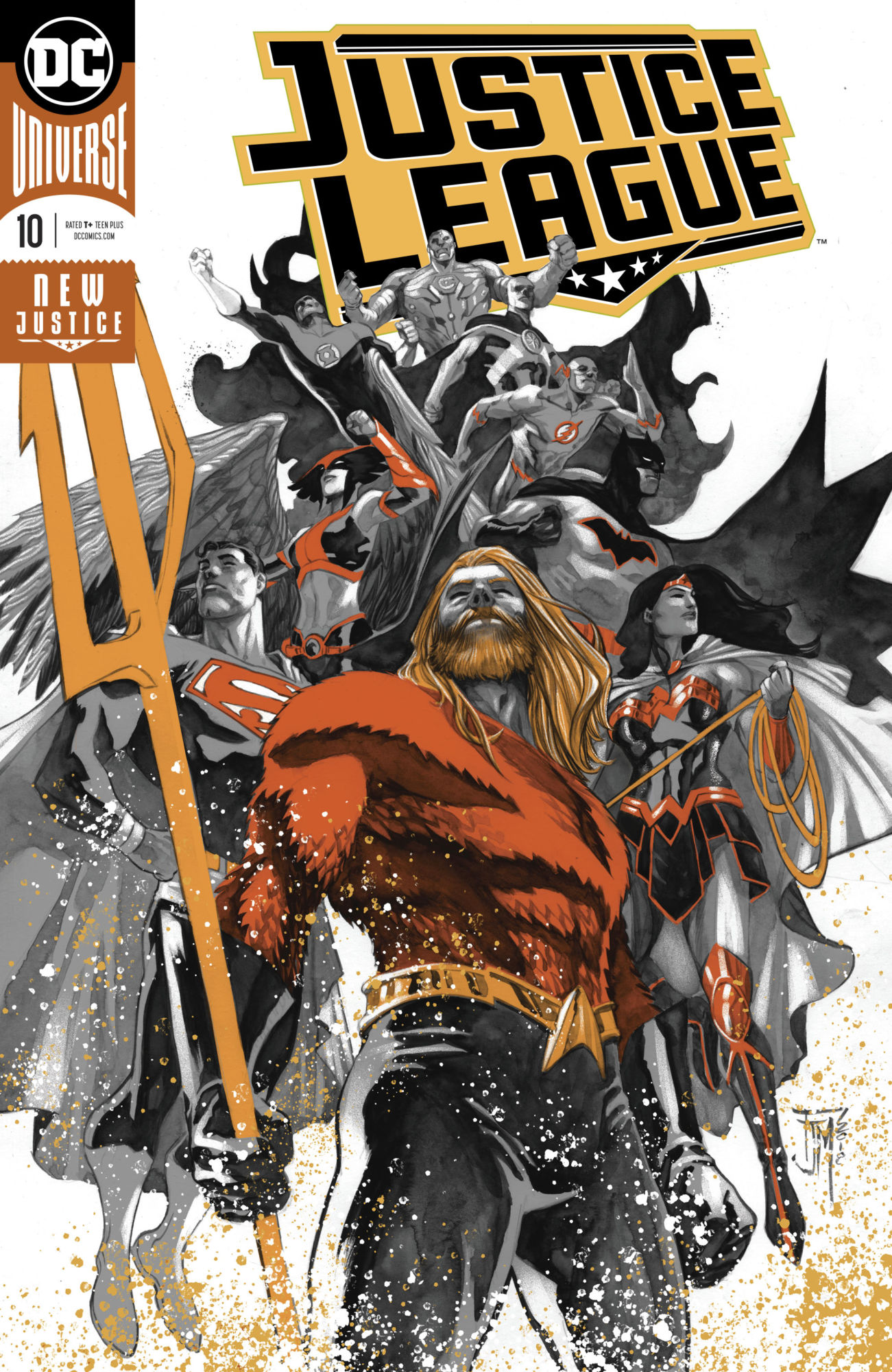 Overview: Arthur Curry grew up wondering of new oceans yet to be discovered existed and now he finds out.

Synopsis (spoilers ahead): Years ago, in Amnesty Bay, a young Arthur Curry is out on a boat, fishing with his father. Arthur wonders of new oceans yet to be discovered.

Currently, Arthur is at the Arctic Circle with Diana and Firestorm, searching for a particular ship. One that matches the tiny one Arthur holds inside a bottle. It was one of Poseidon’s ships. It comes to life when it draws closer to its source. Diana recalls a story of Poseidon locking away the key of the Graveyard of Gods inside one of his ships. They come across multiple ships underneath the ice before they find the right one. They can only assume these crews were doing the same as they are now.

Meanwhile – on Veracity Island – Superman, Flash, and Adam Strange fight off the Volcano Men. Once done, they examine a spot at the heart of the volcano. Strange sees that they used some sort of Phasable Energy similar to Zeta Beams. They determine that the Legion of Doom’s base was here, but also wasn’t at the same time. They also find traces of a launch trail leading off into deep space. It was a beacon that was sent out. Batman traces it out to an alien piece of corral – part of a cosmic barrier reef. However, he cannot analyze it from the Hall of Justice. Superman asks if Green Lantern would have any information on it but GL, Hawkgirl, and Martian Manhunter have nearly reached Thanagar Prime to gain the secrets to unlocking the Totality. Batman has been trying to learn more about Starman, but Luthor has erased half of his mind. What he does know is that there are connections from the past that they need to dig up.

Arthur recognizes the mark of Arion on the ship. Arion was Atlantis’ first hero, back before it sunk into the sea. With Poseidon’s help, he built a cosmic conch that could call sea life from other planets. He made the call and was answered by Divine Beings as well as Invaders. Diana finds a weak spot on the ship and Arthur breaks it open to find the key to the Graveyard of Gods. It’s a trident (or an octdent…it’s got a lot of points). Suddenly, they are attacked by a giant space kraken. It is made of a purple liquid which is the ocean water of its home planet. It strikes Firestorm and turns him into an acolyte. It picks up the ship with Arthur and Diana with it, swallowing them whole.

Arthur wakes up shirtless and covered in illuminating tattoos. He is surrounded by strange sea creatures. Three of them stand before him. They tell him they are the Sea Gods of other worlds, answering the call of the beacon just as they had years ago when Arion did the same – asking them to form a union. Arthur grows excited. By reforming the union, they could reclaim the waters; protecting the Earth before while the League focuses on the Totality and repairing the Source Wall. Captian Gall (one of the Gods) grabs Arthur by the throat, “We are the Invaders.” They leave Arthur trapped in the Blood Reef, and drown the world in their purple waters, turning the world into acolytes of their cause. They are here to reclaim what’s theirs.

Analysis: Scott Snyder does a lot of setup this issue. Not that it’s a bad thing, that’s just what was happening here, and understandably so. Arthur is going to be our catalyst for this arc and I look forward to that. I haven’t read a lot of Aquaman comics, but I like what little I have read. Diana is also going to be heavily utilized in this story, as it seems it was Poseidon who was killed an issue or two ago.

By the way, Poseidon looked a lot different since the last time I saw him… Must have gone on a diet…

The absurdity this book dishes out is amazing. I absolutely love how bonkers-crazy this thing gets. It’s like the Justice League animated cartoon turned up to eleven. The idea of exploring the sea gods of other worlds is interesting to me. It makes sense that if our world has them, others would too. Snyder continues to do an excellent job pacing out his stories. And although I wouldn’t say that his characters’ voices are perfect, they are much better this go round. Also, Jarro cracked me up. Francis Manapul’s art is just gorgeous. I hated that last time I read one of his books, the art just wasn’t up to par. He completely redeems himself here. And to make it even sweeter, he even colors his own work. If you haven’t experienced Manapul artwork in full before, you are in for a treat. I don’t know anyone who colors like Manapul. The best way I can describe it is neon-pastel. It’s bright and vibrant, but not quite realistic. It gives it a surreal look that’s so beautiful and full of color that you can’t take your eyes off of it. He layers colors. When he uses bright reds, there’s a bit of orange underneath to make it pop. I love it – Manapul is the best. Tom Napolitano letters here, and does a solid job. Letter placement, font, and pacing were all excellent here.

Final Thoughts: This issue had an interesting setup that has yet to be determined how it will flush out (pun very much intended). With the most beautiful art you’ll find on shelves, I highly recommend you check this one out.