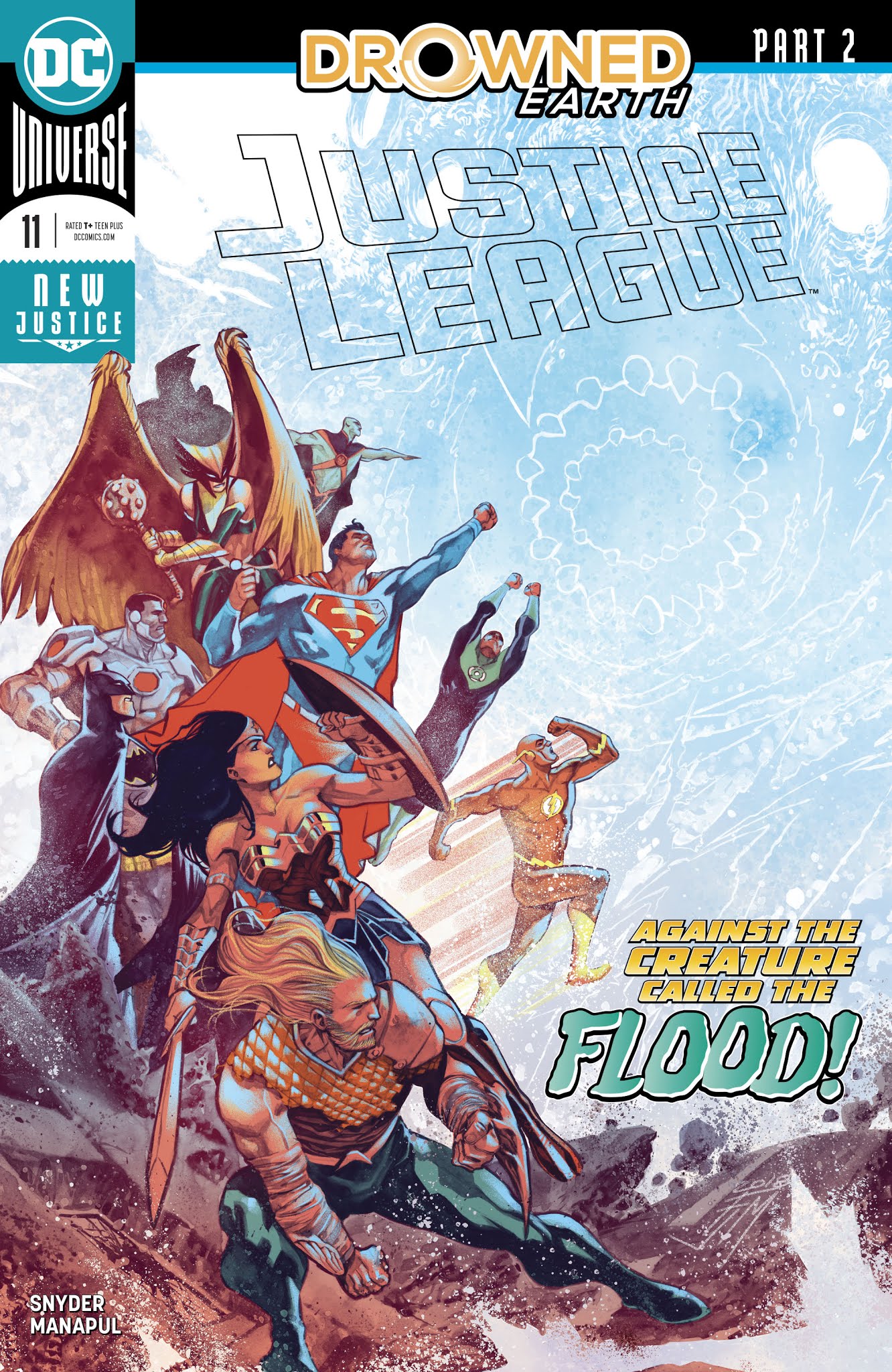 Overview: Aquaman loses his powers and then dies? And Black Manta floods the other parts of the Earth they forgot to get to in the last issue.

Synopsis (spoilers ahead): Mera’s father takes her to the reef’s edge to show her Atlantis and wonders. He believes, as king, that it is important to see things how they could be instead of how they are. Mera doesn’t see that. She just feels anger.

Batman (still in his exoskeleton) has Jarro in hand. He’s inside the submerged Hall of Justice. The building will hold for a little longer, but they are running out of time. Flash finally comes through on the coms, but not with great news. The rest of the League is with him, but they have turned and are currently chasing him. He’s been infected too, but he’s holding it off thanks to the Speed Force. He also has Superman with him. He’s pushing him through the water while he rides his cape like an inner-tube. Clark smacks an infected Atom away when a giant Octo-Swamp Thing appears, and I guess the other infected League members assume he’s got this and they just leave? Mera appears and cuts Swamp Thing’s tentacles off, and then he just gives up too, not wanting any part of that. Mera has a piece of Arion’s crown. It should lead them to the Tear of Extinction. She opens a portal, and they walk through it.

Back at the Blood Reef, the Triumvirate is forcing a de-powered Arthur to walk the plank into the Charybdo Vortex – it’s like a black hole. Arthur gives it one last fight and does so valiantly until he is thrown off. However, Wonder Woman comes through on her ship. Arthur sees that she has the key to the Graveyard of Gods, and they use it to both escape the alien sea gods, as well as convince Poseidon to give Arthur back his powers. Diana uses the key and the two vanish from the Blood Reef along with their vessel.

Meanwhile, in the Atacama Desert – the driest place on Earth – (I honestly don’t know if this is a fictional place or not. I’ve never heard of it.), Superman, Flash, and Mera step through their portal. The actual burial place of Arion is located here. Superman and Flash are able to locate it and they make their way down. They find the tomb, but someone else has beaten them to it… Black Manta. He has the Tear of Extinction and tells Commander Drawl to drown them. Purple waters clash into the desert and begin flooding the tomb.

Arthur, Diana, and her new two-headed metal bird, Asteria find themselves in the realm of the Graveyard of Gods. Before them stands a massive shrine with water pouring out of it. They finally come to find Poseidon. He tells them that thanks to Cheetah’s claws, he is trapped in here. Arthur begs the god to bless him with the powers to combat the Invaders, and Poseidon responds by skewering him on his trident.

Still, inside the Hall of Justice, Batman continues to guard the Totality with Jarro at his side. He sees that the defenses have been breached, only to find that the Legion of Doom has made their way inside.

Analysis: I’ve been sitting here, trying to figure out my thoughts on the current state of the Justice League title. I’m gonna be honest with you, I’m struggling with it. Is it fun? Yeah. I guess so. Is it good? Not really. Don’t get me wrong, it’s not bad. It just lacks many ingredients that make for great storytelling.

Who’s story are we following? I thought it was Lex Luthor. Yes, he’s the antagonist, but I felt that was a great way to drive the narrative. Here, in the second arc, we seemed to have abandoned that.

What’s the story about? Well, this seems to remain consistent. God(s) either doesn’t care or hates us, and deep down, we reflect that. This seems to have been a theme Snyder had been playing at since Metal. I’m sure this is something he plans on expounding on and possibly even doing a turn on as we get further into the story, but right now it makes for a depressing discussion when you deconstruct the story.

And for our third question; what’s at stake? The fate of the world? Well no, not really. We are in the team’s second mission, and so far we are two for two on destroying the world. And by story arc’s end, we’ll probably be two for two on completely repairing it. We could be playing out a neat allegory to Noah, something that could have a deeper meaning with consequences. But instead, it comes across as nothing more than disaster-porn. At this point in the story, I’m supposed to be on the edge of my seat; we are approaching the conclusion; we are at the climax of the story. But I watch the entire Earth submerged into the water with billions of people’s lives seemingly lost, yet I feel nothing.

Francis Manapul’s art is as beautiful as ever. His lifework, his storytelling, his colors; the guy is just amazing. I’ve never seen someone be so good at every aspect of comic book art the way he is. The only thing that felt off to me was the pacing, and I’m not entirely sure it was his fault. The pacing felt off through the script. Tom Napolitano letters here and does a fine job. He generally keeps things pretty simple here, and I appreciate that. He does have a little fun with Jarro, but Jarro is just a fun character. The placement throughout is excellent.

Final Thoughts: I find myself losing interest in this comic. Consistent problems in the script are making me feel apathetic about the whole thing. Manapul’s art is gorgeous, though, and it gives me something pretty to look at.