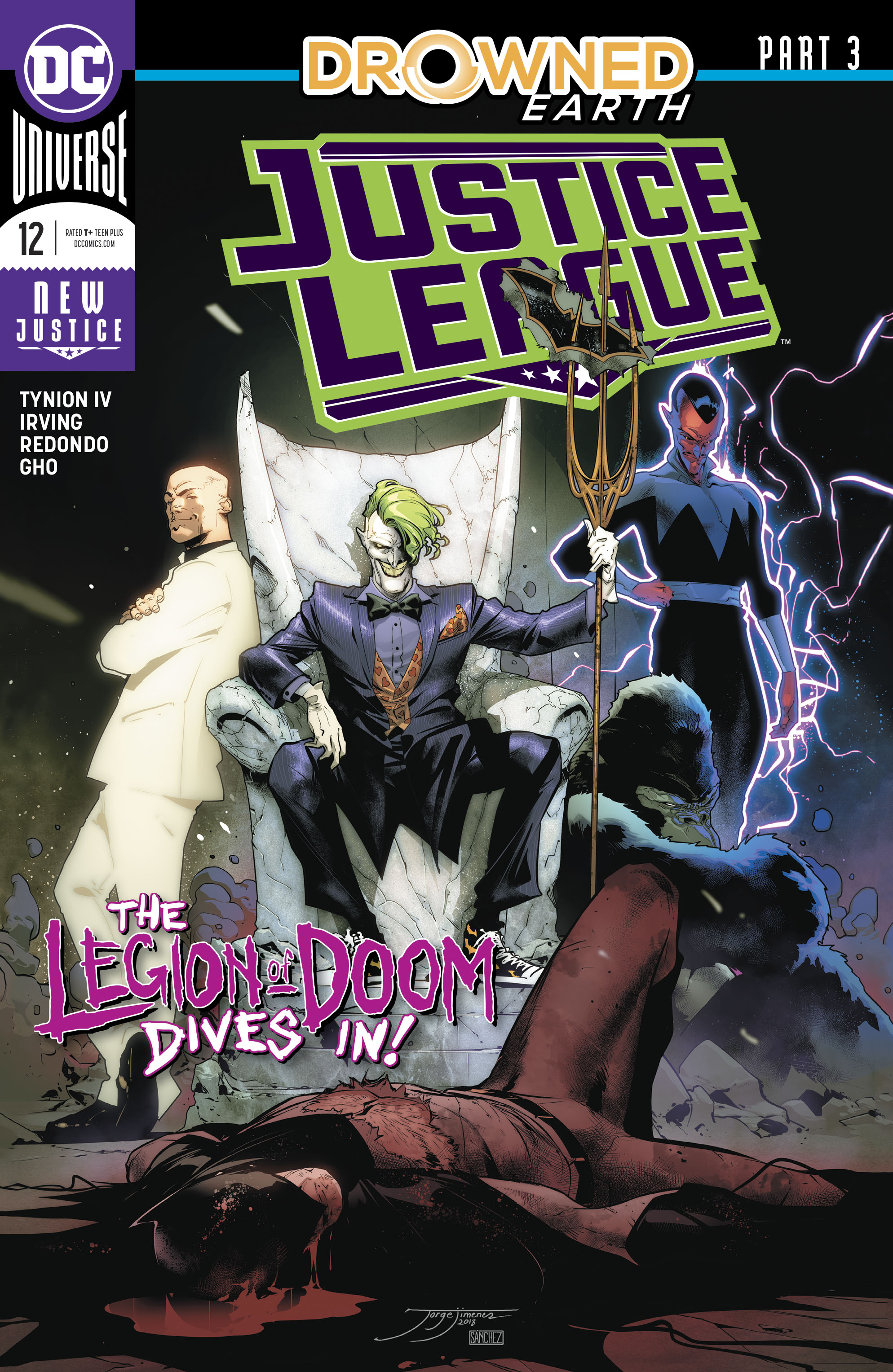 Overview: While the League gains the upper hand against the Triumvirate, the Legion of Doom make off with the Totality.

Synopsis (spoilers ahead): We open with a flashback. A young David Hyde is on a fishing boat in the Gulf of Mexico with his father during a storm. His father is trying to claim a wreckage before it is out of their jurisdiction. David thinks; all the ocean ever does is take. Why can’t they just take it back?

Now, that’s exactly what he’s doing. He sends his minions to attack Superman, Flash, and Mera. They hold their own, and Mera protects them from the corrupting influence of the purple waters.

Back in D.C., at the Hall of Justice, the Legion of Doom has found the Totality. To open it, they must break a relic, the key to the Graveyard of Gods. Cheetah hates the thought of this, but if it means destroying the Graveyard, and therefore, killing Diana, then she’ll do what must be done. Joker, Sinestro, and Grodd search for Batman in the trophy room. He’s somehow found his way into Lex Luthor’s old mech-suit, quips, and begins fighting the three.

In the Graveyard of Gods, Diana rightfully lashes out at Poseidon for stabbing Arthur through the middle with his trident. He explains that he wasn’t trying to hurt him, of course, he was trying to enhance his powers. But now he realizes that Arthur doesn’t have his powers. Manta has them now, instead. He explains that the Triumvirate didn’t originally come here with bad intentions. They were struggling to get life to flourish on their worlds. Poseidon had that power and offered it to Arion. Arion wanted to share that with others. The Triumvirate answered his call. Poseidon had read this story before. He knows well how the gods act. They will clearly try to usurp him. So, he poisoned Arion’s mind, telling him that they are destroyers who need to be killed before they kill them. Arion was meant to be a champion of life, and instead became one of death, creating the Tear of Extinction and banishing the Triumvirate into the Graveyard of Gods. Arion was sacrificed in doing so.

Back at the Hall of Justice, Luthor destroys the key by using the doorknob. Batman enters with Joker in his hand and threateningly tells him to drop the doorknob. Or he crushes Joker? Regardless, Lex doesn’t flinch. He uses the doorknob to teleport the Legion of Doom out of there, along with the Totality.

Back at Arion’s tomb, Mera finds traces of the Tear of Extinction inside Arion’s bones. She extracts enough to form a water blade out of it and attacks Drall with it.

The Graveyard of Gods is now crumbling. Poseidon feels himself going mad in here. With the Triumvirate being trapped here for so long, he understands their wrath. Arthur and Diana rush to their boat. Poseidon gives Arthur his trident. He tells him to fuel its power with the Tear of Extinction. He tells him to save his world. Poseidon uses the last of his power to send the boat out of the Graveyard, and back to Earth.

The Triumvirate watch from the Blood Reef. Their enemies now hold the power of life and death in their hands. They stand no chance. Manta hypes them up and calls for them to release the Death Kraken.

Analysis: James Tynion IV handles the script here, and I enjoy that he carries over the trend of showing a flashback from a member of the Legion of Doom. Getting a glimpse into what makes them tick humanizes them. Cheetah compromising her values for the greater goal shows just how deep her hatred for Diana runs. Batman’s part was kinda strange to me. I’m not sure how he managed to slither his way into Lex’s old suit, and he continues to have weird quips. I thought Poseidon’s backstory with Arion was classical Greek mythology, although his idea to power up Arthur was…interesting. I like how Mera has been a major player in this and has gained the upper hand on the Triumvirate. Although, I don’t like how the three alien gods have tucked tail as soon as things turn slightly out of their favor. Manta is the backbone of the group, giving them a pep talk seemed out of character for the gods. The pacing seemed a bit off to me. I’m not sure what it was exactly, but it just felt off. A little all over the place, kind of like my mind right now.

Bruno Redondo’s style is very clean. I actually enjoyed his more straightforward approach more than his splash page. His cadence and storytelling were very well done. Frazier Irving’s pages were very unique. I do enjoy Irving’s style, but his constant use of floating heads is strange. Had it been Poseidon’s floating head I could have chalked it up to weird god powers, but that wasn’t the case. His art is very moody, and it worked well in the Graveyard of Gods scenes. However, when we switched back to Arion’s tomb, I felt lost. The tonal shift was jarring. I would have preferred the pages be more carefully assigned out, or completely done by one artist. Sunny Gho colors Redondo’s sections. To me, The most impressive part was the flashback in the opening pages. There’s a sepia tone, immediately establishing a shift in time. Sunny also does a great job with lighting throughout. Tom Napolitano letters here, and does a fine job. His placement is on point and his font choice was consistent throughout.

Final Thoughts: Still an underwhelming arc so far, but the overarching story is still extremely interesting to me. I look forward to the next chapter in this series.