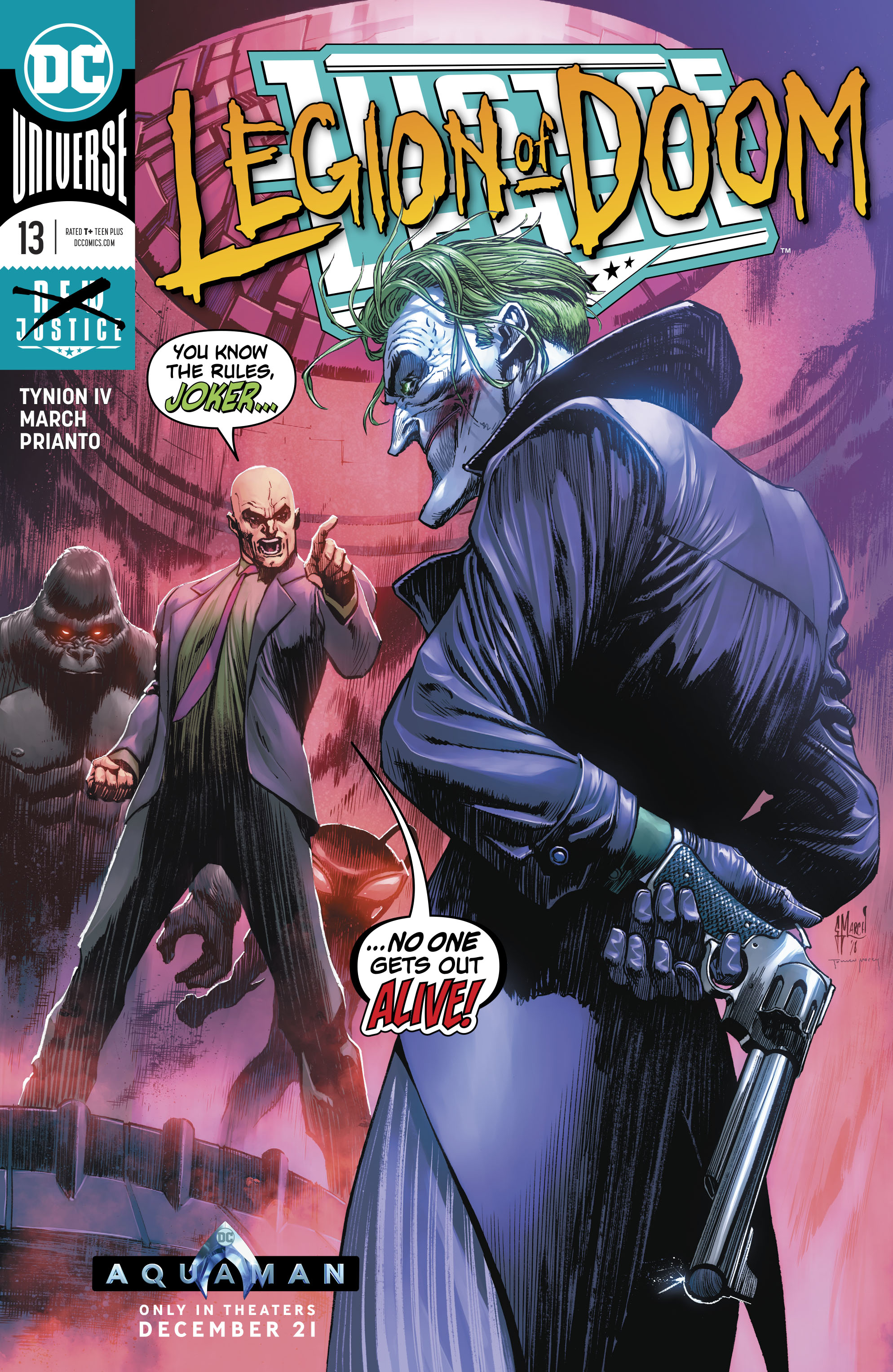 Overview: The Legion Doom is down a few members, so the supervillain community shows up to turn in their resumés. Nothing’s going to go wrong, right?!

Synopsis (spoilers ahead): Before; the Joker plans another attack on Gotham City, using hot air balloons and a toxic gas – Jack Nicholson style. The man he kidnapped to build all this for him begs, asking for Joker to allow him to call his family so they will be safe. Joker tells him that he will call them himself, and shoots the man in the chest multiple times.

Joker makes his way into his makeshift warehouse office to find Luthor sitting in his chair. Lex commends him on his plan and his efforts to get to the Bat, but what a waste. Joker attempts to stab Luthor, but Lex is no dummy. He brought protection in the form of his force field. Luthor tells him to stop playing games and speed this process up. They both know Batman will be here in minutes. Luthor tells him of the power he can grant him. Just imagine the kind of things he could do to the universe. Luthor has seen the future. He knows mankind’s true nature. It follows that of entropy, like the Joker. Joker agrees to join under one condition. The One Who Laughs cannot join. Lex laughs at the thought of bringing that lunatic on-board and agrees.

Currently, Lex is in his lab, trying to set Perpetua free from the Totality while he recalled the deal he made with the Batman Who Laughs just issues ago, going back on the promise he made to Joker. However, it’s recruitment day at the Legion of Doom! They are looking to fill the spot vacated by Black Manta. Riddler, Mr. Freeze, Solomon Grundy, Scarecrow, and other DC Universe villains all show up for the spot, when they find a gift left for each one of them; Joker’s gas toxin.

Everyone begins fighting each other, now infected with Joker toxin. Luthor goes to get his power suit for self-defense, but Joker has already destroyed it. Luthor quickly jury-rigs the gauntlet so he can use it. He fights his way until he comes to Joker’s torcher room. He narrowly survives until Joker reveals that he’s found his magic doorknob and knocks him out with it.

When Luthor comes to, he is chained to the center of the room. Joker explains that he was always going to ruin the Legion of Doom’s plans in the end. Cause chaos – it’s kinda his thing. He was going to kill them all. And time it perfectly so that Batman and Superman would catch the end. But now he realizes that’s nothing compared to what the Batman Who Laughs is going to do to him. He leaves the doorknob and walks out of the room. He presses a button on his way out and a gas fills the room.

Everyone comes to. It was an anti-toxin. The recruits leave, not wanting to join. With only four members now, Cheetah feels like they’ll become a laughing stock. Luthor tells her they have everyone they need. Knowing human kind pulled toward Doom, he believed Joker to be an advanced form of human. The next evolutionary stage. But with the Totality, they are winning. He calls in Dr. Ivo and tells him to bring Brainiac back online.

Analysis: This was a mixed bag for me. James Tynion IV does a fine job getting the team where he needs them to go. But there were some Deus ex machina moments where Joker did the thing because of course he already knew about it. Batman is typically used in this fashion and I don’t like it then either. I do like the motivations of the characters. Joker is mad at Lex for lying to him and plots to destroy the whole team because of course, you don’t bring Joker onto a team! Joker abandoning the team because he knows the Batman Who Laughs will do worse is even a bit creepy and unsettling. Well done on that front. I liked hearing Luthor’s thoughts on Joker, connecting him to the people he saw from the future was a nice touch.

I know Guillem March was talked about a lot on the Comic Cast back when the New 52 started, but I was just getting into comics then and missed out on that. I’m sorry, but I’m not sad about that. I do not like his style. He puts WAY too many lines on people’s faces, giving them massive wrinkles, making everyone good awful ugly. Lots of things were just strangely shaped. Seeing this made me wonder if March has ever seen a doorknob in his life. It resembled more a giant cookie, which would drastically change the course of this story. He’s known for over-sexualizing female characters, but his only chance to do that here is with Cheetah. Now, he may have added a bit more flair to her, but she actually has the most interesting design here. I liked how angular her face is. However, throughout much of the comic, his perspective is severely distorted. It’s like looking at a scene with a bubbled lens, which I always hate the look of. He does so some interesting things with the panels, though. In fact one in particular with the Joker was in the shape of the letter J. He was also very detailed with his backgrounds. Lots of Easter eggs and gags throughout, especially in Joker’s office.

Arif Prianto colors here and does a fine job. I’ve never seen his work before, and I’d like to see more from him. He did play around a lot with texture and lighting. The first page with the balloon was my favorite. If had a lot of variety and colors bouncing all over the place, but I thought he handled it very well. Tom Napolitano letters here and continues to put up consistently fine work.

Final Thoughts: It feels a bit too convenient at times, but it’s nice to have issues like this that are complete in the issue itself. I really like dropping in on the Legion of Doom from time to time.