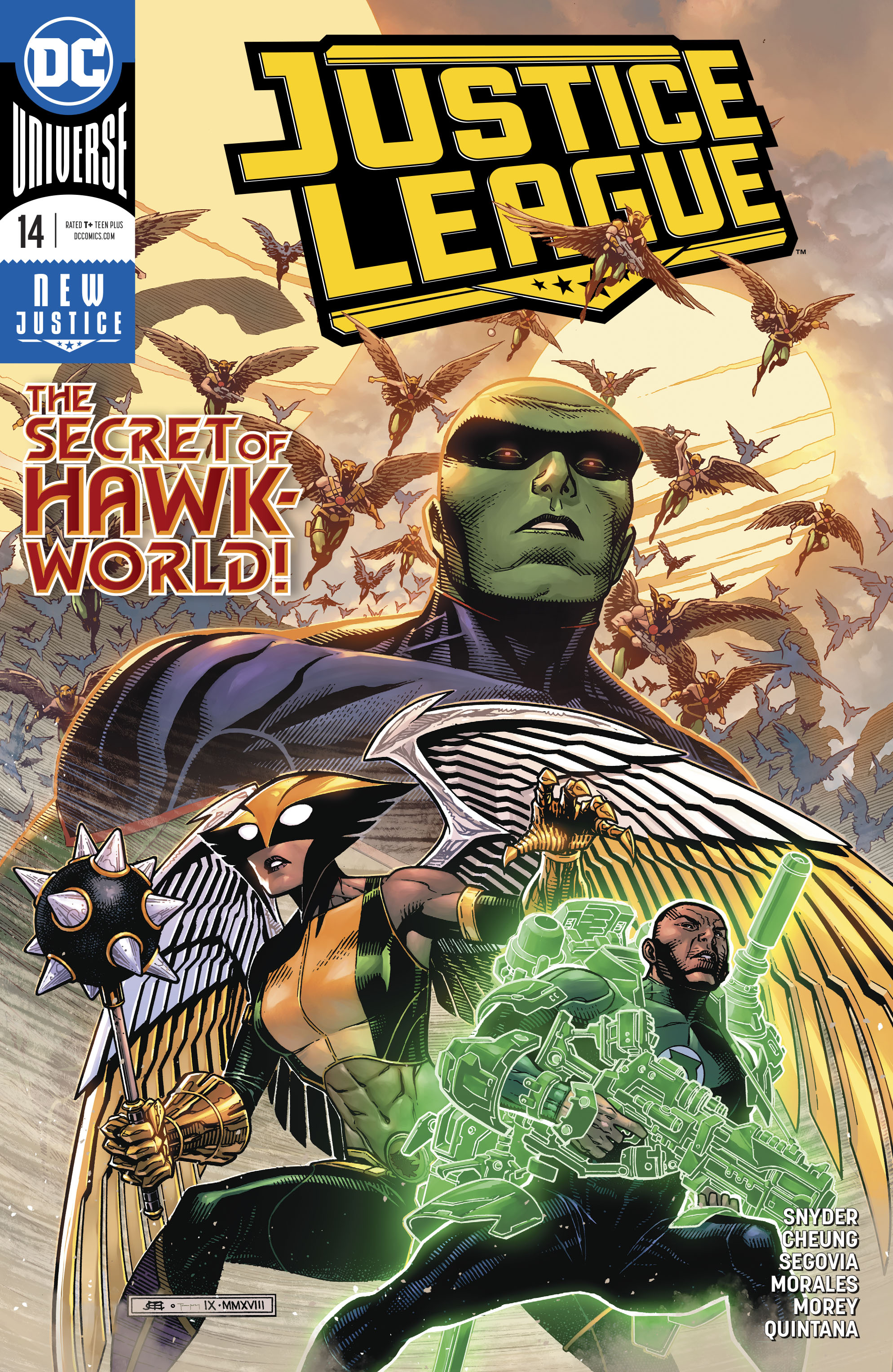 Overview: Things aren’t going so hot on Thanagar Prime, but Earth is heating up just fine.

Synopsis (spoilers ahead): Martian Manhunter, Green Lantern, and Hawkgirl make their way to Thanagar Prime. They are stopped by Thanagarian soldiers, who are set on not letting anyone into their vault; which was kinda funny because no one mentioned the vault. I don’t think any of them knew it existed. These guys just showed up and announced that they weren’t allowed in their secret room — whatever. They are saved from a throwdown with the soldiers by the planet’s Empress – Shayera Hol.

Remember how J’onn came here looking for answers from the Martian Keep? Yeah, she died the other day. Sorry, J’onn. You are now the last Green Martian in the universe. Via a peace treaty with the Guardians, she asks John Stewart to remove his ring, but he can’t as it’s kind of attached. Kendra asks Shayera if she can read the map that emits from her wings when they glow…sorry. She can’t read it. BUT – good news – there’s a party tonight and they are welcome to come. John admires the architecture. Kendra senses that something is off on this world.

Kendra and J’onn talk during the party. J’onn is depressed over his new situation. Shayera shows up and speaks to Kendra. They share some sort of connection, but they aren’t sure how or why. They just feel like they should be the same person. Shayera wonders if they are each a piece of something bigger. Kendra mentions that she can tell Shayera was lying about her wings. Shayera tells her that it’s not a star map – it’s something much bigger. She touches Kendra and Kendra sees something that frightens her. She flies off in a hurry, speaking to Green Lantern and Martian Manhunter through the mind link. The Martian Keep is alive and she’s being held captive in the secret vault at the planet’s core, but they forget to speak that last part in their heads and voice it out loud instead. Shayera sends her guards after them, and they pin down our heroes instantly. They are also being led by Karter Hol – Hawkman. Shayera orders him to kill Kendra.

Batman has Starman in a hospital bed, Jarro on his face. He’s sending information telepathically to Batman, giving him answers. Batman nearly faints, blood running down his nose (Eleven-style). Superman and Wonder Woman rush in. Superman pulls Jarro off Starman’s face, “he could have killed you!” Diana warns Batman, telling him he risked his life. Superman also points out that the unstable energy inside Payton could tear a hole in the universe. Suddenly, his power levels triple, and Superman tells them they need to evacuate the Earth because he’s going to explode. (Wouldn’t it be easier to evacuate the exploding man?)

Analysis: Scott Snyder and James Tynion IV handle the script here. Tynion seems to shoulder more of the responsibilities this issue. There are interesting things set up here, but many are set up for the sake of happening. Shayera backstabs the JL, which seems counterproductive to me. Those guards immediately giving away their secret room made me laugh (and not in a good way). Kendra and Shayera feeling like they may be two halves of the same person is interesting to me. And then Batman accidentally triggers the human bomb. I know he’s getting desperate, but that is very reckless on his part. And then Superman solution is to evacuate the people from Earth instead of the actual bomb. Alright Superman, this is not your brightest moment.

Jim Cheung, Mark Morales, and Tomeu Morey do a handful of pages in the opening, and then the final page. I like their work. Cheung has a style that reminds me of Romita Jr., but it’s more polished and refined, making it more pleasant to look at. Morales’ inks are very deliberate, making each mark count. His linework adds character to the pages that breathes life into the characters. Morey’s colors have the variance that you’d want with so many characters, but he has a softness that makes it pleasant to look at on the eyes.

Stephen Segovia and Will Quintana do a fine job throughout most of the comic. Segovia inks his own pencils here and does a solid job. His perspective is great. I’d suggest cleaning up some of his facial work – sometimes they’d look a bit stiff, but he did a great job varying those expressions. It looks like he’s well on his way of cleaning that aspect of his work up. Quintana has a much brighter vibrancy to his colors, which played nicely on a foreign planet. His skin tones looked a little off to me. Like they had too much variance to their tone. I’d suggest reigning that in next time around. He does a great job with reflective surfaces as well as color balance. Tom Napolitano letters this and keeps things flowing nicely with his consistency. I like the little squiggle they give J’onn’s bubbles. It adds a little flair to his voice in my head.

Final Thoughts: Nice setup here, but very little happens to progress the plot. After my disappointment with Drowned Earth, I was hoping for a bit more with this arc. Hopefully, the next issue delivers.