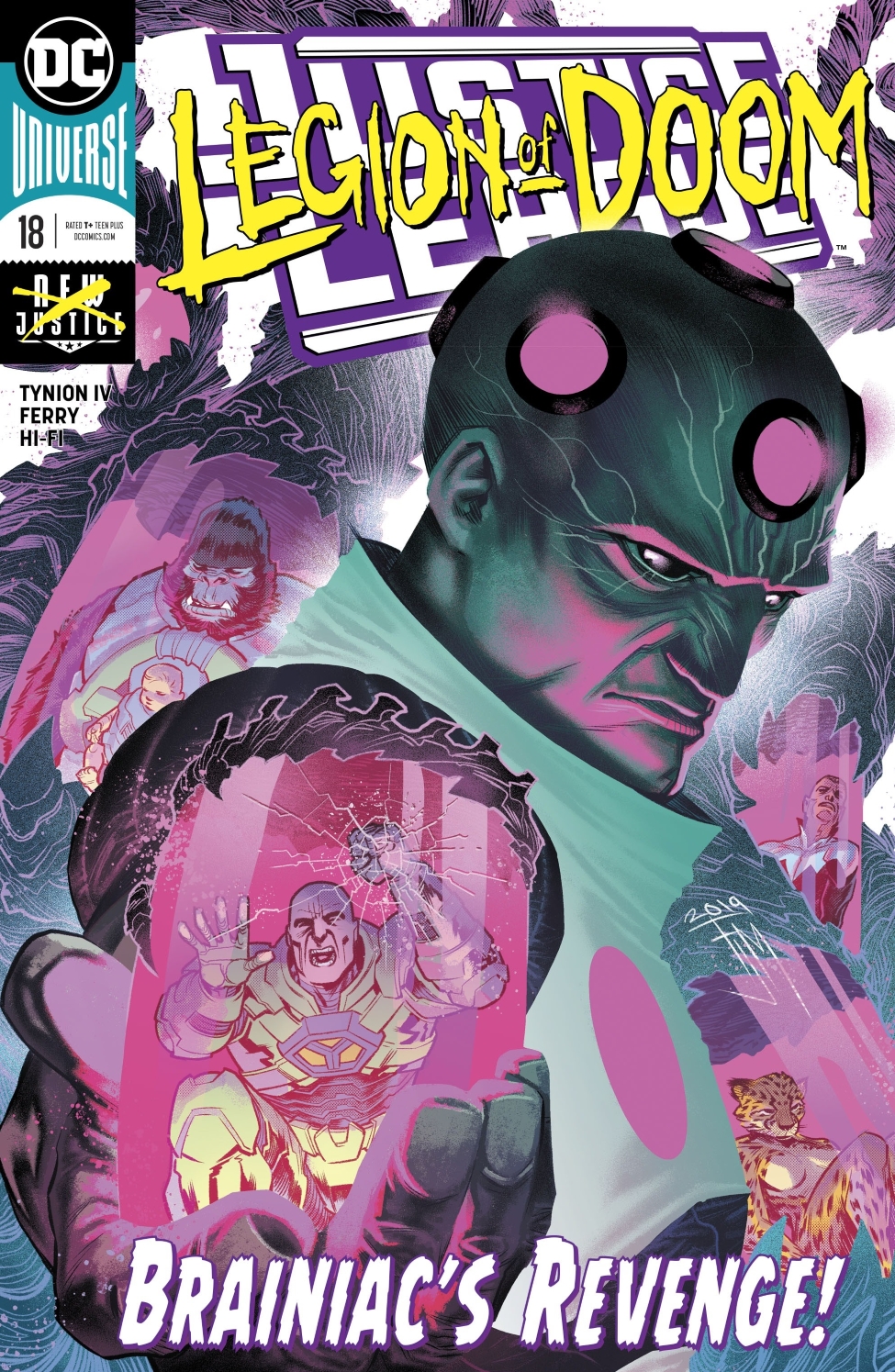 Overview: Lex Luthor and Brainiac have a monologue-off.

Synopsis (spoilers ahead): Lex Luthor straps himself down to a machine and mind-links with Brainiac. Brainiac takes this opportunity to monologue to Lex all about the plan he’s about to carry out. He’s going to upload his mind into Lex’s and control the Legion from there. Then he’s going to wake Perpetua, and then he’s going to kill the Legion of Doom for some reason. Lex then asks if it’s okay if he can monologue now. I mean, it’s only fair.

So, 46,000 years ago– Vandal Savage searched the Himalayas to find a fragment of the Totality. He found some of the greatest minds to help him trace where it landed and once he found the piece of metal, he killed them.

He traveled the globe, letting others study it, but never getting the full picture themselves. He found when the Totality would strike Earth, and learned that the universe would bend towards Doom once Perpetua came. He found another great mind to help him on this journey – Lionel Luthor. He uncovered many secrets that the Justice League have rediscovered and many others they haven’t yet. The decision Lex made when he was eight years old changed the course of his life. He had a plan to shed a layer of Earth’s crust, so that the Totality would miss Earth. Lionel realizes that Vandal can’t see what the power of the metal could do for mankind because he only believes in himself. When Lex set J’onn free, Vandal wiped Lionel’s mind in his anger, leaving him a mediocre man with a mediocre life.

Lex is warning Brainiac that he is like Savage. He has all the knowledge, but he doesn’t have faith. And if he keeps on this path, Luthor will make sure he shares the same fate as Savage. He shows himself beating Savage to death with the artifact that robbed him off a better life – a doorknob he spent an eternity trying to understand, but failed to do so. Brainiac may not have that faith, but Lex does. Faith and sacrifice – that is what is required. Lex can help Brainiac have faith. Also, if he does try to take over his body, he’ll be infected with a virus that will leave him comatose.

The two come out of the mind-link in tact. They use their combined skills to unlock the power of the doorknob, turn it, and open the door to the sixth dimension.

Analysis: James Tynion IV, Pasqual Ferry, Hi-Fi, and Tom Napolitano all work together to make this comic, and I have mixed feelings on it.

The story is mostly a history lesson taking place inside a monologue. Now look, I’m not claiming to be the smartest guy around, but I think I’m pretty smart. I had so much trouble understanding why exactly things are happening here. Why are Lex and Brainiac mind-linking – I don’t know? Now that doesn’t seem like a big deal, but that is the setting for this entire issue.

I must be honest, the intro was hard for me to get into. Those first five pages were hard to read. Everything after that was excellent. We get history lessons, dots connecting, and even some emotionally heavy material. It also creates a bit of a canon problem – Lex wouldn’t have known what Vandal did to his family when he killed him, however, he acts as though it was a symbolic act on his part. I love it and wish we could have built up to that too feel the emotional weight we feel here. But thinking back on it, it doesn’t add up. Also, we get more of the unseen one-upmanship that always irritates me. It’s like how you would have done battle against your cousins when you were playing as kids – “But I brought my laser sword with me.” “But what you didn’t know, is I brought my laser cannon.” No?… You didn’t do that?… It was just me then.

As for the art, I don’t really have much to say positively about the art. I didn’t like it. The perspective is mostly on point, but there was a time or two where it was just a tiny bit off. Everyone’s eyes are huge. It makes it look like they came out of a Disney CGI animated movie. The inks are bad. They are inconsistent and they also lack depth. They are laid on too thick in some areas, too little in others, and sometimes not at all. It was a very strange choice that just makes the comic look unfinished. The colors aren’t helping it either. Not only are the choices in color bright, but they also clash on nearly every page. Colors are important to balance the page, lead your eye, and establish a tone. The colors don’t do any of that here. The Francis Manapul cover is gorgeous, which makes the interior art all the more disappointing.

Final Thoughts: There are some good moments to take away from this issue. The story takes a while to get going, but it is also a bit of a mess, and it’s not pretty to look at either.