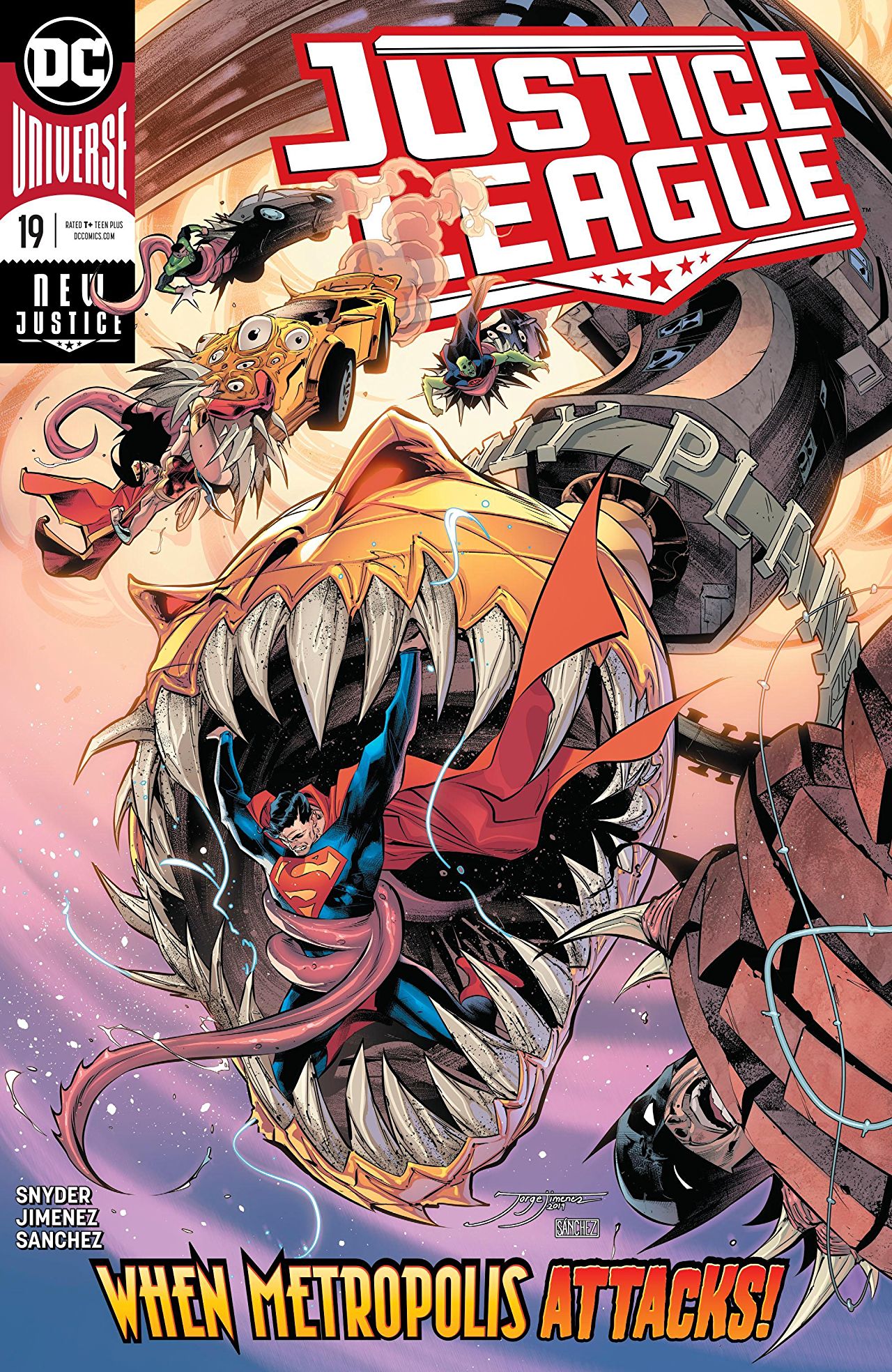 Overview: The adventure of the world’s greatest heroes continues to peddle in place as Mr. Mxyzptlk talks nonstop.

Synopsis (spoilers ahead): For those looking for a spoiler-free review, just know this. The comic is twenty pages long, and thirteen of them are pointless. One plot point gets dropped on the reader and it may or may not even be true. The dialogue contains exposition, more exposition, and Batman’s sass filling the cracks.

The issue starts with a narration monologuing about Superman’s worries, without saying anything about why exactly he’s worrying. We don’t learn what exactly Superman is specifically worried about. His worries don’t play into what happens in the events of the issue, or if they do, they are so nebulous that I couldn’t see them at play.

Afterward, he gets a message from Batman to go hang out with them, where they reveal that this issue they will be capturing Mr. Mxyzptlk. This is then followed by three solid pages of nothing but an acid trip involving the Imp’s powers wreaking havoc over Metropolis before it’s revealed that it was all a hallucination thanks to Martian Manhunter’s influencing Mr. Mxyzptlk. This then follows up with a cutaway to the Hall of Doom where the villains just sit around plotting their evil plots. Followed by four pages (two of which are a double splash page) of Mr. Mxyzptlk delivering exposition to the Justice League about how the multiverse is structured.

This all culminates with Mr. Mxyzptlk opening a door to the supposed sixth dimension, which apparently only Superman can survive in, only to reveal that its all a trap and Superman is trapped in a sunless void and the rest of the Justice League has been taken to the sixth dimension by a shiny older Superman where they meet older versions of themselves.

Analysis: The Justice League: The union of the world’s greatest superheroes working together to solve a problem so great that none of them could solve it all on their own. Being asked to take over the responsibility of reviewing such a comic should feel like an honor to a comic fan, like being invited to eat a meal Gordon Ramsey himself cooked. Instead, I feel like I have been tricked into going to eat at McDonald’s and being served a plate covered in pickles and mayonnaise.

If you decided to jump in now, nineteen issues into the middle of this story, then don’t worry, because nothing of note has happened, and anything worth talking about has been exposited to you in this issue anyway. The story, if one can call it that, involves the Justice League trying to stop the inevitable collapse of the universe after breaking the Source Wall way back in Justice League Annual #1. A plot point they have been beating into our heads with every issue, because they must remind all their readers that this even happened. It’s not like this is a real problem that’s impacted the DC Universe. For a story supposedly acting as a crossover adventure for the best of DC’s lineup, nothing seems to spill over in any direction.

Now, I’m not saying every Justice League comic needs to be an event comic, shaping the way the world works. But the plot of this series literally reads like the premise of an event. The very foundation of the universe is breaking apart. In one of the earliest issues, we saw Killer Croc turn into Godzilla. We know this is a major event that is leaking out into the rest of the world. So why does nothing feel like it’s actually being impacted?

So, to recap, the heroes sit around letting an Imp ramble on only to reveal that the information was all a lie and Superman is now trapped and alone. Great. I’m sure we needed to spend money to get twenty pages telling us this.

Now, this normally wouldn’t be a problem, except we just had two issues full of exposition back to back preceding this. Not to mention, at least in #18, the exposition was supplemented with Lex Luthor and Brainiac interacting with one another, establishing a relationship between the two that would be built upon in later issues. I highly doubt Mr. Mxyzptlk will be a major player in this story, and yet seven pages of this issue exist only to tell us about his character. An entire page is dedicated to a lie pretending to retcon Mr. Mxyzptlk’s entire purpose. We only get one or two funny lines between our characters, most of which are given by or about Batman. Starman continues to exist, despite doing nothing to contribute to the story. In fact, Starman’s nonexistence is so apparent in the story, one of his only lines in the comic is him talking about how he’s still pointless.

Now, I’m not saying everything in a story must be plot relevant. If all we needed was plot-relevant information, then this story would be fine due to how much exposition we got. But a story isn’t just plot. It’s the characters who make the plot go. Our cast is quite large, consisting of the Justice League and the Legion of Doom, but no one establishes any character. If you are going to have a bunch of people sitting around a table talking, use this to do two or more things. Any good writer will tell you that dialogue serving a single purpose is wasted potential. People behave so monotonously that you could just have a single character talking to themselves and you’d get the same emotional reaction.

Final Thoughts: If you are still reading this story, stop. Don’t bother buying this comic. Let your wallet speak for you and tell DC you demand more eloquent writing.