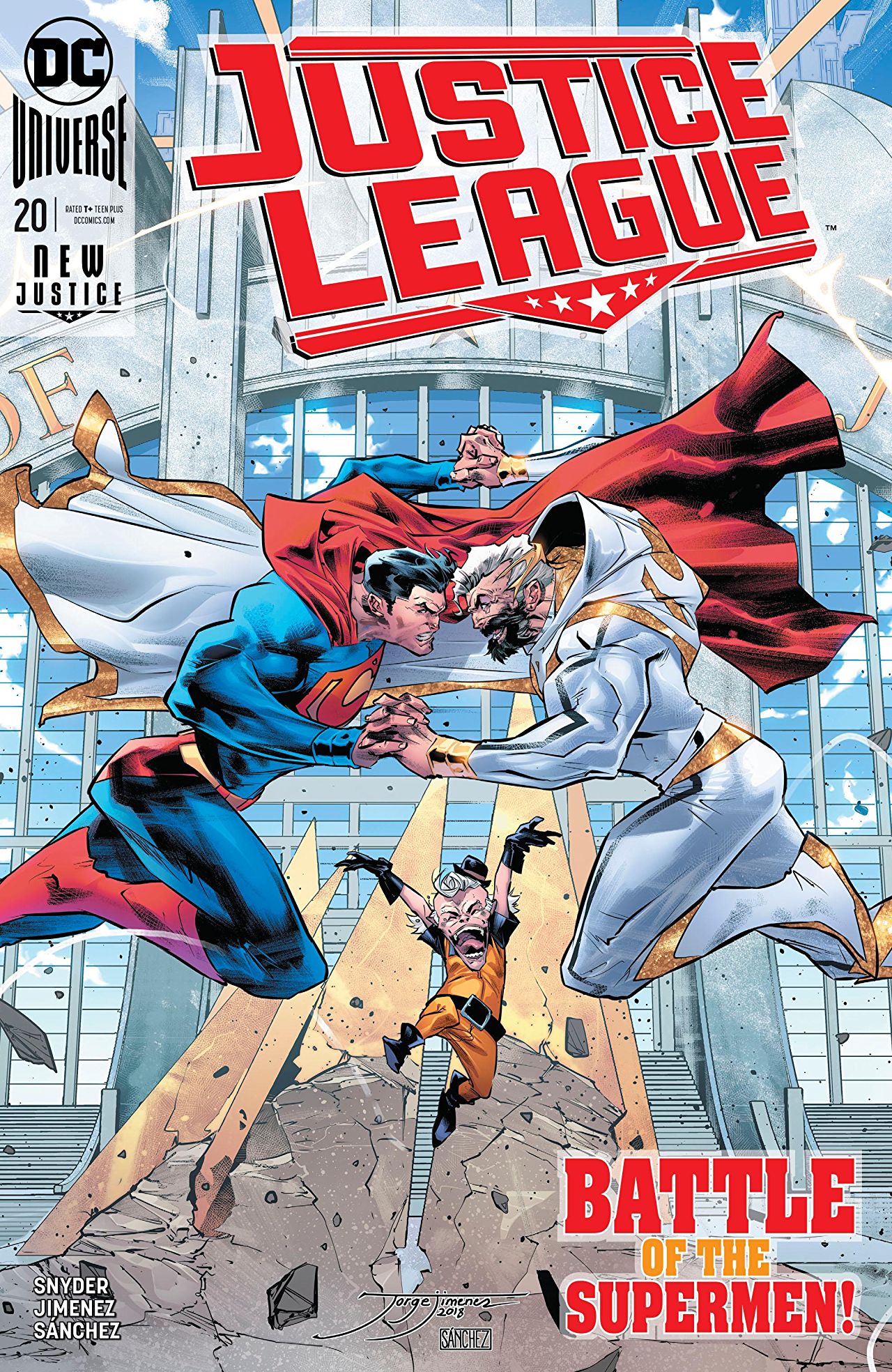 Synopsis (spoilers ahead): Think of a line in the sand or any line. Once you cross that line, you’ve made a choice. Things are forever changed. You can’t go back. That’s how we open, as the Justice League crosses the line of their dimension and enters the sixth dimension and the House of Justice. It’s much different than our Earth’s Hall of Justice. As they gaze at a banner of the shape of a “Full Justice formation” as J’onn puts it, the sixth dimension’s Superman explains that it’s also honoring their multiverse and their hard-fought victory. J’onn senses no defenses or shields.

Bruce wants to get to business right away as he and Diana want to make plans to go to war with the impending doom. The sixth dimension’s Batman, Superman,  and Wonder Woman say they’ll explain the seriousness of the matter as Lantern (sixth version) says that the broken multiverse is hurdling thru void of the destroyed source wall. Superman (sixth) says the only way to avert the situation is to speed up the multiverse instead of trying to stop it. He goes on to explain that Lex is reviving Perpetua who had been imprisoned in the source wall and the need to stop her plan of using the multiverse as a weapon of doom.

Bruce asks how to do it and Superman (sixth) is caught off guard as he says that it’s an odd question coming from Bruce, as “he’s the one”, but stops short of finishing his thought. He then tells our Justice League that plans can wait and to go explore the sixth dimension, as it’s a place where “dreams come true”.

We then change scenes to a see Batman chasing Deathstroke across a rooftop and as he’s getting away, Batman calls for Robin’s assistance. Jarro in a Robin suit apprehends Deathstroke and makes a joke as Batman calls Jarro his favorite Robin ever.

At the Earth’s Hall of Justice, Mera wakes Jarro from his dream and she and Starman ask Jarro to read Mxyzptlyk’s mind, because he’s inside some sort of energy field and Starman is getting some scary readings.  Jarro says there’s a voice in Mxyzptlyk’s head telling him that he must do what was agreed upon. And that he must “erase the line before it’s too late.”

We then visit some of Earth’s JL members as they are exploring the sixth dimension. J’onn and Kendra find that Blackhawk Island is a sprawling space hub. J’onn senses a togetherness, no conflict. The sixth dimension Kendra and J’onn explain that together with our dimension’s Kendra and J’onn they become bonded in their quest for answers. J’onn will eventually guide and lead while Kendra will advise J’onn on how much to reveal and to whom. They also say that their future child, Shayne, is “hyperempathic” and that it can be “too much” for him in times of high emotion.

We switch to a Star Labs where the Flash (sixth) and Lantern are showing Barry and John that they’re actually rebuilding and expanding their multiverse by using the speed and still force to collapse hypertime without repercussions. And that they can create things of “wonder”.

We then see a bright, thriving Gotham as the Batman (sixth) and Superman thanks Bruce, as the Batman (sixth) reveals himself as Dick Grayson and tells Bruce that Bruce sacrificed his own life to win the war. Superman (6th) tells Bruce that because of his acts, no child will ever have the same experience hat Bruce did. Bruce, being skeptical as always, asks where all the villains are.

Back on our Earth, Lex chides Brainiac to use his imagination and that while a fifth-dimensional imp has no limits to his power, to imagine what the Legion of Doom could do with their “own” imp.

We then see the real Superman trying over fifty times to fly on the same axis/line and failing each time. As he falls deeper into despair he finally comes face to face with Superman (sixth) saying that Clark’s life was all ever on one line leading to their meeting. Will he ever cross the line?

Analysis: “Our thoughts strayed constantly, without boundary” from the song High Hopes by Pink Floyd. These lyrics came to mind immediately after reading this issue. You’ve got the Justice League, the Legion of Doom, threats to not only earth but the multiverse as well as other dimensional travel. It brought feelings of joy,  and wonder, and “what if”? It made me feel like I was a kid again, eating my Cheerios and watching the Super Friends on Saturday mornings with my brother.

In our world of short attention spans, Snyder, Tynion, and Jimenez have had a slow burn on JL for the better part of a year leading to and continuing in this arc.

Snyder has me asking myself who, what, where, when and why?? Who is telling Mxyzptlk to erase the line? – I’d assume Lex, but maybe not. What is the purpose of the sixth dimension JL? – If there are no villains, no need for shields and defenses, why are they around?  If the sixth dimension JL are just honorary members or ambassadors, Batman could at least lose the trench coat/cape deal.  It is a fabulous costume though. Where is Superman as he repeatedly tries to fly on the same axis?  – Trapped in some other dimension perhaps?

When does Dick cease being Ric?  If this sixth dimension is in fact real, then Nightwing fans can rest easy knowing that sometime in the next decade, Ric regains his memories.  Somewhat of a joke, but if JL is paving the way to the Year of the Villain then I’m considering this book current continuity, and it’s a valid question. Why does Superman try over fifty times to fly the same line/axis?  Why doesn’t he try something different? Or is his destined to fly that line?  – I honestly have no idea.

Snyder shows some humor with Jarro’s dream and some true surprises with Dick Grayson revealing himself as Batman of the sixth dimension.

The art is absolutely outstanding. A simple panel of feet crossing a line sets up the whole issue.  Jimenez also does a fantastic job with facial expressions. Barry’s face is one of joy as they enter the House of Justice. Jimenez’s cover is a masterpiece too. You’ll need to get a three cover trifecta for the whole picture though. I wouldn’t pay $12 for three issues of the same book with different covers, but I’d gladly pay $20+ for a 16×20 of this cover. (Are you listening DC??) Too bad DC just made these the covers for #19-21. Sanchez’s colors and use of light add an extra depth of the space and sky scenes.

Final Thoughts: This issue leaves me wanting more. I’m anxious to find out what happens next. There’s a ton of questions.  Hopefully, they’ll get answered as me move along. As Lex said, “use your imagination”. Let your thoughts stray without boundary. Let yourself be a kid again!! I truly believe that this whole run, minus the slight detour of Drowned Earth, is worthy of being a “Crisis” level event for DC.