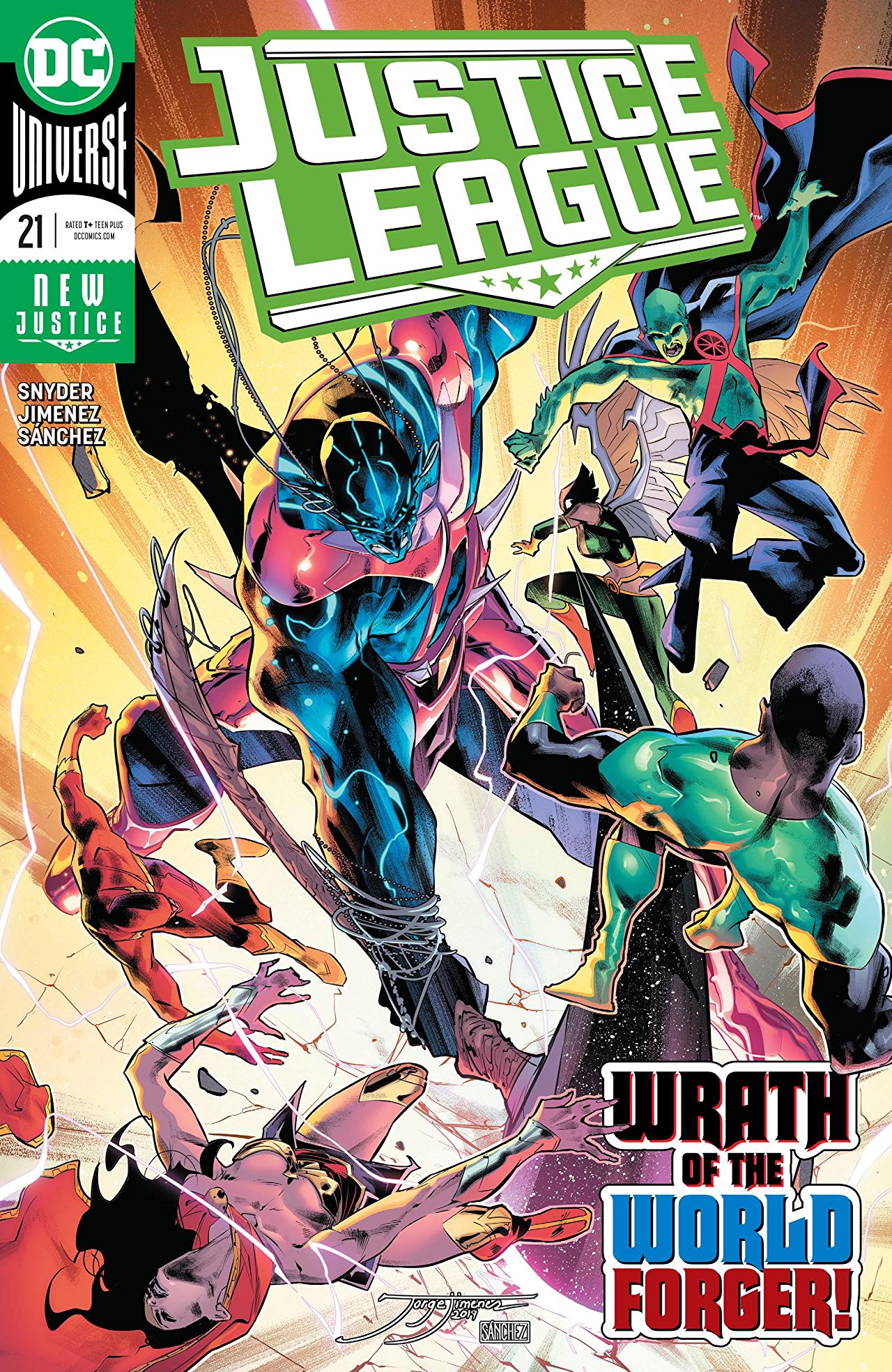 Overview: The Justice League is faced with an ultimatum, and suffer the consequences of their choice in the sixth dimension.

In future Gotham, Bruce and Dick are enjoying tea and chatting about peace and the Bat-Family, when Bruce is suddenly called to the psychic board room by J’onn.  There, Shayne says that if they don’t leave or side with their captor, that they’ll surely be destroyed.

The (sixth) Superman then reveals himself to the League as the World Forger and says that this multiverse that he created is their only hope, and that his multiverse must replace the League’s multiverse.

On earth, Mxyzptlk has taken a new form and Jarro says that instead of imagining things into reality, that Mxyzptlk is un-imagining them.  Thus, erasing them.

In the sixth dimension, the World Forger tells the JL that they have to decide to save only the good, or no one.  Diana says that saving only the good is not the path of Justice. They, vote and are immediately transported to the fire pits of Apokolips of the sixth dimension to be imprisoned by Lois Lane.  She tells the League that she destroyed Superman, and that they will never escape.

Analysis: This issue seamlessly continues from the last issue. We get some of the answers we were looking for, as well as showing new parts of the sixth dimension that leave us asking more questions.

Superman’s steadfast belief that he is right, has left him alone to die in the pocket universe.  Will he be escape, or be saved?

The too good to be true sixth dimension proved exactly that, but not before Bruce and Dick have some very human, touching moments about Alfred and the Bat-Family.  I really like that Snyder uses conversation to add depth to show Bruce’s feelings.

Jarro again provides some truly funny one liners.  While some people think Jarro is a bit, or a gag, I like him a lot.  Some humor while the multiverse is at stake provides a perfect pause. Sort of an interlude of sorts.

Instead of jumping to the next thing, Snyder does some great world or dimension building with the prison on Apokolips.  The sheer size of it, and the fact that it’ll imprison everyone who doesn’t side with the World Forger is impressive.

So we’re at a bit of a crossroads at the mid point of this arc I think.  The League believes there is no justice in saving just the good, and this choice lands them in prison run by (sixth) Lois Lane. How will they escape, and how will they stop the World Forger from destroying our multiverse? How are Lex Luthor and the Legion of Doom going to factor in this?  Will they save the JL, or will Starman, Jarro, and Mera? Or will they save themselves?

The art steals the show in this issue.  The page where Mxyzptlk is un-imagining things is like nothing I’ve ever seen in a comic.  It needs to to be seen to be believed. Jimenez, and Sanchez are top tier art/colors in the industry.  I also really like the panel where the (sixth) Superman lands on the table of the boardroom. The costume design, and the flow of the cape are great!

Final Thoughts: A solid, solid issue that answers previous questions while also moving the story forward.  The art is spectacular, and the story telling is top notch as well.