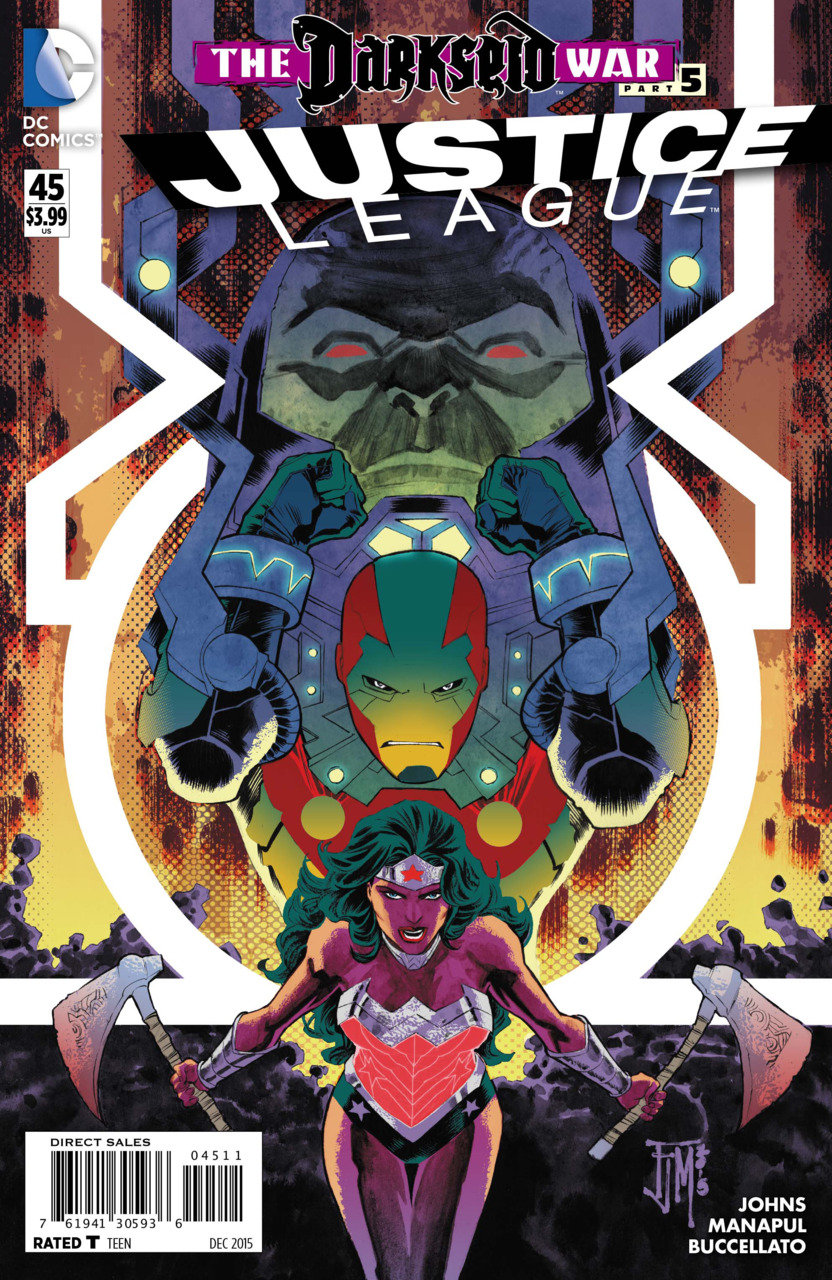 Darkseid is dead. The huge ending to the last issue is obviously being felt throughout the universe. While Wonder Woman’s internal monologue centers on humanity questioning the mortality of gods, the Justice League stands over the body of Darkseid wondering how it happened and why the Anti-Monitor disappeared after the battle.

Flash, now merged with the Black Racer, asks if he was responsible. Mister Miracle explains that it was the Black Racer and what his role was as Darkseid’s greatest weapon. He adds that any host merged with the Racer must stay fused with him until death. Flash cuts him off and states that he does not want to escape death, but wants to control it.

On Apokolips, Superman tells Luthor that he has enough power to return to Earth but will not be taking Lex with him. Superman, New God of Strength, then gives us a nice Charlie Sheen moment (“winning”) and warns Luthor to never come back to Earth or he will kill him.

Batman, now the New God of Knowledge, and Green Lantern are still on Qward when they learn that Darkseid is dead. Batman states that with Darkseid dead, the threat is over and he can get “back to what’s important” (meaning Gotham).  Before boom-tubing away, Batman tells Green Lantern he should return to Oa to stop the imminent invasion from energy-seeking parademons.

Returning once again to Apokolips, Luthor is captured by The Forgotten People who tell him there is a prophecy of a human who will come to save Apokolips. Luthor replies that he is this human, although the description of this “hero” matches Superman more than him.

Back on Earth, Flash is discussing with the League that death is not evil and that it comes to them all at some point. The team believes the Black Racer is the one really talking and it seems to be confirmed with interjecting cries from Flash for the Racer to get out of his head. Flash appears to regain control eventually because he runs away from the League.

Just as Flash leaves, Shazam begins writhing in pain as numerous voices begin speaking in his head. He then becomes the New God of Gods. He takes flight and also leaves the League. Just as they are about to pursue Flash and Shazam, the rest of the League is left to deal with the last remnants of Darkseid’s army.

The ending of this issue shows the Forgotten People hooking Luthor up to a device which will transfer the Omega Effect, now returning to Apokolips after Darkseid’s death, into Lex. Their leader, Ardora, tells Lex that if he is the hero he claims to be and is worthy enough, he will live. The Omega Effect arrives and transforms Lex Luthor into the New God of Apokolips.

Well, just when I thought this series could not continue packing each issue with game-changing moments, it goes ahead and transforms a handful of League members into New Gods. With the death of Darkseid, I find it very interesting that all these New Gods are created. The issue had a few minor problems but it was pretty exciting to see some of our heroes transcend into literal godhood.

Although I do enjoy Manapul’s art in general and in this issue, Fabok’s artwork has helped make this series have some truly amazing moments that the writing could not do alone. So I will say I wish Fabok could be on every issue.

All that being said, Manapul still gave us a good issue. Manapul’s penciling and texturing does deliver a gritty tone that matches the aftermath of such a major event like Darkseid’s death. I did especially like his handling of Flash, now God of Death, and his creepy scene discussing death. His character design of Luthor as the new God of Apokolips was also a plus.

The only other “problem” I had with the issue was Batman’s sudden proclamation that the threat was over. Green Lantern sums it up nicely with telling him the old Batman would still be skeptical and while Batman may be different now, he is still the God of Knowledge. This does not seem like a move the God of Knowledge would make. But like I said, a minor detail that I am sure will be fleshed out in future issues.

Johns gives us some cool moments throughout this issue. Starting with the monologue of Wonder Woman, Johns has been utilizing her really well as a set up for these issues and helping to create suspense. Having her state that new gods are born out of a god’s death builds excitement for the issue. Despite not being happy with Bat-God’s way of thinking, I like the new personalities of the new gods, especially Flash, so I’m definitely looking forward to seeing Johns develop these new gods further in future issues.