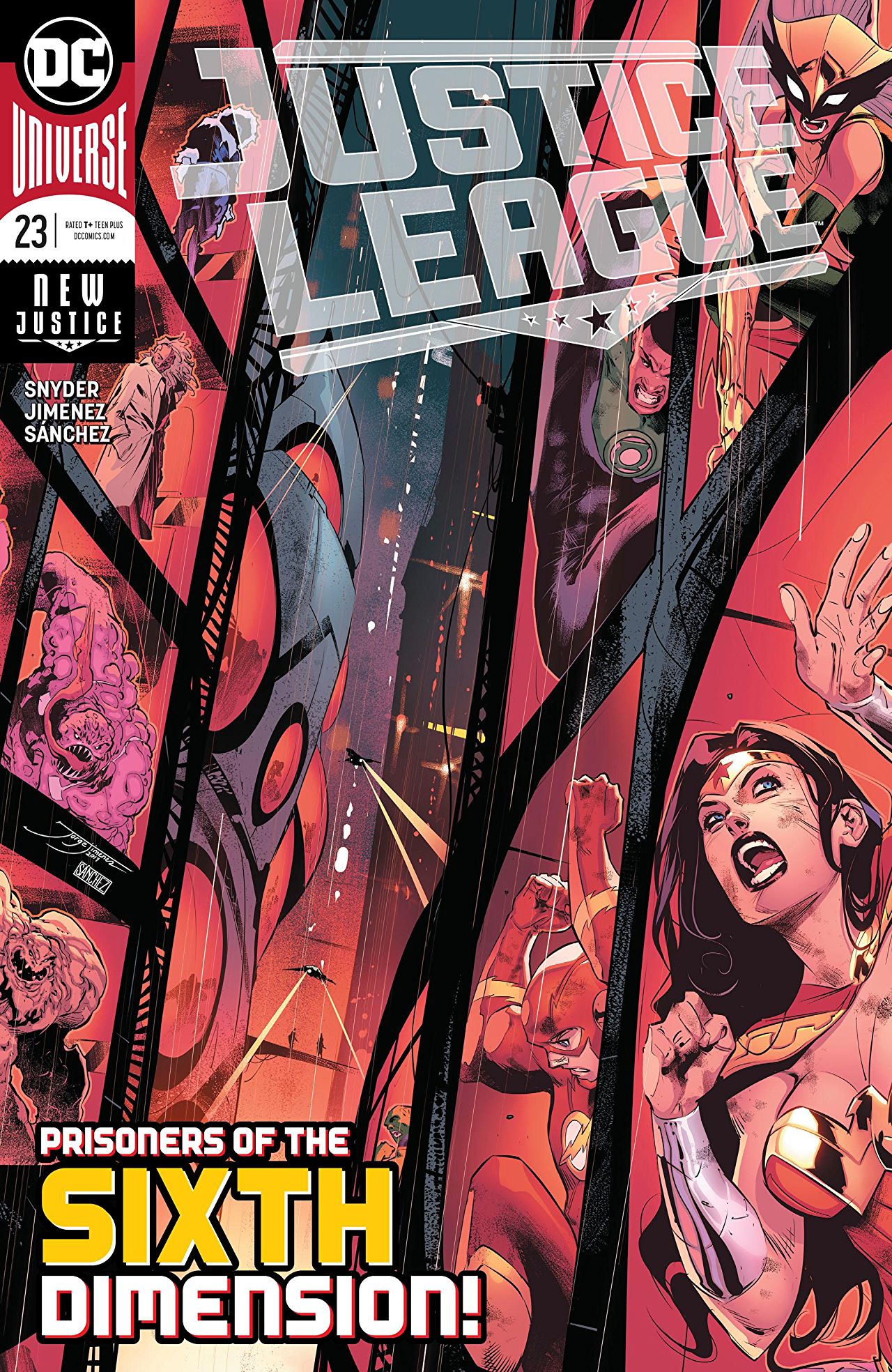 Overview: As the League is rescued from future Apokolips, Batman seemingly holds Superman’s fate in his hands.

Editor’s Note: This week also saw the release of DC’s Year of the Villain, which featured two stories that focused on events that are currently playing out in Justice League. So what better place to share what happened than right before the latest issue of Justice League?

Synopsis (spoilers ahead): DC’s Year of the Villain Chapter One–Brainiac pulls info from Amanda Waller while in the Oval Office. Lex fires all his Lex Corp employees and tells them to leave the building before he kills them. Lex tells Brainiac that he a plan greater than any previous plan, and that all other villains will fall in line, and that his plan starts today.  Lex then blows himself up.

DC’s Year of the Villain Chapter Three-After the League has returned from the sixth dimension, the void of the source wall is pulling the fringes of the universe into itself. The League fight to save civilizations, and while doing so Superman saves a lone ship flying off course intent on killing billions out of fear. The team learns from the ship’s captain that Perpetua’s minion is Lex and that he’ll have a big plan including recruiting other villains. Batman says to put out the call to all former League members. On Earth, Perpetua breaks free as Lex is being reformed after he killed himself.

Justice League #23-In a flashback, we see Clark teaching his son Jon about traditions. Jon is trying to make fire with sticks in remembrance of those that lost their lives from Smallville in the Great War. Clark says that traditions link through time.

In a Pocket Galaxy, Superman has lost track of time and doesn’t know if he’s been gone for minutes or decades. He remembers his day with Jon, and that he himself is a tradition, and finally breaks free of the planet as it shatters behind him.

On the sixth dimension future Apokolips, the Justice League, minus Batman, are restrained and shocked with a taser by the sixth dimension Jimmy Olsen. Lois tells her captives that she’s watched countless universes die, but it’s because of Clark that they always lose. She’s grown tired of watching her son die.

Batman has stayed behind to hear out the World Forger.  The World Forger tells him that he creates worlds that may last, and if they’re unstable he returns them to the forge. His goal is to replace the universe that Mxyzptlk is unimagining, with the one he’s creating. However, he also believes the only chance to fool the cosmic judges and achieve a justice formation is for Batman to move the suns sustaining Superman, thus killing him, and the World Forger taking Clark’s energy and becoming the future Superman.

Back on future Apokolips, the rest of the League are being held in a cell, and are contemplating if they should compromise and join the World Forger to save what they can, despite it costing millions of lives. Shayne sneaks into the cell and J’onn tells him to focus his anger into creating a physic blast that frees them. While his blast frees the team, it also opens other doors freeing many villains that have been imprisoned for many years. The League flees the villains toward a launchpad and are rescued by a ship with an older Legion of Doom inside with Darkseid piloting the ship. Darkseid sets course to return them to the World Forger.

Batman makes his decision to move the suns away from Clark and says goodbye.

Analysis: We’re back with the JL after a one issue Legion of Doom break. Opening with a flashback to Jon and Clark is a great plot device to establish tradition, and the latter focusing on tradition is what finally breaks Superman free from his pocket galaxy. It works very well, and seeing Clark and Jon together in a Justice League book brought a smile to my face.

We get some further explanation from Lois as to her reasons for siding with the World Forger, although she is being an idealist. She realizes what she’s doing is wrong, I think, but can’t bear seeing her son die more times than she can count.

There is one page of Mxyzptlk and Batmite fighting, and I’ll admit I was looking very closely for Jarro. He’s not in this issue, and I was a bit disappointed. He added some much-needed levity to this universe altering story.

Having a sixth dimension Jimmy Olsen obviously makes sense, but this version is the very different than his regular DC version.  He seems much bigger and taller to me.

When Shayne uses his physic blast to free the team but also the villains, I was happy to see the Reverse Flash. He’s one of my favorites.

The two biggest surprises of the issue were having the Legion of Doom and Darkseid pick up the League, and obviously Batman seemingly pushing the button to move the suns away from Superman. And as a result, he would die. I have a couple of issues with both of these surprises though. First, in issue #22 the Legion of Doom shows up to save our earth, which is fine, but now all of a sudden they’re in the sixth dimension. How did they get there? Mxy and Batmite are still battling on earth, so this is confusing to me because at this point earth hasn’t been saved yet. Secondly, if all it takes is the push of a button to move the suns away from Superman, why doesn’t the World Forger just do it himself?

I think this whole arc is about choices, and weighing options, and deciding how strong your beliefs in something are. Do the ends justify the means? And how far will our heroes stray from their moral compasses to achieve what they believe is right?  Can you achieve justice by also letting millions die?

The art and coloring by Jimenez and Sanchez continue to be at the A+ level. I particularly liked the rain effects on Apokolips.

Final Thoughts: While there are a few confusing details, it is another solid issue. Justice League remains one of the best books put out by DC.