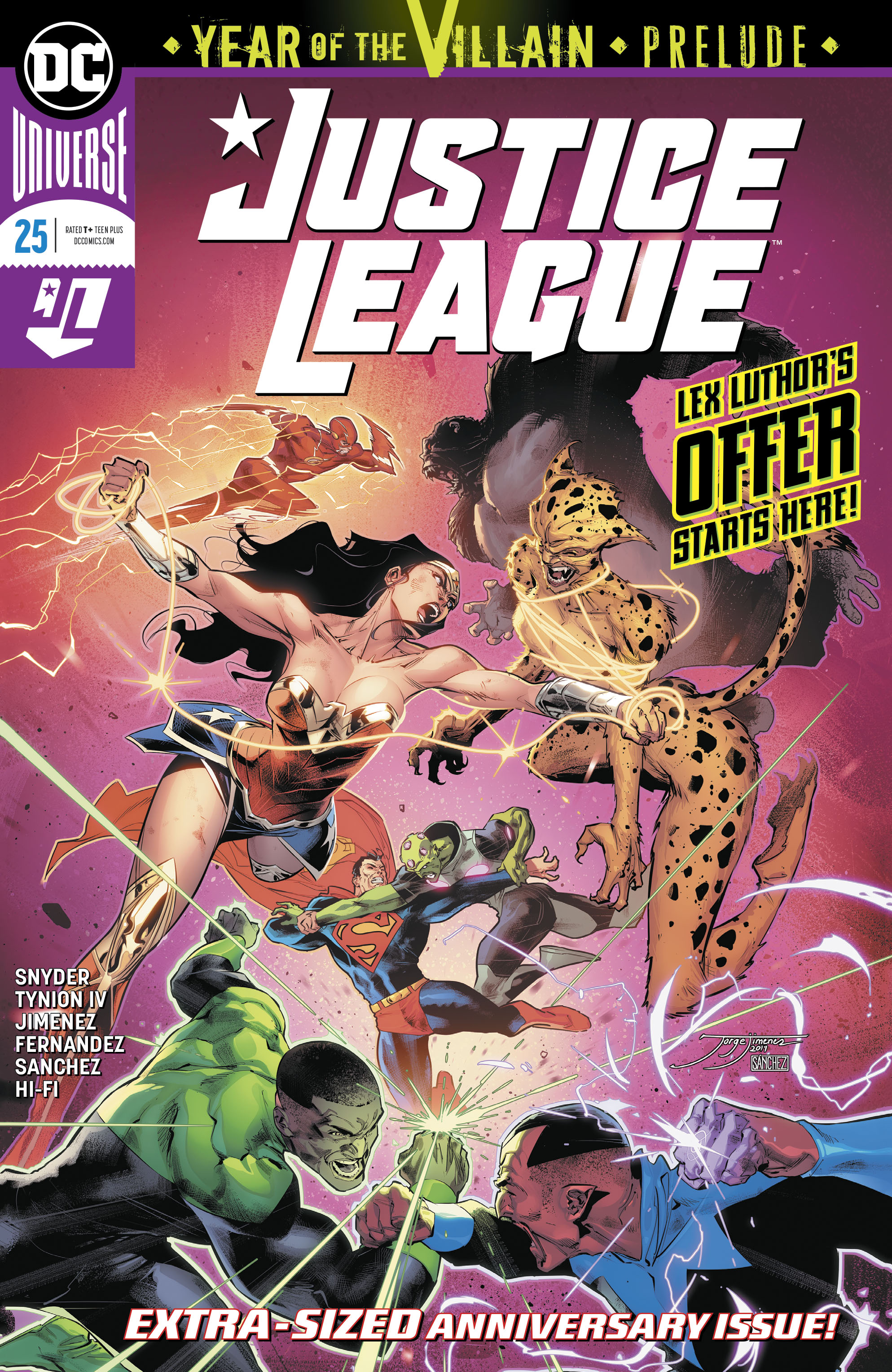 Overview: As the two Justice Leagues battle in the sixth dimension, Superman continues his fight to survive. Back on Earth, the Legion of Doom put their plan into motion.

Synopsis (spoilers ahead): We begin the issue with a flashback of Clark and his earth dad, Jonathan. Clark wants to use his heat vision to light a lantern, but his dad wants him to try to do it as the cavemen did. Clark doesn’t have any success.

In the Dark Sector, as Superman continues to try and break through to rejoin his friends, he remembers those moments of failure, and to not let go and to push forward and find his way back. As he pushes forward, he sees his multiple failed attempts, and Lois with his dead son, Jon. His body begins to fail and he becomes gaunt.

At the sixth dimension’s Hall of Justice, the two Justice Leagues battle each other. Batman asks the World Forger for one last chance to try and convince his friends to change their hearts. World Forger agrees to let Batman try, but says he’ll rip their minds apart himself if he fails.

Batman releases drones that electrically trap the Justice League. He then begins to plead to the League, but also to Clark, to look past themselves, and that he has found the only way forward and wants them to see “it”.

Superman’s body continues to fade, but he opens his eyes and sees lights.

Word Forger again tells Batman to reshape the Justice Leaguers minds, or he’ll do it himself.

Flashback to the memory of Clark with Jon, as the Justice League surprises Jon with lanterns lit when he can’t get his lit because of the rain.

Back in the Dark Sector, Superman sees that the lights are in fact suns, and feels them recharge his cells. He feels stronger and flies faster than he ever has. He speeds towards the World Forger and his approach can be felt throughout every dimension. World Forger calls Captain Lane and tells her to shoot down whatever is coming from the Dark Sector. Lois, with tears in her eyes, realizes it’s Clark but orders to fire. As World Forger is about to strike the anvil, Superman sees his friends and remembers the lessons they taught him. He then punches World Forger so hard that a chunk of the sixth dimensions earth big enough to be seen from space is broken away.

The story then moves into part two of the issue with “The Message”. All of the Justice League, including the newest member, and Shayne, who survived the destruction of the World Forger’s multiverse only because of his belief in our earth’s Justice League, have returned to the Hall of Justice on Earth. They notice how the Hall of Justice is empty as they are greeted by Mera, Jarro, and Starman. Mera tells the League that they’ve been gone for a week, not hours. Mera goes on to say that the whole world saw them losing their fight to Mxyzptlk, but that the Legion of Doom showed up and won the fight with the help of Bat-Mite. Lex Luthor saved the world. However, Mera then says that the whole world saw a message from Lex claiming that a result of the Justice League breaking the source wall is that hundreds of worlds are being destroyed, the multiverse is dying and it’s the Justice League’s fault. Lex goes on to say that the universe must be saved at any cost, and that they must all become villains to do so, and that people must reject the Justice League and save themselves. Lex says he will dissolve Lexcorp and give away his fortune, patents, and weapons to people that’ll make better use of them.

We then have a recap of events from DC’s Year of the Villain #1, where the Legion of Doom robs Amanda Waller’s mind of the locations of all the villains and how Lex destroyed the Lexcorp building with himself inside as a sacrifice.

Back at the Hall of Justice, J’onn says the impact on Earth as a result of their actions is very bad, which Jarro confirms by swearing and then being scolded by Batman for his language. J’onn says people are scared and have lost trust, and now they want to be villains.

Batman says that they need to be proactive in finding the villains. World Forger says this is what Perpetua needs to for her final transformation to power – a world of evil. Finding his brothers Anti-Monitor and Monitor are there only hope. If Starman can solve the mystery of the power inside himself, he can send a message that will give them an army. Diana says a Justice League bigger than ever before is needed. J’onn agrees with them all and says they should do all that and more.

At the Hall of Doom, Lex’s body has been reformed, but isn’t complete. Brainiac launches drones that are being sent to make Lex’s offer known.

Analysis: This marks the end of the first arc of Justice League that I’ve reviewed. I need to send a huge thank you to my fellow TBU colleagues Ian Miller, Tony Hammack, and Corbin Pool for helping me with a lot of the history that I’m not that familiar with yet, and for answering my endless questions. I easily could have used Google, but having conversations about comics is WAY more fun!!

With the ending of the Sixth Dimension arc, all I can say is WOW!! This issue is what every comic book should aspire to be. It’s near perfection. I compare comics to soap operas in some ways. They go on seemingly forever and while you get new characters and new stories along the way, getting a proper ending is something that seldom happens in comics, or it is executed poorly. It’s just on to the next issue, the next arc, and the reader is left wondering “what about this, what about that?” Etc….

This, however, has a very definite ending and sets up Snyder and Tynion’s plans for Justice: Doom War and Year of the Villain perfectly. I somewhat lamented in last issue’s review that event after event leads to staleness, but I’ve reconsidered. While I continue to love downtime, character-driven moments, and world-building, this is DC’s big “team” book. This is what the JL is for, huge events, threats that one particular character can’t handle. I’m choosing to embrace that. Let’s break this down a bit.

The good – as the two League’s battle it out, it’s not without humor. We have our Green Lantern making a tank construct, then the sixth dimension’s Lantern constructs a bigger one, and Barry makes a joke about his lack of hair. J’onn also makes a joke about being “green” referencing the level of experience, while he is also literally green.

Batman obviously sees himself as a father figure to Jarro even though he told him not to call him dad. This is shown from Batman swearing during the battle with the other JL, but then scolding Jarro for swearing later in the issue.

Superman using the lessons he learned in his defeats or “grey kryptonite”. I thought he would quit trying the same thing over and over to escape the dark sector, but he didn’t. He was persistent and kept pushing forward, never giving up, even up to the point of near death.

Batman tricking World Forger by not pushing the suns away from Clark and thus killing him, but instead putting them in a faster orbit, knowing that if Clark didn’t give up the suns would give him a chance by recharging his cells.

Batman being Batman and figuring out that while he agrees with Word Forger, he doesn’t agree with the “how” World Forger was creating his multiverse, and that the only way to win and have “Justice” is for World Forger to join the JL.

Snyder leaning heavily on Grant Morrison’s multiversity to have a possible army come help if Starman can figure himself out is brilliant but also somewhat confusing for those not well versed in the huge Multiverse. I’d include myself as one of those people.

The whole sequence of Superman breaking free of the dark sector literally have made me a Superman fan. Snyder and Jimenez do a fabulous job of using the words and art to further explain the six dimensions.

1st Dimension – a fixed point – the dark sector, the planet in which Superman was trapped.

2nd dimension – multiple points, a line connecting points A and B. This is the repeated path Superman took to break free of the dark sector.

3rd dimension – depth, perspective, view, etc…. This is where  DC’s multiverse/dark multiverse is. Superman literally flying through a star to show the depth. More than just a line connecting two dots.

4th dimension – time – Superman’s mistakes of the past allow him to fight on in present, thus creating his future.

5th dimension – imagination. Superman telling World Forger to recreate his cells so he can become a member of the JL and fight alongside them.

6th dimension – the control room, a realm of the impossible. That combining all these other factors, that they can do, and be more than they thought was probable or possible, if they do it together.

Bad – my only very minor issue is that Lex blowing himself up, sacrificing himself etc… was told as a recap of Year of the Villain #1. I realize there was probably no other way to do it, but I would have liked to see that whole sequence initially in a JL issue.

Art – The multiple pages of Superman breaking free of the dark sector are some of the best art I’ve ever seen in any comic, period. Jimenez and Sanchez are simply amazing.

Final Thoughts: The Sixth Dimension arc ends in a surprising,  yet spectacular way. Snyder and Tynion tie up all the loose ends of this inter-dimensional story while also perfectly setting up Justice: Doom War, and Year of the  Villain.