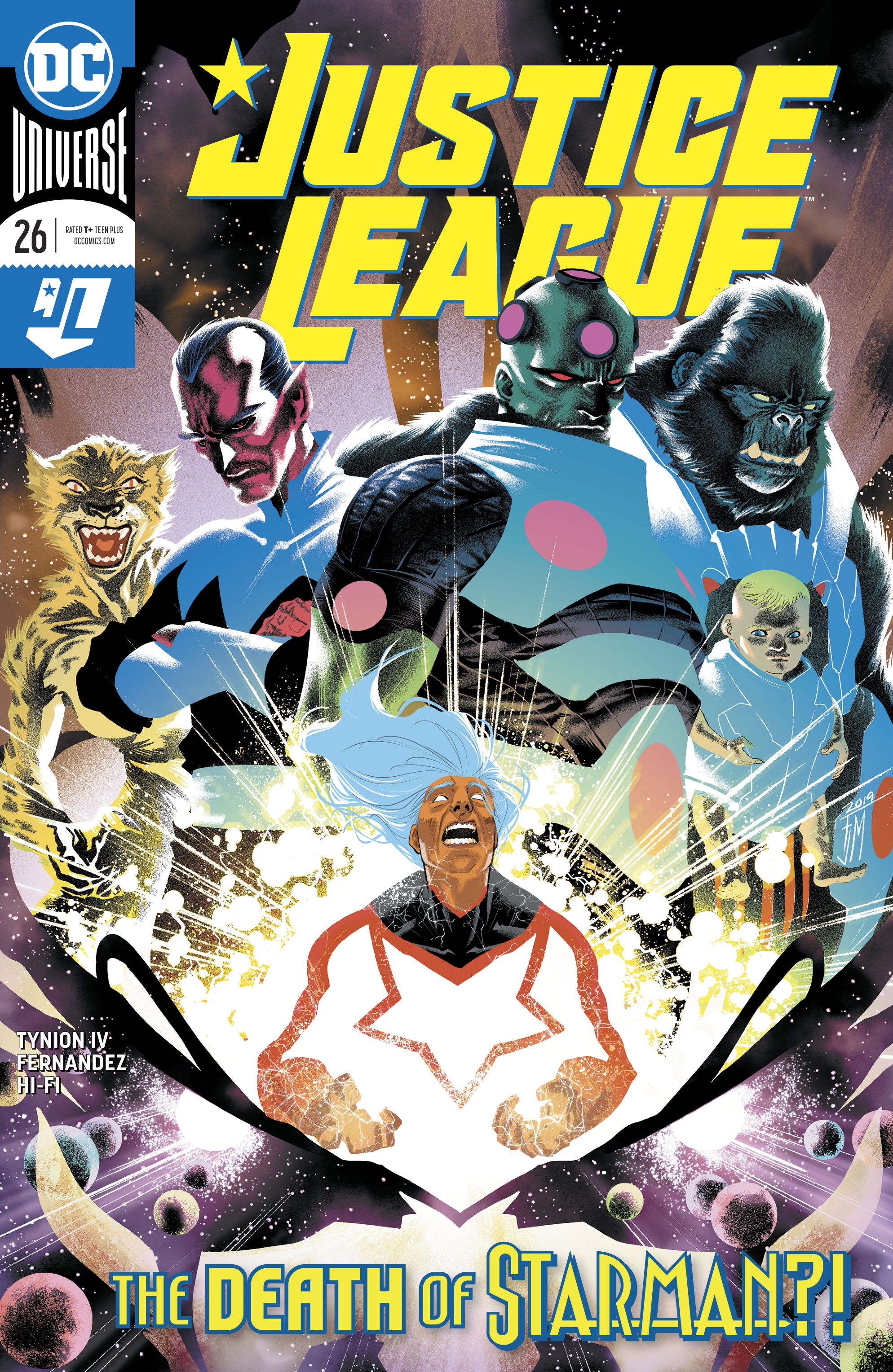 Overview: While the Justice League prepares for the inevitable doom approaching, J’onn hunts down a mysterious cloaked figure.

Synopsis (spoilers ahead): The Justice League is back on Earth, but J’onn is hovering in space listening and looking. There have been thousands of reports all over the country of a cloaked figure offering people that which they desire in their own self-interest. Their evil thoughts and dreams are granted by the cloaked figure. We see Vixen, Green Arrow, and Batwoman show up at various places across the country trying to stop the evil deeds from being done, but arrive too late. Some of the claims are true, many are not. It’s impossible for the JL to track them all down. J’onn also ignores a priority call from Kendra to return to the Hall of Justice, because he plans on tracking the cloaked man down, even if he has to chase him to the ends of the earth.

At the House of Heroes, we see heroes from all of the other earths in the multiverse gathering. Barry and John joke about some of the different heroes to stay away from, and how Barry has done this whole multiverse thing many times before as if it’s no big deal.

Captain Carrot pledges the help of the Zoo Crew.

Superman addresses the whole group of heroes and gives details of the multiverse dying. He also warns that Perpetua can’t be allowed to rise and gain power and have doom/evil take control. He also states that the heroes need to band together to show that justice can be believed in and is attainable. He tells them that they need to fight as one while apart. World Forger then comes forward and says that the heroes from the other earths can help by finding his brothers, the Monitors.

We then are shown numerous places in the Hall of Justice all working toward multiple goals. Locating the Legion of Doom and Perpetua are a top priority as worst case scenarios are being formed. Also, Hawkman and Black Canary are seen training the Teen Titans. Members of Justice League Dark are also tracking down leads of the Hall of Doom’s location.

Jarro tells Mera and Kendra that Starman has passed out again while trying to reach out for help to other parts of the totality, but with no success.

The Justice League is trying to expand its roster from on earth, the multiverse, and through time itself, but Kendra still doesn’t think it’s sufficient enough for what they’re coming up against. Kendra is also at odds with herself over her relationship with J’onn and the fact that they have Shayne with them now on earth.

J’onn gets confirmation of the location of the cloaked figure who is in Spring Hill, California by probing the mind of a woman who saw him.

Someone watches as J’onn approaches from the road the house where the cloaked figure is. J’onn is expecting to find Lex in the house but is confronted by Lionel Luther, Lex’s father who says that J’onn’s story began there and now will end there too.

Analysis: This isn’t a Legion of Doom issue but we have James Tynion writing and a new artist, Javier Fernandez. Tynion has become one of my favorite DC writers, so I look forward to reading any book when I see his name on the cover.

The idea of a House of Heroes is a great one, but there are some glaring omissions to the heroes assembled. Where the heck are Aquaman and Hal Jordan, or any of the other Earth Lanterns besides John?  Or the entire Green Lantern Corps? If Kendra was seriously considering having J’onn mentally granting every human mastery of martial arts, then surely the Green Lantern Corps could be of use. Aquaman and Green Lantern (Hal Jordan)  are founding members of the Justice League going back to 1960. To not have them here now is kind of ridiculous and disappointing. My hope is by the end of this arc we’ll at the very least see Arthur and Hal. (Editor’s Note: Aquaman and Hal Jordan are currently appearing in solo stories in their own titles.)

There’s a lot of activity going on in the Hall of Justice. This not only shows how important this threat is, but shows many different characters and what they were doing in their preparation. I appreciate the vastness and reach of expanding the roster of the Justice League, and showing training etc, makes it feel more real.

J’onn is the leader of the Justice League but isn’t acting like it.  Ignoring the call to return to the Hall of Justice so he can instead track down the cloaked figure is selfish on his part. A leader would if nothing else check in with Kendra and tell her what he’s doing.

Final Thoughts: While James Tynion and Javier Fernandez do a great job of showing us the “calm before the storm” as the JL prepare for impending doom, as the identity of the “cloaked figure” is sure to be a big factor in the coming issues.