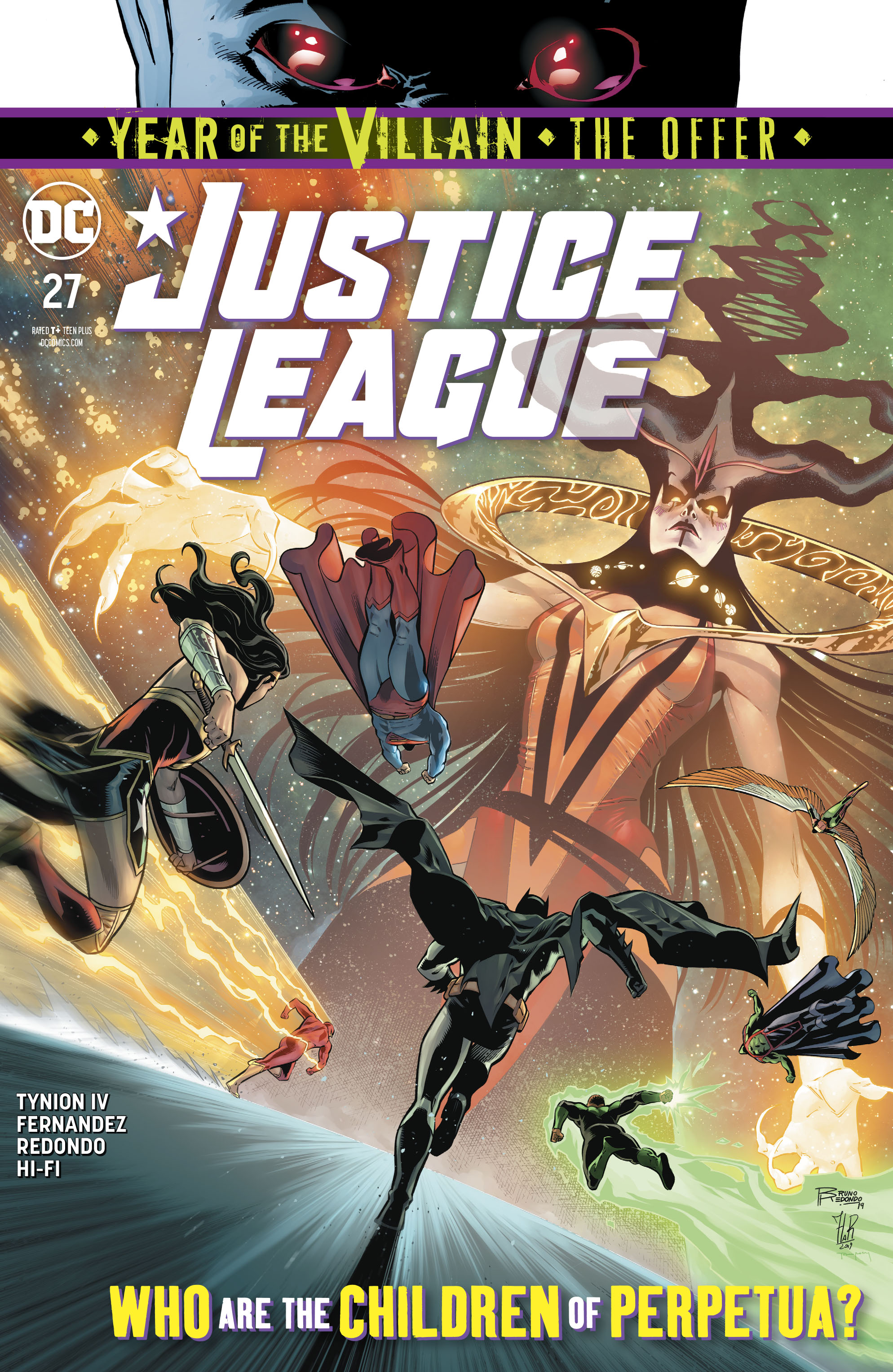 Overview: J’onn continues his search for Lex, while the rest of the League try and find the Monitors.

Synopsis (spoilers ahead): J’onn dreams of being held captive by Lionel Luther so Luther can gain genetic secrets from his body, while a young Lex Luthor is the only person that will help him.  He wakes and wonders if he is still dreaming but finds he is not and is again being held captive by Lionel Luther. J’onn manages to escape and attacks Lionel, but finds it’s an Amazo android and that his real captor is Professor Ivo.

On the planet Nil – the Justice League, or part of the JL are on the home of the Monitors, before the “Final Crisis” looking for the “one” monitor – the first one.  We’re then led through a very brief description through words and pictures of the crisis stories, and a few other pertinent events throughout the history of DC. Crisis on Infinite Earths, including Barry’s death, Infinite Crisis with Alexander Luthor and the monitors, as well as the Dark Multiverse where the original Monitor, Mar Novu began to reform as his own self.

Back on Earth, Professor Ivo tells J’onn that instead of building perfect weapons out of androids, Lionel wanted to build the perfect weapon of flesh.  He tells J’onn that Lex gave him Lionel’s lifework in payment for repairing/healing Brainiac. Lex also gave Ivo the mission of creating the “Apex Predator”, a being capable of wielding the powers of the universe, and that the secrets of building the Apex Predator are inside of J’onn.  Kendra suddenly bursts in and destroys one of the Amazo androids, but there are more. A lot more.

At the Hall of Justice Shayne is trying to find his parents.  Mera can’t help because she needs to help Atom. Shayne then talks to Starman and questions if he even exists.  Starman pokes Shayne showing him that he does in fact exist and that Shayne is made from “possibility”, meaning in the sixth dimension.  Starman asks for Shayne’s help, and Shayne agrees.

As J’onn and Kendra continue to fight the Amazo androids, J’onn tells Kendra that Ivo used his body/DNA for Lex’s mankind/Martian creatures to fight in Perpetua’s army as the Apex Predator, immortal weapons of death.  J’onn then asks Ivo where Lex is, and Ivo says that Lex is dead (as seen in DC’s Year of the Villain Special).

Kendra and J’onn then see they are being watched by a drone.  Lex’s voice speaks from the drone and thanks J’onn for cleaning up the Amazo mess.  Then a hologram of a cloaked Lex tells J’onn he has an offer for him, and he can give J’onn what he’s looking for.

Analysis: Wow, where to start.  If you aren’t a longtime DC fan and know the history of the DC Universe and it’s very confusing continuity, you can easily be confused after reading this issue.  I’m not an expert in the continuity or history by any means, so I need to thank Tony for his help!

I said in my review of Justice League #20 that I thought this whole run of Snyder/Tynion is a “crisis level” event and Tynion touches on all of DC’s crisis’ going back to the late 80s.  While confusing, he does this in a way that makes it all relevant to what is happening now with the JL.

In issue #26 at the House of Heroes, World Forger told the heroes from the other earths that they could help by finding the Monitors.  Well, in #27 the main League team finds Mar Novu, and he tells them where the Anti-Monitor is, so this was basically a waste of a great chance to use another team to help.  Maybe we’ll see another team from another earth help find him, but after all the set up in the previous issue, we get no pay off in this one. We actually don’t see one other hero outside the main team other than Atom in one panel.

The drone looks like a cross between the Hall of Doom ship, and an Imperial probe droid from Star Wars.  It’s a great way for Lex to make his offer throughout all the DC books.

The art is fantastic!  Bruno Redondo’s first JL cover is one of my favorite covers in a long time!

Final Thoughts: We move the story forward, and while I appreciate making the previous crisis’ relevant, not following up with all the set up of needing help from heroes from other Earths to find the Monitors in issue #26, is a disappointment.