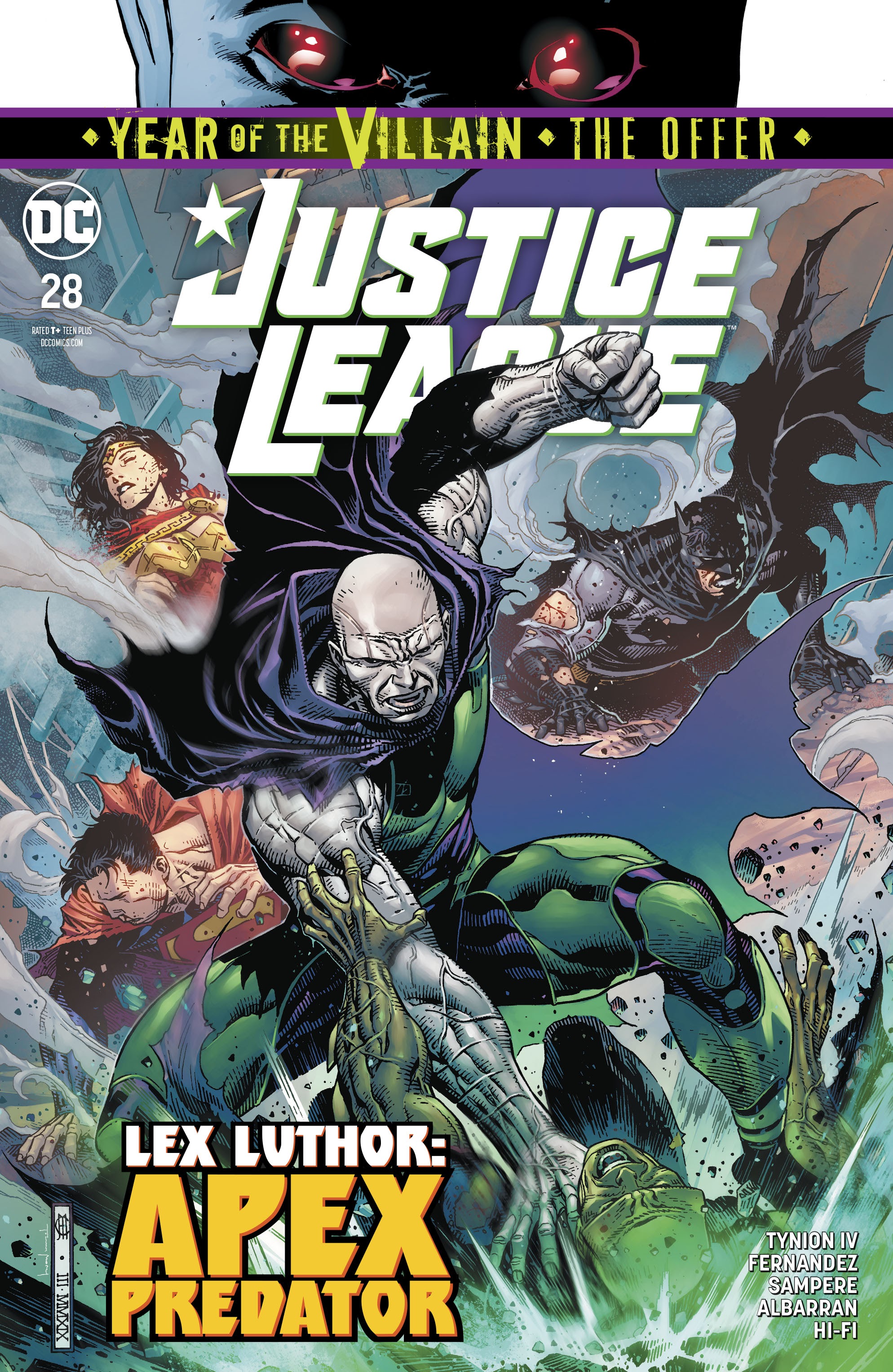 Overview: As the Justice League searches for Anti-Monitor, Starman gets Shayne’s help, and J’onn finally comes face to face with Lex.

Synopsis (spoilers ahead): J’onn and Kendra fly over America towards coordinates given to J’onn by Lex’s drone. Kendra implores J’onn to call for backup, but he refuses, saying Lex would know. Lex communicates telepathically with J’onn and tells him to put Kendra into a deep sleep and an entrance will appear on a rock surface. If J’onn doesn’t comply, Lex says he’ll never talk to him again. J’onn does as Lex says, and says he’s sorry to Kendra as he puts her to sleep with his mind. An opening appears and Lex tells J’onn to follow him. They enter a base constructed by Lionel Luther and other scientists that had worked for the Legionnaires club.

On Qward in the Antimatter Universe, the main Justice League team finds dead bodies all around. John says the dead beings were “weaponers of Qward” and some of the “most twisted beings” he’d ever come across. Mar Novu says it appears the beings were building something for the Antimonitor and were killed when they were of no more use to him. Batman says they’ve arrived too late because there’s a message written in the weaponer’s blood. Mar Novu translates it and it says “do not follow me.”  Barry and John question what they should do now as Anti-Monitor could be anywhere in the multiverse.

Back at the Legionnaire base, J’onn recognizes that this is where Lionel took J’onn when he was a boy. Lex wants to show J’onn what he’s been working on and tells J’onn that he’s made some enhancements to himself that would prevent J’onn from gaining any information from him that Lex didn’t want him to have. Lex shows J’onn a three-dimensional map of the world with many villains and their locations marked. He precedes to tell J’onn that his drones made many offers and Lex’s money has tipped the scales to the villains’ side. J’onn questions why Lex is doing this and Lex explains that the universe is dying and that if they join their human/Martian bodies together they can become Apex Predators and rule all existence in the name of Perpetua.

Back in the base, J’onn tells Lex that he’s insane. Lex tells J’onn that he’s been hacking J’onn’s mind while they’ve been talking, and he’s destroying his mind while taking J’onn’s power and essence into his body. Kendra suddenly breaks through the wall, as J’onn had woken her up to try to help him. Lex immediately puts up a force field between them. J’onn tells Kendra that Lex is insane and she needs to run, as his body is fading away. Kendra pleads with J’onn to hold on and to fight back but to no avail as he dies. Lex says that the scales are tipping in the Legion’s favor and that they are in Qward to kill the Justice League.

On Qward, the Legion of Doom confronts the Justice League. John says they need to run. World Forger agrees. So they leave.

At the Hall of Justice, Starman tells Shayne that he saw the end of everything.

Kendra tells Lex that they will win and that she will kill him for killing J’onn.  Lex tells here that the base will destroy itself and to “bring it on”.

Analysis: A whole lot is going on in this issue and it’s a really good issue too!  James Tynion ties up the Apex Predator arc in fine fashion.

The “big” thing in this issue, of course, is the death of J’onn. I didn’t see it coming. I assumed he’d track down Lex and at the very least try to save Lex. He didn’t even get a chance. J’onn, while wanting to help Lex, wasn’t acting as a good leader. He was selfish, and ignored his team completely, and did only what he wanted. Of course, that doesn’t justify his death by any means. But, this being comics, means that he most likely won’t stay dead for very long. Thus, making his death even less meaningful.

Starman, Jarro, and Shayne continue their very small part of the “C” plot. But with Starman seeing the end of everything and the tease of Jarro being a big part of the next issue, their small part doesn’t mean it’s not a very important one.

With the main Justice League team leaving Qward without any idea of where the Anti-Monitor is, I’m really hoping that we get some payoff from the huge set up in issue #26.

The art team continues to be among the very best of what DC is offering in their books.

Final Thoughts: With Lex tipping the scales in Doom’s favor, and the whereabouts of Anti-Monitor still unknown, the scope and importance of the Justice League book in the greater DC Universe is very high.