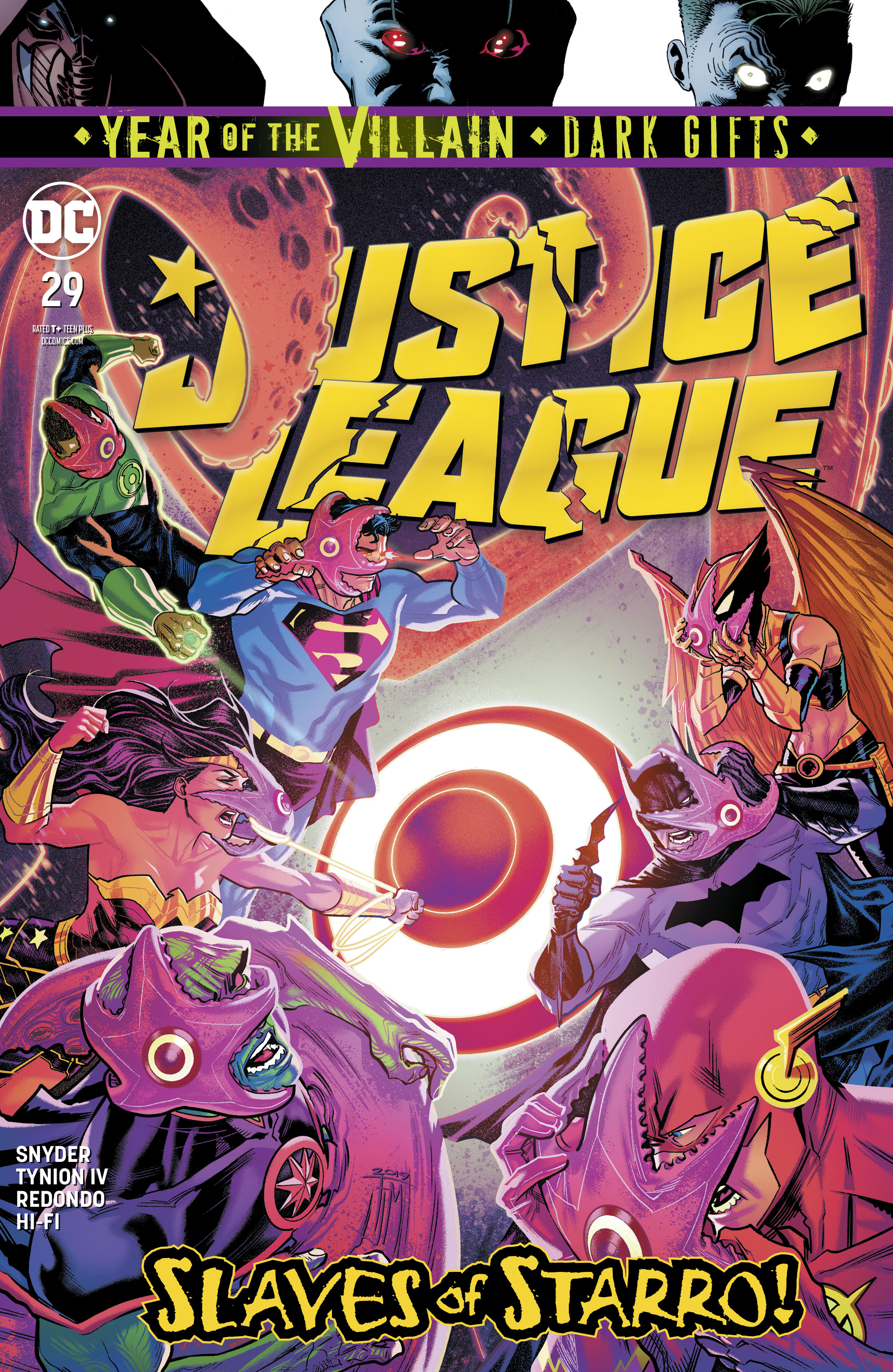 Overview: While Jarro recounts his origin, an ambush on the Legion of Dooms ensues…Or does it? What secret is Jarro hiding from the entire League?

Synopsis (spoilers ahead): We begin with an overview of the universe, and how, like a jar, everything within the universal walls must obey the same laws of nature and science. That is, except for the planets born outside these ‘walls’ – the ∅-worlds. These rogue planets are chaotic and mired in an exotic and strange life. These are worlds that are not meant to exist. They are worlds where every form of life has a singular purpose: to destroy and dominate, eliminating one another until only one race remains. It is through this bloodbath that a single successor emerged – Star-∅. Deemed “Starro the Conqueror”, we are told that countless species and planets have fallen prey to its dominance, for Starro is the ultimate ruler.

We cut to our Robin-clad Jarro eavesdropping on the Legion of Doom while the Justice League weighs their options, recounting how this war with Doom began. First came the Dark Multiverse invasion, then the crack in the Source Wall, followed by the teams that formed within No Justice – an event where Starro sacrificed his life for our heroes. Shortly after he was reborn into the hero known as Jarro – a hero that confronts the Legion of Doom head-on.

As they ridicule Jarro for his small stature, Jarro unleashes a monstrous “Bat-Cannon” upon his prey. While a devastating strike, Luthor recounts how he has gathered almost all the seven dark forces in the universe, and how Perpetua will soon rise. As the Legion corners Jarro and pontificates about their impending victory, the Justice League strikes! But Jarro harbors a deadly secret. He has seen the future, and the Justice League is destined to lose to Doom. In fact, this entire fight is a façade. Jarro pretends to sacrifice himself to save the League, but Batman determines that his mind is being controlled. Jarro has affixed himself to each of the League’s faces where he was going to take the League to the O-World and keep them safe while the Legion of Doom ravages the world. Batman convinces Jarro that hope can exist and that they should continue to battle despite the undesirable odds. Concluding in an emotional embrace between Jarro and Batman, we are teased with the fact that the Legion of Doom has a tentacle from the original Starro, which they hope to regrow and use for their domination.

Analysis: With Snyder back in the fold, I find my interest considerably piqued. Although I enjoy Tynion’s scripting, I found the last couple of issues slightly wordy, resulting in some pacing issues. While we do experience excessive recap, Snyder and Tynion have discovered a balance here that is exactly what a Justice League book should be. We are treated to epic stakes, tender character moments (seriously, that embrace brought the biggest smile to this reader’s face) and wide-scale cinematic action. Bruno Redondo does a wonderful job on art duties, and Hi-Fi’s colors present an ethereal setting befitting for our tale.

While balancing the larger plot, I am very impressed by the characterization of Jarro. Snyder and Tynion have taken a villain I cared very little for and completely fleshed him out. His narration at the beginning of the issue cannot be taken with total credibility (at best, Jarro is a…unreliable narrator), but his desire to uphold the ‘Robin’ mantle is adorable. Couple that with the fact that Snyder and Tynion are able to elicit genuine emotion from a scene involving a man dressed as a bat hugging an extra-terrestrial starfish, and you know we’ve got a winner.

Of course, the excess of expository information might be slightly off-putting – especially to long term readers – but I found it insightful and an excellent summary of past events. After twenty-eight issues (plus prior events) it can become difficult to remember all of the minute details that have led to where we are, and I was more than happy to relive them here (alongside some fabulous new art from Redondo and Hi-Fi). The stage is now officially set for the Justice/Doom War – let the battle commence!

Final Thoughts: Snyder and Tynion do an excellent job with this prelude to their epic climax, catching up lapsed readers while balancing epic stakes with fulfilling character moments. I cannot wait to see where we go from here.