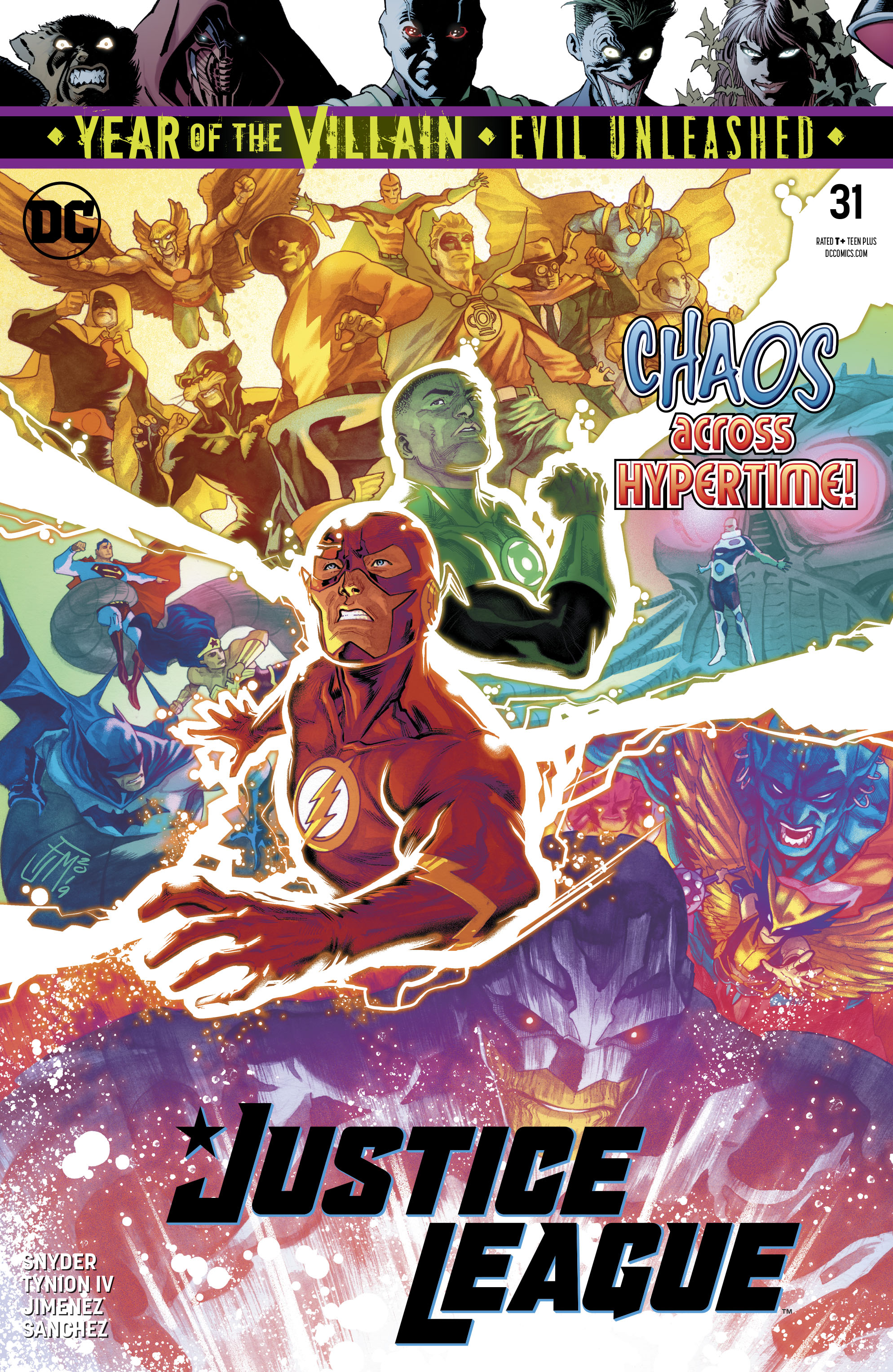 Overview: As our heroes travel through the past and future, could a newly formed alliance be the catalyst that tips the scales in Doom’s favor?

Synopsis (spoilers ahead): As Perpetua and Lex travel to the edge of the universe also in search of Anti-Monitor, the Justice Society comes face to face with the Flash and Green Lantern of our time. Barry does what he does and makes light of the issue to great effect. John says they have no knowledge of superheroes from the forties.

Meanwhile, Brainiac looks in on the Justice League team in the future as they talk with the last boy from the future’s Earth, Kamandi.

Kendra is narrating throughout these first few legs about how things aren’t going well for the Justice League, and that they’re losing. Badly. Kendra wants to end it all by killing Luthor, but Shayne tells her that revenge isn’t the way. Shayne has a physic link with Luthor after Luthor consumed J’onn’s cells, so the new plan is to track Luthor to the edge of the universe in search of the Anti-Monitor.

In the past we get some introductions by the JSA and Flash/Green Lantern. Dr. Fate says it’s dangerous for any interactions between the teams from different times. The JSA’s Starman realizes the Legion is probably after his cosmic rod. He says that he entrusted it to the US Government to see if they could use it as the country is on the brink of a new World War. The location of the shard is at a rather interesting location…a military base in the Pacific. We then get an announcement of the first JL/JSA team-up!

In the future, Batman figures out Brainiac is holding multiple realities as he also searches for the Totality piece.

Monitor, World Forger, Starman, Shayne and Kendra head out in a  quest to find Anti-Monitor, but quickly realize they’re in a race to beat Lex and Perpetua to him.

Jarro is used as a radio of sorts and a message is sent out through time for the JL to quickly return home if they have any chance to win this war. As this is happening Batman, Wonder Woman, Superman, and Kamandi travel again through time to what is possibly the correct future. They’re greeted and rebuked as it appears they’re too late yet again.

In the future the Legion is taking part in one of the biggest events in American history, as Lex puts out the call to destroy the Justice League at any cost.

Our unknown cloaked figure from issue #30 beats everyone to the end of the universe and allies himself with the Anti-Monitor.

Analysis: This issue continues the great adventure through time brought to us by Snyder, Tynion, and Jimenez.

I love the way the word balloons transition from page to page as the next scene unfolds.

A big part of this issue is reintroducing the JSA into DC continuity, and it’s done with great care. There’s admitted confusion and acceptance that the JSA was literally wiped away from DC history. There are some nice nods to the DC Rebirth one-shot by Geoff Johns while referencing universes being “bottled” up.

While literally everything that Johns is doing has been massively delayed, I think DC is using the JL and Scott Snyder to lay the path of DC continuity and set us on our way. The aftermath of Doomsday Clock and its ramifications may never be known as it may never end.

We get some much needed humor and levity again in this issue by Jarro and Barry.

Some of my biggest questions are answered this week as well. Some of the answers just raise more questions though. Aquaman finally makes his appearance!  But as Anti-Monitor’s ally?! And Aquaman calling him “Lord”?  I’m not a DC or Aquaman expert by any means, but this is totally out of character for Aquaman. Aquaman as the cloaked figure that gave Mera a beat down in issue #30 to get through the portal and beat everyone to the universe’s edge doesn’t sit well with me. At all. Is this “our” Aquaman, or one from an alternate time?  Considering he’s in Amnesty Bay in his solo book with its own Year of the Villain tie-ins, this could be a continuity issue.

Here’s my “hot take” as it were on how this will end.  I think Ric and the Nightwings will travel back in time.  This will solve two major problems.  Ric can see Dick, and become his own true self and help win the JL/Doom war.  AND it can end the nonsense of the Nightwing book, and get things back on track there.  I mean, Aquaman had amnesia too, and has shown up in JL, so why not Ric??

The art by Jorge Jimenez continues to be a highlight. His detail and backgrounds are fantastic. His take on space is very unique too. A mention should also go out to the fabulous cover by Francis Manapul. It’s one of my favorite covers in a long time. He manages to give us a glimpse of all the storylines all in one cover.

Final Thoughts: While I may not particularly like or agree with the cliffhanger, I can’t deny that this is a really really good issue. I can’t wait for the next issue!