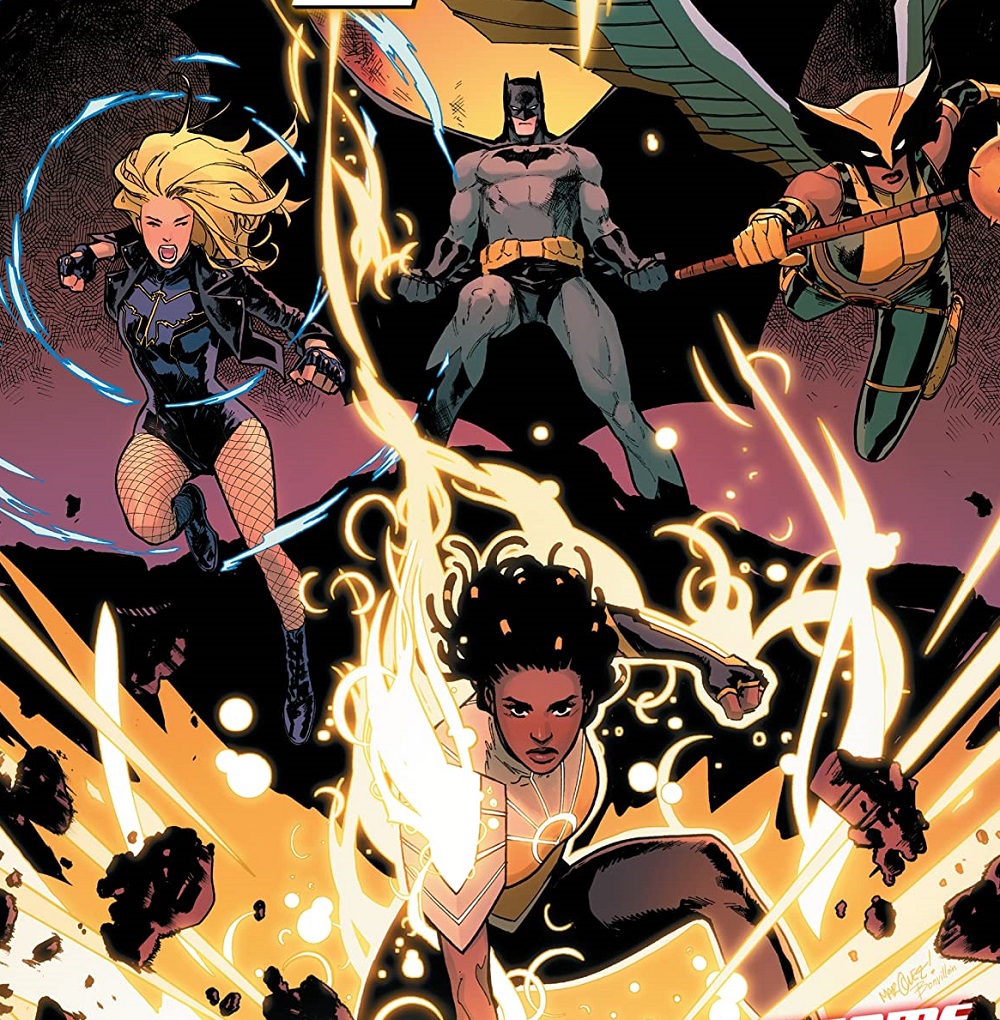 Synopsis: Continuing from the last issue, Brutus has returned to his homeworld, where he eagerly awaits to go back and conquer Earth. As he and his partner discuss the possibility of returning, they detect a disturbance that alerts them to the arrival of the Justice League on their own turf.

The members of the League have ended up in different areas, almost all of whom find themselves surrounded by the enemy.

Each of the meta-beings experiences a dramatic surge in their abilities; Black Canary’s cry literally blows the enemy away, Naomi finds that she begins to fade, Superman’s heat vision becomes too powerful for him to handle, and Hawkwoman feels stronger than ever. We are not to see the change in Aquaman’s abilities, however, as he suffocates from lack of water and passes out.

Thanks to the Canary Cry, the Justice League (minus the unconscious Aquaman) gravitates and reunites to face off against Brutus and his homeworld cohorts. Superman once again in control of his powers and is caught off guard by Brutus, who dispatches him quickly. Not long after that, Brutus takes down Black Adam. As the rest of the able Justice League members descend upon him, Brutus delights, knowing that a new world will soon be in his hands.

Analysis: This new world amplifies the powers of the meta-beings in Justice League #61. It’s not for certain whether this surge is due to whatever native forces this world or dimension has, or if this has something to do with what Brutus’ partner refers to as this world’s ‘super-powered event,’ which we might assume was a contributing factor in the world’s demise.

We see the surge in the meta-powered Justice Leaguers, but there doesn’t seem to be any difference in the powers of Brutus. This could have repercussions on the effects of the Leaguer once (and, of course, IF) they return to their native Earth. If Brutus was affected by the ‘super-powered event,’ then it seems to be a permanent upgrade of sorts to his native metagenes, since his own powers, as far as we can tell, didn’t diminish when he broke through into Naomi’s adopted world. If that’s the case, then we may expect to see the same in the powers of the rest of the Justice League that have visited this new world.

If, however, this surge is simply a byproduct of this foreign universe, then we can presume that the effects would wear off once they return home. In this case, it’s better for the Justice League to quickly regain their composure and return to the fight and take down Brutus et al on the world of their enemies while they have the excess in powers.

While this unexpected effect has put the members at a disadvantage despite their spike in power, Batman (as always) is the first to get a handle on things. He quickly assesses and addresses Naomi when her anxiety begins to overtake her and walks Kal-El through his own when he finds himself out of control. Batman is the countermeasure that will swing the pendulum in favor of the League to take on Brutus and his partner, showing that here as on the home Earth it takes more than mere brute strength to carry out the mission.

Synopsis (spoilers ahead): In Justice League Dark backup in Justice League #61, John Constantine, Etrigan, Zatanna, and Detective Chimp arrive at the bookshop Merlin had just visited and unleashed fictional creatures upon, which Ragman was trying to subdue. After literally dispelling the creatures, Detective Chimp scours the scene and deduces that Merlin must have left this world and entered into the Library of Babel. The Justice League Dark pursues and finds that Merlin had indeed been here and has unleashed more creatures that are now patrolling the infinite library. Realizing that it would be nearly impossible to find Merlin on their own in this impossibly large library, they seek out its librarian.

Meanwhile,  the thirteenth knight of the Round Table of King Arthur awakens in a hospital after being recovered from the ruins of the priory after the events in the first issue of the arc. Guided by a disembodied voice, she flees the hospital and heads to Gotham City on her quest to retrieve her stolen sword and Alchemist’s Stone.

Analysis: In the Justice League #61 backup, Constantine and the team are still hot on the heels of Merlin, though the story gives us little to dig into. They enter into the pages of the written word in order to stop its fated destruction by the evil wizard, while Elnara, the thirteenth knight that never was, awakens into our world and, despite her unfamiliarity with its ways, still perseveres on her simple quest to restore its honor and therefore make a name for herself.

The 'super-powered event' element that has caused the surge in the abilities of meta beings is interesting and adds to the lore of Naomi's origins. I was a bit disappointed that we get to see Black Adam in a bit of a badass scene, but the fight is taken off-panel and we don't get to see how he was dispatched. He seemed to be in full control of his heightened abilities, and it seems a missed opportunity to showcase how his style would have differed from Superman's. The backup of this issue is still interesting, but didn't really advance the story all that much. I was hoping to see Rory use his souls during the confrontation, seeing as how the title was 'Enter the Ragman', but he offered little to the arc here.