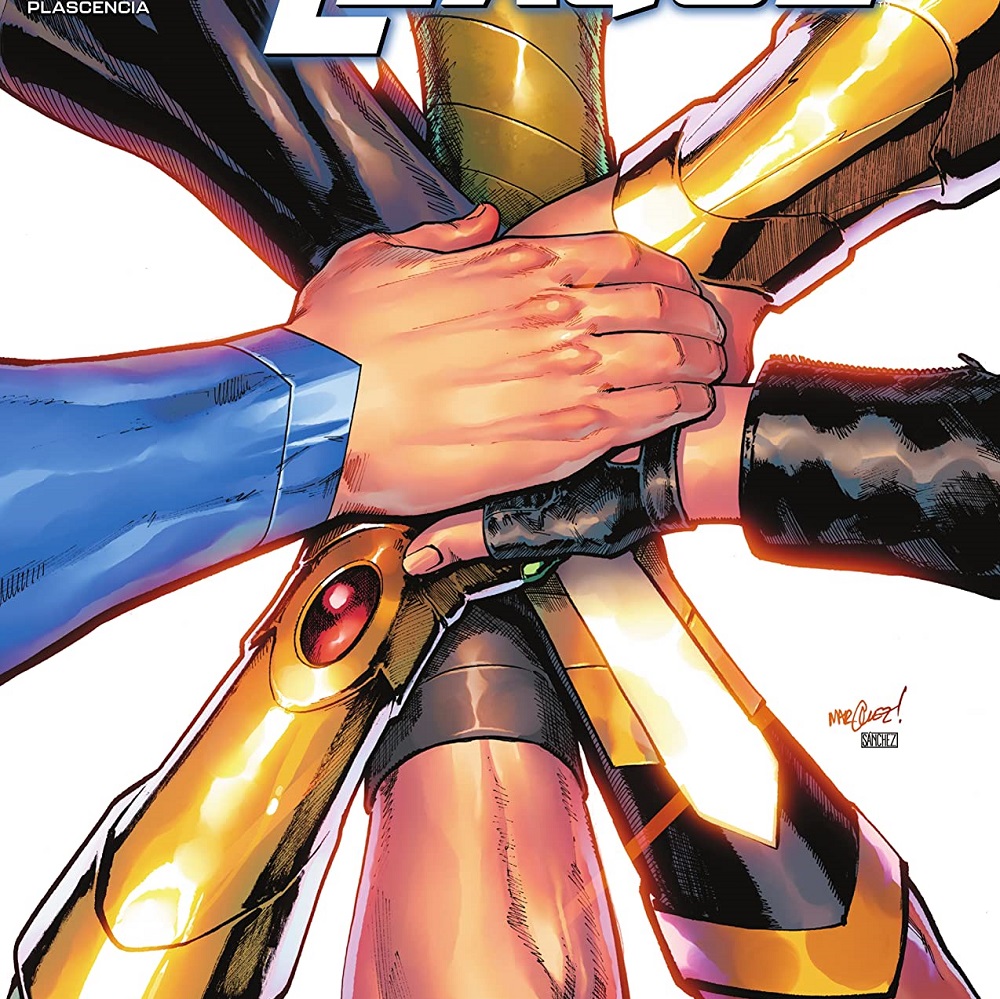 Overview: In Justice League #62, the Justice League continues its losing battle with Brutus on Naomi’s homeworld until help arrives in the form of Hippolyta, the Flash, and a tank! In the Justice League Dark backup, John Constantine and his band uncover what Merlin has checked out of the Library of Babel.

Synopsis: As Justice League #62 begins, Hippolyta arrives at the Hall of Justice to apologize for her behavior a couple of issues ago. She finds it empty save for the Flash, who fills her in on the events she’s missed out on. Through their discussion, Barry Allen makes a key discovery: he’s made an error in his calculations on sending the League to Naomi’s homeworld, and has gravely risked their lives.

Meanwhile, Aquaman awakens to find himself in the home of a small family who has rescued him from Zumbado’s ‘No Zone,’ from which he had arrived in this world in the previous issue. He asks to be brought to any nearby water sources, which are unfortunately scarce in this area. He gets little information before an explosion erupts before him and his rescuers.

Elsewhere, the rest of the Justice League are still trying to adjust to their powers while simultaneously taking on the threat that is Brutus. After the Flash’s revelation, we now begin to see the League, and especially Superman, begins to succumb to fatigue and the inability to readily rely on their powers. Brutus begins to regain the upper hand and is nearly ready to end the fight when help comes in the form of Aquaman driving a war tank. Despite this new and unexpected addition, Brutus still manages to hold his own against everyone and, at one point, lunges Naomi high into the atmosphere, where through her point of view we get to see the face of this world, desolate and lonely under Zumbado’s reign of destruction.

Brutus is finally taken down by surprise as Hippolyta and Flash arrive on the scene. Hippolyta issues a challenge to any would-be attackers, while Barry Allen warns our heroes that they must leave now, as their presence here is poisoning them. Before they can return home, however, they are confronted by the master of this world, Zumbado.

Analysis: Taking a fight to the enemy’s home turf at a decided disadvantage is never a good idea, and the fight is taking its toll on the Justice League. While in the previous issue this had been thought of as an upgrade to our heroes’ powers has instead been proven a double-edged sword, as we find that the League members have been ‘poisoned’ of a sort by the miscalculations of the Flash when he sent Superman and the others to follow Brutus.

The idea of the miscalculation lends a more interesting groundwork to the story. Previously, I had assumed that the nature of this new, non-multiverse world was the cause of the power changes with the Leaguers, but with the revelation in Justice League #62 that it was a mistake made by the Flash, this opens up new doors for future storytelling. Flash has always been able to mess with time and space, but we’ve rarely seen the results a minor mathematical shift can have on others in a more physiological sense.

We are three issues into this soft reboot, and we have become accustomed to six-issue arcs. This has the feeling of being halfway through the storyline. It seems like the last couple of issues have really focused more on brawling and quips than on progressing the story, which feels like a predictable lull in a tale that could be better served being told in fewer issues. This does get to showcase beautiful, broad artwork, but it at times does have the unfortunate consequence of seeming like filler than a meaningful story-driven beat.

When Naomi sees the world from above, we see for the first time the desperation of the people of the planet. They are harsh and brutal, but for the first time Naomi comprehends their lot, and sympathizes with them, as we see in her resistance to leaving them on the Flash’s warning. It would seem that she will be preoccupied with this world’s destiny as her responsibility in the future, probably in the second installment of her own title. In order to save ‘her’ people from their certain doom, she and her allies will need to face off with this world’s master.

Synopsis: In Justice League Dark, John Constantine and the team probe further into the Library of Babel in search of Merlin. Constantine questions Jason Blood’s current status quo, and Rory discovers a book of secrets in which he finds that Zatanna is still under the increasing persuasion of the Upside Down Man.

Bobo tests out a theory and realizes that more books can be created by adding more characters to existing ones, thereby summoning The Man of Books, which they do. Through him they finally understand what Merlin is after: the ancient city of Atlantis.

In the ancient city of Atlantis, Merlin descends to the ruins and leaf through his book, attempting to awaken its magic.

Analysis: John Constantine confronts Jason Blood, who has been delivered of his bond from the demon Etrigan, and had spent his recent time in Heaven. John questions him on his presence back on Earth, but with no actual answer in reply except a cryptic sidestep into Zatanna’s reluctance to use her full powers.

Zatanna’s plight is brought up again in these few pages when Rory comes across a meta book that contains the notes of Ram V, author of Justice League Dark, in a deux-ex-machina device that reveals that Zatanna is suppressing herself because each time she uses her powers, the Upside Down Man’s influence over her strengthens. Rory is likely the best-equipped member of this team to deal with this information as, in his guise as Ragman, he is likely the only one to be able to separate her from this parasitic soul’s clutches. While in some stories in which this fourth-world conception can come across as silly, it here actually adds to the mystique of the world, one in which multi-layered magic is the norm, and especially in the Library of Babel, where exist books that have never been read by human minds.

We see again the Man of Books, the Librarian of the Library of Babel. He is drawn as a rather normal and unassuming man in a suit, except attached to him is a cape-like binding of humanoid book pages, which seem to have some sort of sentience. While this is a cool concept on paper, it’s an odd design to get used to seeing in the artwork. The idea is novel, but its use seems somehow unpragmatic.

The main story continues to slog along with a focus on action peppered in with little storytelling progression. The voice that Brian Michael Bendis uses for his characters still seems to be indistinguishable from each other, which is jolting. Any of the heroes' speech can easily be replaced by Brutus or any other regular citizen wandering around. I can't really ignore this 'sameness' of personality, and it takes me from the story, which is mainly carried by the admittedly gorgeous artwork, which covers while simultaneously emphasizing the simplicity of the events themselves. Justice League Dark, by contrast, is frustrating only in its short length. The story seems tighter in its telling, and the detailed artwork here continues to add to the gritty and complex nature of the story.