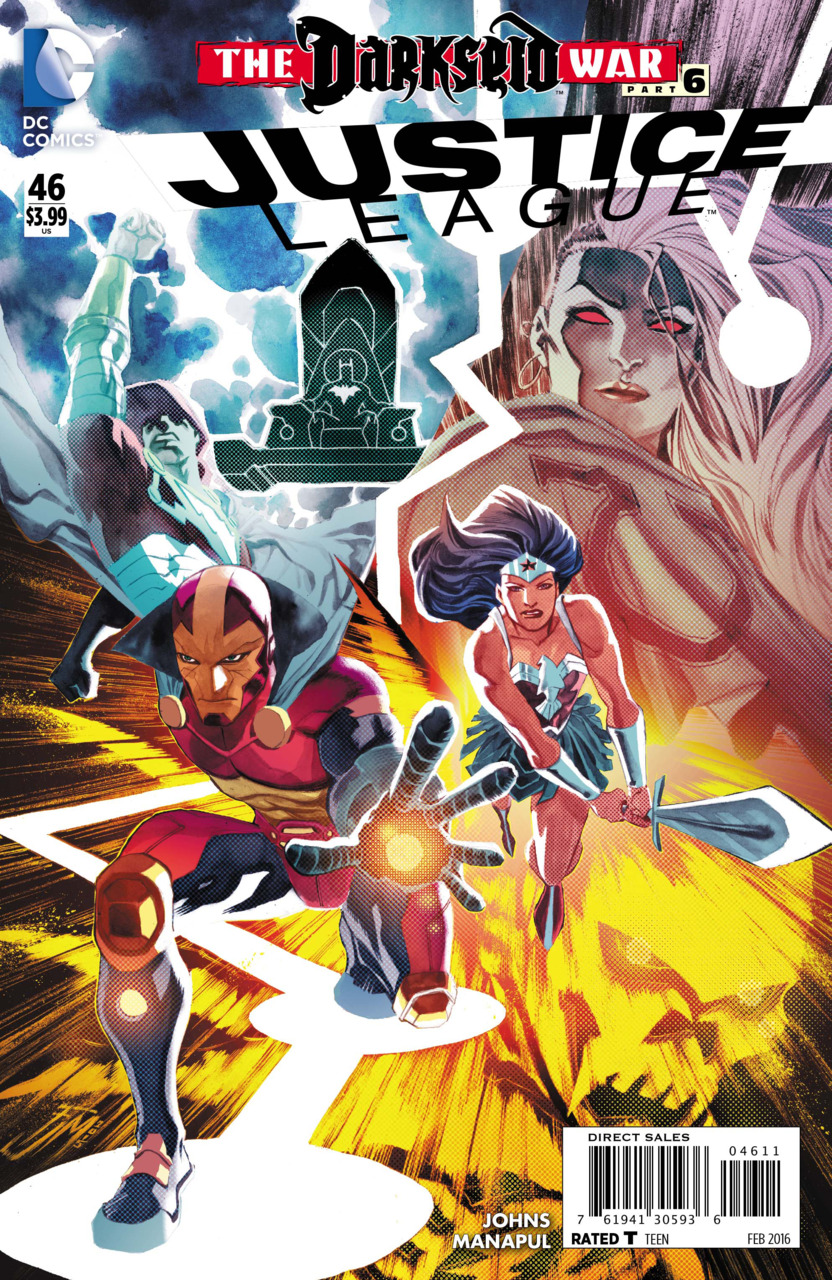 As it has been in previous issues of Darkseid War, Wonder Woman’s opening dialogue centers on a Greek myth. She chronicles the story of Ino of Thebes who gave birth to Zeus’ child and angered his wife. The story ends with Ino and her child being rewarded with godhood through the power of Zeus and eventually helping the hero Odysseus cross the sea. Wonder Woman parallels the story of Ino to that of the Justice League and its current struggle with the gods.

The rest of the League that has not been changed into New Gods is still battling remnants of Darkseid’s army. Scot Free is almost killed by the assassin, Kanto, when Big Barda shows up to teleport Kanto away. Scot explains to a surprised Steve Trevor that the new arrival is his wife. The fighting eventually calms down enough for Big Barda to question Darkseid’s followers. They inform Barda that, even with Darkseid dead, their fight is not over and that they will continue to serve Darkseid. Kalibak states that it is the Anti-Monitor that he wants to destroy now.

In the Rock of Eternity, it is revealed that Metron may have made a deal with the Anti-Monitor that could destroy the entire universe.

Back on Earth, the League decides that they need to break into Belle Reve to gain access to the remaining members of the Crime Syndicate given their past with the Anti-Monitor. Scot and Barda volunteer to help break into the prison. After they teleport away, Steve Trevor and Wonder Woman are left and they begin to discuss their relationship. Right before Trevor can make his “move”, Superman shows up and is not pleased with what he finds.

The last few pages have a running monologue of Grail to her mother explaining what she has gone through to attain her “tool of vengeance”. While she speaks we see a number of events unfold such as Wonder Woman fighting Superman, the team arriving at Belle Reve, Flash internally battling the Black Racer, and Lex commanding parademons.

The finale of the issue shows the Anti-Life equation leave the Anti-Monitor and become possessed by Grail as she is dubbed the “Goddess of Anti-Life”.

Unfortunately, after a two month-hiatus, this issue did not come back with a “bang” by any means. That being said, it was by no means a bad issue but I thought we might get something bigger happening in this issue given the wait since October. This week’s story served more as filler than anything else. The issue delved into certain relationships among the heroes as well as moved the plot along.

The relationship portion of the issue had a very “CW” feel to it with the one couple flaunting their love and another couple awkwardly trying to deal with their own history while a jealous third wheel enters the mix. Most issues don’t lend themselves to exploring relationships on this level given time constraints, especially when it centers on a team like the Justice League. However, I am sure I will look back and see this as an acceptable point in the story to discuss the various relationships.

After the whole love triangle part of the story, my only other “complaint” was the confusing ending of the Anti-Monitor separating from the Anti-Life Equation. I could not understand why he would just give it to Grail. This was such a major weapon of his that helped him kill Darkseid. I am sure this will be explained later but, for now, I am just a little confused.

Despite a few negatives in the issue, there were still positives to take away. The artwork was fantastic as always. I’m enjoying Manapul’s art while he is filling in for Jason Fabok. I still love Fabok’s artwork and can’t wait for his return to the book but Manapul is a great substitute. His design of certain characters, especially New Gods, feels like a modern take on the Kirby characters but still very much paying homage to Kirby’s artwork. Johns adds to the artwork by writing New God characters like Mister Miracle and Barda very well. I am looking forward to seeing more of them in this story as well as other characters from New Genesis and Apokolips.

Overall, another good issue but not quite the big return I was expecting. Still, with the relationship and character development, this issue will hopefully be seen in hindsight as a good point in the arc to slow down a little and expand on those story points. I am excited for the return of the members of the Crime Syndicate. Forever Evil was a fun arc and getting some of those characters back will be a welcomed addition to this story.