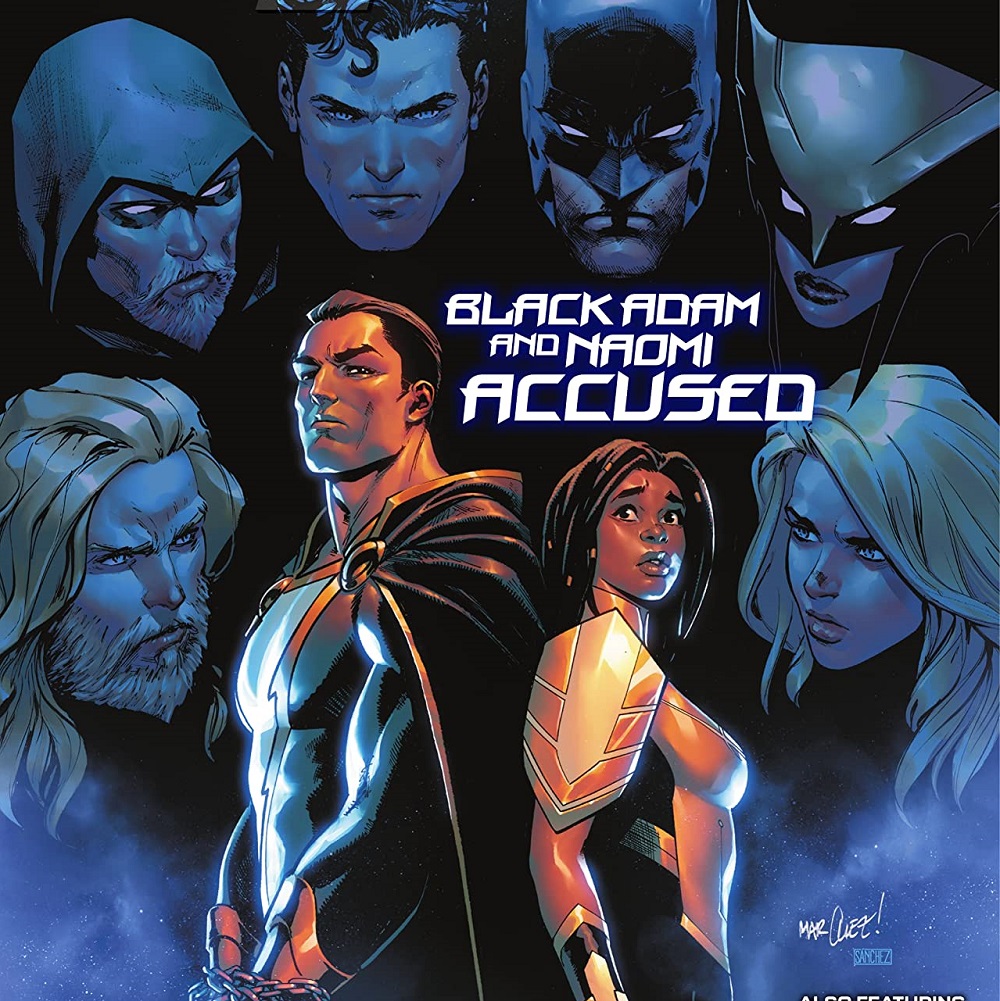 Overview: In Justice League #63, the Prisms arc wraps up as Naomi and the Justice League face off against Zumbado, warlord of Naomi’s birth world! In the Justice League Dark backup, reality unfolds as John Constantine and the team continue to track Merlin, Elnara follows the voice in her head into the house of God, and with Man-Bat’s help, Khalid Nassour attempts to revive the helmet of Nabu.

Synopsis: As Justice League #63 begins, Naomi McDuffie awakens with a start in a medical bay, safely back on her adopted homeworld, our main continuity Earth. Black Canary is at her side, and asks her what has happened.

Rewinding back to the events directly after the previous issue, Zumbado had arrived on the scene. Naomi recognizing him as the murderer of her birth parents, she leaps into action to attack him. At the same time, the Nth metal in Hawkgirl’s mace also responds to his presence, surging with dark electricity. Together with Hawkgirl, Naomi manages to land a staggering hit against the world’s warlord. The rest of the Justice League take advantage of the opportunity and mount an assault on the stunned Zumbado.

The Flash, having opened the portal leading back to our homeworld, desperately pleads for everyone to go through before he loses control of it. Black Adam takes one last mighty jab at Brutus before rejoining the others. Before long, Zumbado is back on the prowl, and making a beeline towards Naomi, but Black Canary blasts him with a canary cry, affording everyone enough time to make their way through.

We now hop forward to the present, with the Justice League entering with promising words that Naomi will be able to return to her birth world at some point when they have more knowledge and are better equipped to handle the fights ahead. At least for now, any return trips from Brutus or Zumbado to Earth are impossible, as Batman had stolen the tech through which the alien would-be invaders used to cross over.

Above the Hall of Justice, Black Adam is approached by Superman, who offers the King of Kahndaq a place in the Justice League, which he seems to accept after Kal-El inspires hope in him.

As the day closes, Naomi apologizes to everyone for her lack of control, which the team dismisses as one of the many parts of the life and welcomes her in as the newest member of the Justice League.

Analysis: The main story wraps up in Justice League #63 with a narrative that, as has been the case this entire arc, is pretty straightforward. The victory here, however, doesn’t seem to be of a moral virtue. The Justice League members are barely in control of their own powers, and the ‘defeat’ of Zumbado and Brutus seem to be the result of chance over anything. Everyone pretty much manages to escape by the skin of their teeth, and it’s only because of Batman’s theft of alien portal tech that the League and the Earth can rest easy for a bit.

Perhaps the conceit of the story is to be found with Naomi. This arc began with the League’s desire to connect to humanity a bit more and to integrate themselves more with the very real concerns of the general population. Naomi McDuffie begins her story already superpowered, to be sure, but still very much a young girl living in a small town. As with everyone else in her point of view, the Justice League is still a pantheon of near-perfect beings and, despite already having been by the side of the League and even Young Justice, she feels somewhat beneath them. By the end of the arc, however, she has been accepted as the newest member of the League, with the knowledge that she’s fit to be by their side not just because of her powerset, but because of her essentials. She beats herself up over having lost control of herself in the presence of Zumbado, but the League teaches her that humanity is not something to be judged, but to be supported.

Synopsis: In Justice League Dark backup of Justice League #63, the Man of Books has answered John Constantine’s questions, and the JLD is once again on the trail of Merlin. Constantine manages to skip ahead using a spell which breaks Merlin’s own by literally writing themselves out of it. However, they’re still not much further on with developing a plan. Jason Blood has an idea to use something that can tell them what their adversary will do before it happens.

That idea leads us to the Tower of Fate, where the newest avatar, Khalid Nassour, and Man-Bat (Kirk Langstrom) are trying to revive the helmet of Nabu using Langstrom’s expertise. His methods aren’t guaranteed, however, and when Nassour puts on the helm he is only for a short time treated with the magic. He receives three visions: one where he approaches a ziggurat in Ur, one where he sees the Tower of Fate fall, and the third is of a temporally-displaced woman entering a cathedral.

We follow this third vision to Gotham City, and the woman is Elnara, the thirteenth warrior we’ve been following in this arc. She is still following the voice in her head, which has led her here. Upon entering she discovers a cult that has taken hostage the person to whom the voice in her head belongs to. The leader of this cult orders her to be taken out and the cathedral burned. She quickly shows that she’s someone to be reckoned with, however, and prepares herself for battle. As she begins to defend herself, we see that this scene is being watched by a familiar figure up in the shadows: Batman!

Analysis: In Justice League Dark, Ram V adds more elements to the story while keeping the main plot of tracking Merlin plodding along. V is clearly enjoying the freedom of playing with different elements of storytelling, as is evidenced in the Looney Tunes-esque method of metanarrative that Constantine uses in order to break Merlin’s spell. The concept of using your own text as the text of one of the characters you’re writing in order to break a spell in a fiction that also posits that its antagonist has made yet another fiction into its own reality is pretty mind-bending. Throw into that the injection of Doctor Fate into the story and you have not one, but two potential dei-ex-machina.

In the limited amount of pages he works with, he is able to tell two additional integrating and intriguing stories. Elnara, a true believer, heeds a literal call and now seeks to fend off a sect of assassins that are at least reminiscent of the Order of Saint Dumas, fulfilling her role as a holy knight herself.

The introductory arc comes to a lackluster close, and its ending seemed a bit abrupt, with a tone that was concrete while the action itself was shaky in its progression, surpassed only by the artwork which colorfully reflected the broadness of the narrative. The backup story, however, is as strong in contrast. The main objective of the story seems to be dragging a little, but there are multiple elements at work that serves to support the long con of the JLD's chase of Merlin and add enough action and intrigue to keep the reader interested.