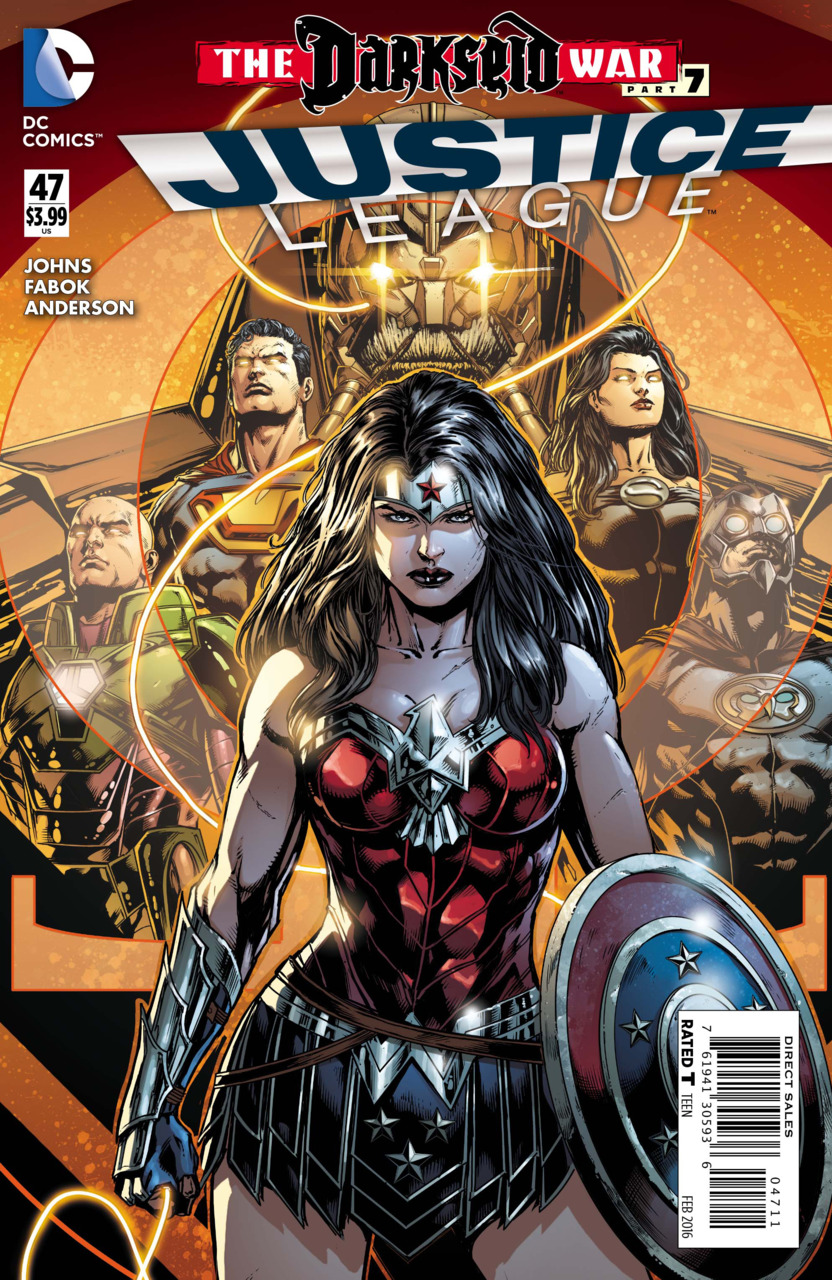 With a monologue describing her past with Superman, Wonder Woman is shown fighting off Superman. He has now been changed into the New God of Strength after being charged with energy from the solar pits on Apokolips. Wonder Woman manages to get her lasso around him and tells him that he needs her help.

At Belle Reve prison, Cyborg and Mister Miracle are breaking in so that they may use the Crime Syndicate’s knowledge of the Anti-Monitor to defeat him. With the help of Scot’s wife, Barda, they are able to break in and get past the guards to both Superwoman and Ultraman. Both doppelgangers have been imprisoned since their attempt at killing the Justice League. Ultraman is shown to be extremely weak without Kryptonite exposure and Superwoman is pregnant with Earth 3’s Alexander Luthor’s child. Ultraman already seems to know that the Anti-Monitor has come to this Earth and says that he is there to kill everyone and that is what he lives for.

Elsewhere, Grail is speaking with her mother and states that the Anti-Life equation has a secret that she will share with the world. First, though, Grail says she needs Steve Trevor.

Back at Belle Reve prison, Power Ring’s ring is becoming excited that they are about to release Superwoman. She raises her concerns to Cyborg but he insists that they need their help. The ring, Volthoom, then takes over Jessica’s body and tells him that it is time to reunite the Crime Syndicate.

Returning to Wonder Woman, she uses the lasso to bring Superman to his senses and remember that he is Clark Kent at his core. Batman and Green Lantern arrive as Superman regains his control. Batman informs the group that, although seemingly back to normal, Superman’s cellular structure is breaking down under the stress of the increased power levels from the solar pits and that he is dying. Batman informs the team that they need to regroup as his chair alerts him to the return of Mobius. He has emerged from his bubble of shadow demons and is now looking to be at full power.

In Belle Reve, Cyborg attempts to hack into Volthoom’s ring and bring back Jessica. Volthoom manages to override Cyborg and bring back the villain Grid. Before Superwoman tries to kill Scot and Barda, Owlman appears and tells her that they will need to work with the Justice League in order to survive.

Another good issue from Johns and Fabok. I really felt like they got the ball rolling again with this issue. We get the reforming of the Crime Syndicate and the set up from both Batman and Owlman that their two forces will need to regroup and combine to take on the Anti-Monitor. I have said before that the Forever Evil story arc has been a favorite of mine since the New 52 started. So getting the Crime Syndicate, especially Owlman, back on the pages of Justice League was a nice ending to the issue.

I did have one minor problem with this issue. I was not a fan of Cyborg becoming Grid again. I was hoping for something along the lines of Grid being formed out of a Mother Box. Having Cyborg overridden into Grid just seems like they are going back to an old plot point instead of coming up with something new.

With Fabok back, the artwork was amazing and it was great getting his style back after a few issue break. His take on the Crime Syndicate was very cool and I especially like his Owlman. His attention to detail on his armor just really feels like I am looking at Batman’s true doppelganger. Overall, his artwork on the issue brings back the cinematic quality that started this arc of heroes and gods.

Johns delivers on writing again here despite the minor issues and gets “Act III” of Darkseid War off on the right foot. Although Darkseid War has now become a larger scale Forever Evil arc with heroes and villains teaming up again, I am not definitely not disappointed and can’t wait for the coming battles. Since some of our heroes are New Gods now, I am looking forward to seeing their interactions with the Crime Syndicate. Johns has set the stage for a very epic showdown between the Justice League/Crime Syndicate and the fully charged Anti-Monitor.