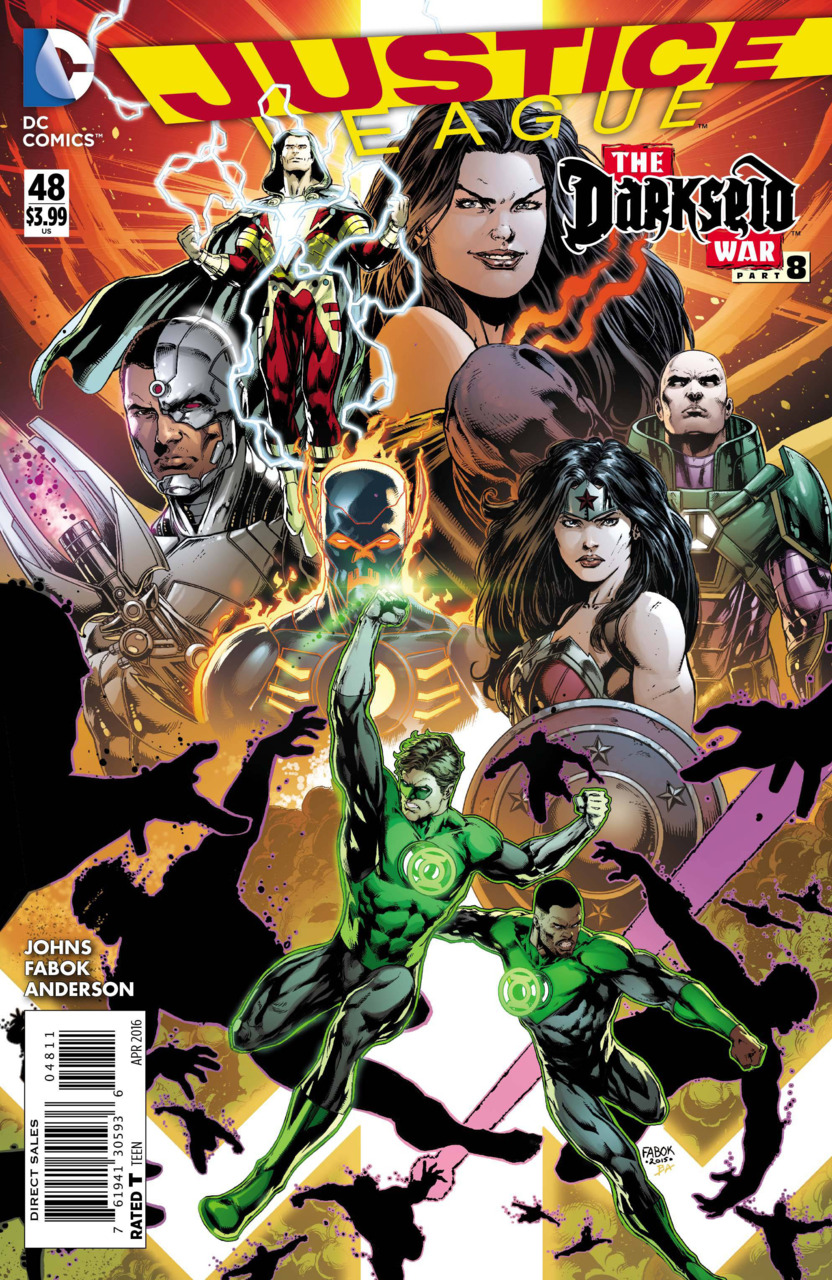 Synopsis: In the Lexcorp building, the Justice League tries to determine if joining Owlman and the Crime Syndicate is the best approach in defeating the Anti-Monitor. Adding to the tension, the newly formed Crime Syndicate has taken over the bodies of Power Ring and Cyborg to bring out the villains Volthoom and Grid. Despite Wonder Woman’s attempts to bargain for her teammates’ lives, Owlman refuses to let them go until Mobius is destroyed. He lets Wonder Woman know that the Crime Syndicate is there for revenge and not to just save the Justice League’s world. Wonder Woman agrees to the terms and allows Ultraman to consume a massive chunk of Kryptonite they had taken from Lexcorp.

The group arrives in Gotham City as the citizens are being attacked by the shadow demons of Mobius. After rescuing some civilians, Mobius enters the battle and brings Batman down. As Batman is on the ground, Mobius demands the return of his chair and that Batman never even understood its “true purpose”. Green Lantern, although wanting to remove Batman from the Mobius Chair as well, stops the Anti-Monitor with the help of Power Ring. Even with their combined power they are close to being overrun when a force of Green Lanterns comes in to reinforce them and provide some much needed backup.

Mobius next battles both Wonder Woman and Superwoman. Neither woman can subdue him. While he deals with them, Grail teleports Steve Trevor away from the others to help her accomplish some unknown goal. Superman and Ultraman then take a shot at Mobius. Although, Ultraman decides he can take care of it solo as he knocks Superman out of the city. Ultraman appears to have the upper hand but Mobius hits him with an energy blast and gets on top of him where he proceeds to disintegrate Ultraman. Ultraman pleads to Flash for help but Flash, still host to the Black Racer, is unable to move in the presence of Death.

The issue concludes with Mobius standing over the remains of Ultraman asking who will be next to which a boom tube opens and Lex Luthor, God of Apokolips, lands with an army of parademons ready to take on the Anti-Monitor.

Thoughts: Even though we have had great writing and artwork previously in this arc, this was probably my favorite issue thus far. Johns continues to showcase Wonder Woman in this arc. Her inner monologue has become an aspect of this story that I look forward to with each issue and her growth as leader of the League is not only refreshing but fitting given the events of this story.

I was really looking forward to the Crime Syndicate back in action and this issue certainly did not disappoint. The death of Ultraman seemed a little telegraphed at one point but his last fight was quite the showdown. I hope we find out in the next issue what plan Owlman had for defeating Mobius and if it still is a viable option now that Ultraman is dead.  One thing that Johns does well is plant subtle plot points amongst all the bombastic storytelling that comes out later so between Batman in the Mobius Char or Grail’s kidnapping of Steve Trevor, there are a lot of moving pieces and it definitely keeps me as the reader guessing as to where the story will go.

With regard to the art, I feel it is impossible to find any negatives here. Fabok delivered an incredible issue that was packed with epic fight scenes and intense moments only heightened by great detail in characters’ facial expressions (poor Ultraman…). Of course, credit is also due to colorist Brad Anderson who only helped to elevate every page of Fabok’s artwork.

Now that it is public that Geoff Johns and Jason Fabok are leaving the title, I’m sure we are going to get something really special here in these last two issues. In just this issue alone, we got to see the Green Lantern Corp, Justice League/Crime Syndicate team-ups, and Lex Luthor’s parademon army…definitely feels like the creative team is pulling out all the stops as they near the conclusion to their last arc. At this point, I could not be happier and can’t wait for next month.