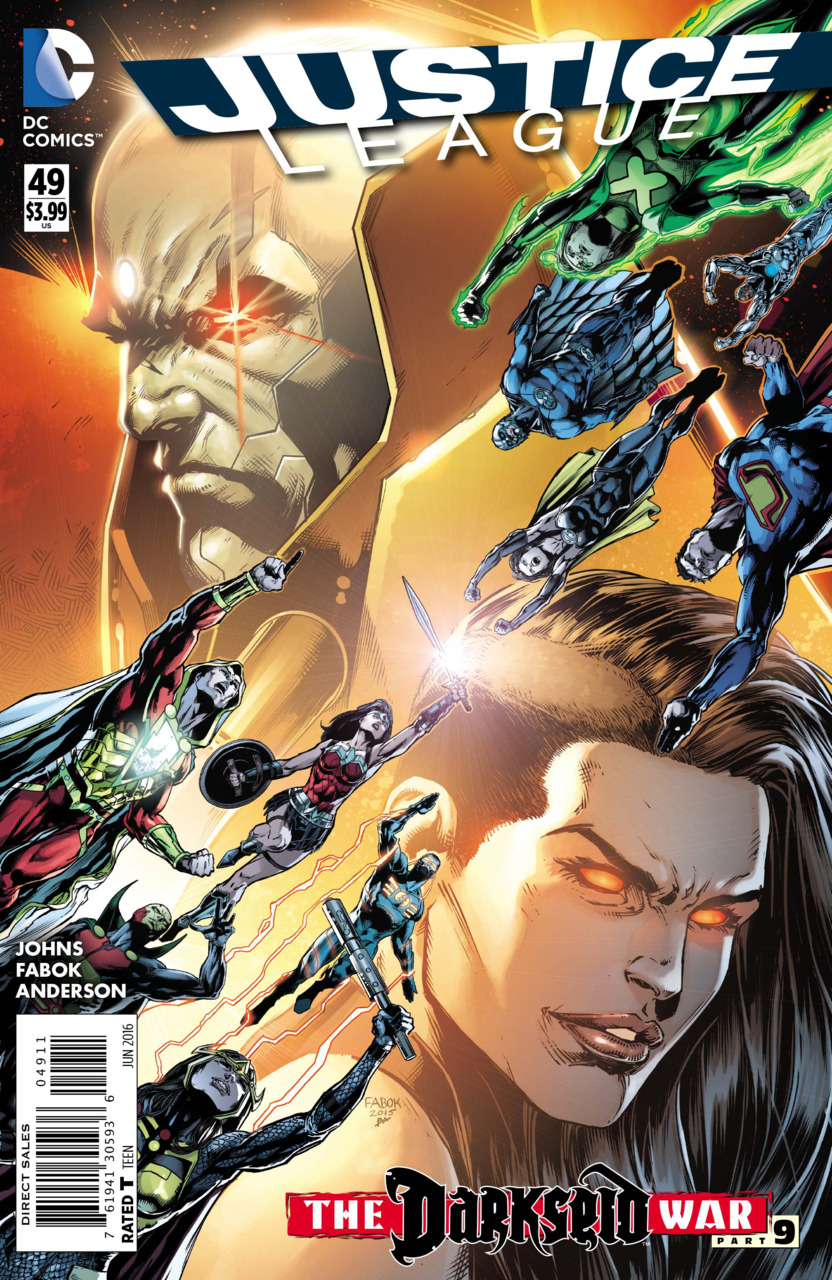 Synopsis: This issue opens with the continuation of the fight between Lex Luthor, God of Apokolips now with the power of the Omega Effect, and Mobius. As the two godlike beings battle, the Justice League and the Crime Syndicate look on as Superwoman goes into labor. Wonder Woman tries to remove Superwoman and her unborn child from the battlefield but Owlman refuses by saying that this was all part of his plan. After Wonder Woman demands to know what the Syndicate’s plan is, Batman, with the power of the Mobius Chair, reveals that Superwoman’s baby is the great weapon that Owlman plans to use. Volthoom, aka Power Ring, states that the baby will help them take out Mobius and then the Justice League.

Inside the ring of Volthoom, Jessica Cruz and Cyborg fight together to try and regain control of their bodies after being taken over by Volthoom and Grid.

Back on the streets of Gotham, Mister Miracle and Barda debate on the best way to help. Scot wants to help the League take down Mobius while his wife, Barda, feels it would be best to free the slaves on Apokolips now that Darkseid is dead and Luthor is on Earth. Scot says that if they help the League now, then the team will return the favor. Unconvinced, Barda uses a boom tube to leave much to the surprise of Scot.

When Lex is attacked by a horde of Mobius’ shadow demons, the Trinity take the offensive against Mobius. With Batman calling out Mobius’ every future move, Superman is able to take down Mobius long enough to direct his absorbed Apokoliptan solar energy at Mobius. After the energy blast clears the area. Lex stands over Superman and wonders why he ever held back when he had so much power. Flash warns them all that Death is coming. With a furious cry, Mobius leaps out and begins to kill Lex.

Before Mobius kills Lex, a boom tube opens and Grail steps out with her mother and Steve Trevor. This arrival is also accompanied by the birth of Superwoman’s son. With both arrivals, Flash warns them all that they should run. Grail tells Steve, now infused with the Anti-Life Equation, to kill Mobius. Despite fighting against Grail’s control, Steve unleashes an energy beam from his eyes and disintegrates Mobius. The issue ends with Grail about to turn Steve against the entire Justice League.

Thoughts: As much as I have been loving this arc of Justice League, I actually felt that this issue left me a little underwhelmed. With the closing of Johns and Fabok’s run, I was hoping for more suspense to build in this issue. I understand that a lot happened within it, but it just did not have the emotional impact I was hoping I would get. Each issue of Darkseid War has left me hanging on the edge of my seat just waiting to see what will happen next month. This one ended and left me hoping that issue #50 will make a strong comeback.

Now, like I said earlier, a lot happened in this issue. We get to see the birth of Superwoman’s son and the death of Mobius as well as Superman seemingly becoming himself again. These plot points certainly keep the story moving forward. For me, I was not as thrilled to see Mobius die here at the hands of Steve Trevor. It will probably get explained but I still don’t understand why he gave up the Anti-Life Equation. It was the one thing that brought down Darkseid so why would he not want it to use against his enemies? The moment just did not have the impact I think it was meant to have. I actually found myself feeling more suspense towards the birth of Superwoman’s child. Whether or not the father is Mazahs from Earth 3, I am much more interested as to how he will factor into the story.

The artwork was stellar as usual with Fabok creating tension left and right. His line work on characters’ facial expressions and body language just delivered a range of emotions throughout the issue such as the clear physical pain on Superwoman’s face during birth as well as the heart broken look of Scot Free realizing Barda had left him. Johns’ writing really complemented the artwork in this issue to bring each panel to life.

Overall, it was not a bad issue, but just did not impact me the way I was hoping. I admit I have high expectations every time I pick this title up…I blame Johns’ great writing and Fabok’s fantastic art. But seriously, I am still very excited for next month’s issue as always and am dying to know how Darkseid War will end.