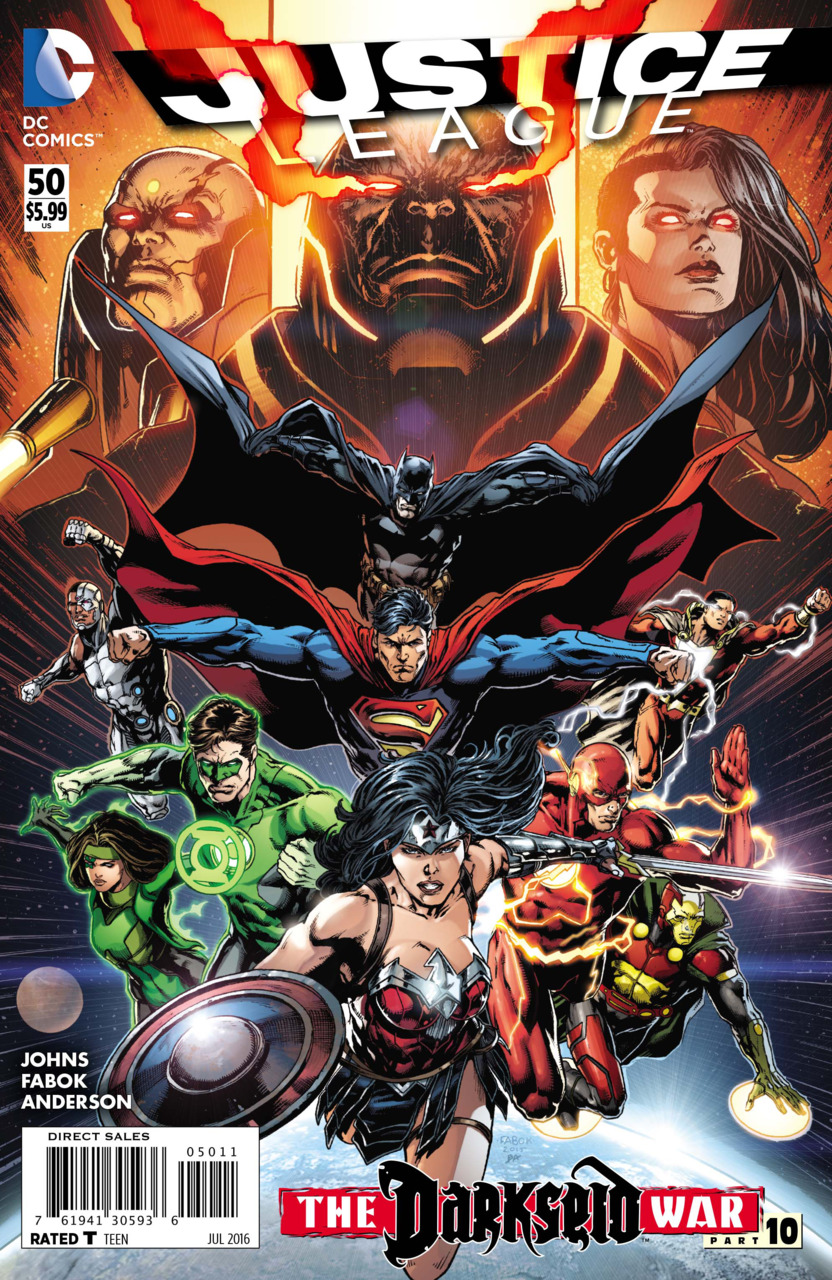 Synopsis: The issue starts with a quick recap of Darkseid War and how Darkseid was destroyed and certain members of the Justice League became gods. Wonder Woman states that she believed they would destroy the Anti-Monitor, but Grail destroyed Mobius and created a new god with Steve Trevor. Now, Steve Trevor has been turned on Diana and the League. As he tries to kill Diana as commanded by Grail, Steve has moments of clarity where he asks Diana to stop him and tries to fight the Anti-Life Equation within him.

The League, meanwhile, attempts to take down Grail. We get an awesome few panels of Mister Miracle escaping Grail’s hold with some witty banter while Batman sums up her increasing obsession with power. Just as Scot escapes Grail, members of the Green Lantern Corps arrive and attempt to cage her. She breaks through fairly quickly. Steve asks to be killed and Luthor attempts to fulfill that request but Superman stops him.

Close by, Superwoman reveals that her child is the son of Mazahs. She begins to use the baby to take all the god-like abilities of certain League members like Luthor and Superman. Superwoman does not get to enjoy the moment long as she is incinerated with a blast from Grail’s eyes. Grail then reveals to her mother that she will use the baby and continues to have the baby absorb the abilities of the gods. She separates the Black Racer from Flash which only leads to the Black Racer seeking a death.

Inside Power Ring, Jessica and Cyborg get one chance for her to take back her body. She assumes command of her body and uses that brief moment to sacrifice herself to save the Flash from the Black Racer.

The League is only allowed a moment to mourn before charging as one against Grail and Steve Trevor. Batman reveals that Steve Trevor was not the first man to step foot on Themyscira which is why he is able to resist the Anti-Life Equation. With that new information, Grail takes the Anti-Life Equation from Steve and infuses it into the baby to become the new Darkseid who is slave to Grail due to an ancient Amazonian ritual.

Batman tries to extract more information from the Mobius chair but it is clearly killing him. Hal gives Bruce his ring so that he can will himself out of the chair. With the help of the ring, Batman is able to leave the Mobius chair. Just as Grail is about to kill Hal, Barda and her Furies show up to stop the “desecration” of Darkseid. Diana realizes that Darkseid is connected to Grail like a puppet. With the distraction from Barda, Owlman and Grid take the Mobius Chair and disappear.

Myrina then enters the fray and fights Grail only to sacrifice herself once it is revealed by Batman that Grail can disperse the Anti-Life Equation. As Grail’s energy blasts pass through her mother, they hit Darkseid and separate him from the Anti-Life Equation. In the explosion, Grail disappears with the baby who is now Darkseid.

The issue wraps up with many character’s paths teased for the future. Jessica Cruz is resurrected as a Green Lantern while Superman is told he is, in fact, dying. Mister Miracle and Barda must separate as the agreement for the Furies’ help was for Barda to return to Apokolips. Lex returns to rule Apokolips all while wearing the Superman emblem. Batman learns from the Mobius chair that there were, in fact, three Jokers. Wonder Woman is shown by the sea and revealing that she was told by Myrina that she is a twin and that her brother may be out in the world still.

The issue ends with Owlman and Grid freeing Metron. The meet up is interrupted when Owlman is told by the chair that “he is here” and all three of them are destroyed with a “to be continued” in Rebirth.

Thoughts: Having eagerly waited for the conclusion of Darkseid War, I think I may have had my expectations set too high. Although this was a great issue, I did not feel it provided the satisfying conclusion that this story was leading towards. There were a few reasons why this did not feel like a solid ending, in my opinion, but the issue did tease a lot of stuff that will be coming in Rebirth,
which, I think, was the problem here. It seemed like Johns had to wrap up his big story but not actually give endings to any one particular character’s story.

One of my largest concerns going in to this issue was the fact that the Anti-Monitor had been destroyed by Steve Trevor in the previous issue. It had happened so quickly that in this issue I felt that his death was pretty anti-climactic. With Superwoman’s baby also being pulled into the climax it just felt like the rhythm of the story was missing.

Regarding Superwoman’s baby, I was definitely confused, and a little grossed out, when Darkseid’s soul infused with the child. I never really liked the idea of Darkseid inhabiting a person, as he did in Final Crisis. Having it happen here felt off and out of place. Shazam’s question of being “punked” did feel spot on here.

The high point of this issue still remains the artwork from Jason Fabok. With this issue showing many panels of a character’s facial expression, there can be more risk for showing errors with that big spotlight on something like that. Fabok succeeded with flying colors. So many panels featured the intense emotions that Johns was conveying through the writing and it just reinforces the fact that these two are such a great creative team. Additionally, this issue featured full fight sequences very similar to the beginning of this arc. Things can get messy with so many characters flying around and energy blasts shooting this way and that. However, Fabok gave each hero and villain in these panels such attention that their personality or signature moves were captured perfectly. And on top of all these awesome panels, we get Green Lantern Batman which was very fun to see.

Even with the some of the issues I had with the ending, I still very much enjoyed Johns’ writing and storytelling here. I really like he pairs Wonder Woman’s inner dialogue with what is happening in the story. My favorite part was the final charge from the Justice League to defeat Grail and the following panels featuring certain particular characters that represent why the League members are not gods. You would think it would be negative to downplay their power but Diana lists off reasons why they are much better off not being gods with the ability to love, intervene, etc.

Overall, the issue was great, but as the ending to Darkseid War, I thought it could have been stronger. There seemed to be such a motivation to set up all these characters’ paths in Rebirth that they did not focus enough on the actual story that they had built up.