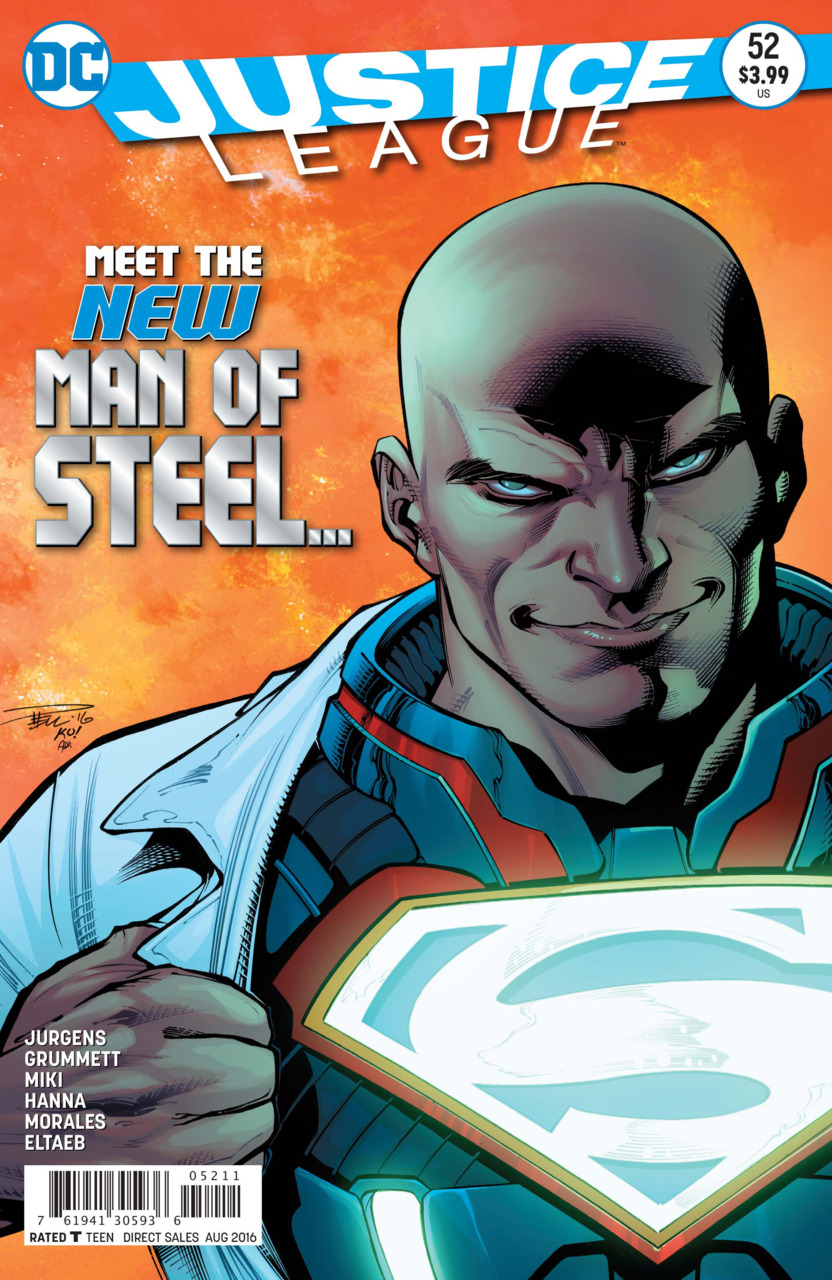 Synopsis: The final issue of the Justice League in the New 52 opens in the Daily Planet with a shot of Superman’s cape. Lex Luthor is standing before it and is told by two security guards that the memorial’s viewing hours are not open until the next day. He begins to argue with them and then Perry White appears and begins to tell Lex how Superman had no family so they are honoring both Clark Kent and Superman with the memorial being held at the Daily Planet.

The Justice League then shows up and states that Lex is “back”. There is not a time gap explained here but it is a reminder that Lex went back to Apokolips to “rule” now that Darkseid is gone. The team questions why Lex’s new battlesuit bears Superman’s “S” shield on the front. He thinks of the “S” as a memorial to the fallen Superman. He asks them how Clark died and Diana begins to explain before Batman cutting her off and stating that the fight was too much for him and he died. As Lex leaves concluding that Metropolis is now without a champion, Diana asks Batman if they should have told him about the other Superman. He answers no and that they will tell them when the “new” Superman is ready to go public.

The rest of the issue is Lex flying around Metropolis and stopping various crimes such as a bank robbery and a hostage situation that takes place afterwards. While this is happening, Lex’s narration is directed towards his comatose sister and he explains how ironic it is that he can fix so much with his new Apokoliptian technology but can still not wake her up.

The next morning, Lex purchases the Daily Planet, to Perry White’s surprise. His first action as owner is to have the cape of Superman given to him. Perry reluctantly gives it to him and Lex takes it to the roof of the Daily Planet where he attaches it to his suit. Lex ends the issue with telling his sister that she will be proud of him as the new champion of Metropolis…the new Superman.

Thoughts: Disappointing was the only thing that came to mind after reading this issue. After last issue’s odd story taking place five years ago, I really was hoping for a nice ending to this overall pretty great run on Justice League within the New 52. What I got was basically a set up story for a Superman title. As just a standalone, character building issue for Lex Luthor, I enjoyed it.

Not really knowing where they will take the Justice League after Rebirth, I thought this was going to be a transition into having Lex take more of a leadership role going forward. Instead, we just got a setup into making him Superman of Metropolis and pretty much removed from the Justice League. I feel like this was a missed opportunity. Even if it was just for a one-shot of Lex taking command, it could have been entertaining and showcased Lex’s more “heroic” qualities that would make it feel more realistic for him to take on the name “Superman”.

Like I said earlier, as a standalone Lex story, I did enjoy this issue. It had some nice moments that helped to humanize Lex. The irony and tragedy of his situation makes for an interesting arc that hopefully we will see play out in the Superman titles in the future. I thought the artwork by Grummet was fine but did not really keep me engaged in the story. In regards to the one page of the Justice League, I really thought it was too “cartoony” and somewhat forgettable, especially after seeing Fabok’s and Manapul’s artwork from Darkseid War this past year.

Overall, I just really am surprised that DC let this one slip away. Justice League was consistently one of the few good titles during the New 52 and to have it end this way after some really great stories is a big letdown for me. Again, it was a nice Lex Luthor story but his name is not on the title. Hopefully, the new creative team coming up will have some really great arcs to start off this rebirth for DC.