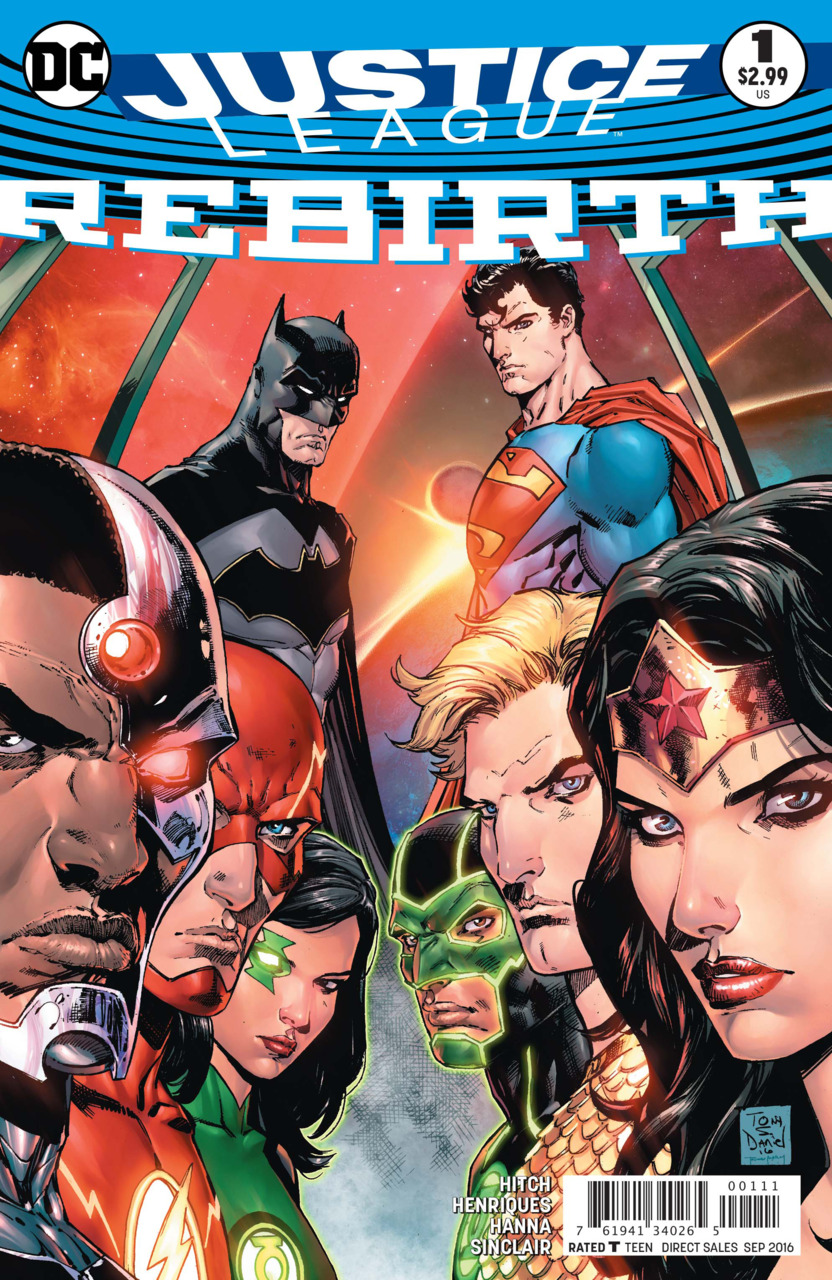 The story opens with a giant space lobster looming over New York City, with smaller space lobsters attacking people in the street and taking over their bodies. In the middle of it all is the Justice League (Batman, Aquaman, Flash, Cyborg and Wonder Woman).  At the same time Clark Kent is at the farm house watching his son play while taking with Lois about if being on this new world has some meaning and wondering if he should join the Justice League. The Justice League continues to fight the space lobster, which reveals itself to be a race of beings called “Reapers” who have decided that humanity has had its day and it’s time to show mercy by destroying mankind. Intercut is a flashback where the League is morning the death of their Superman while wondering if this new Superman can be trusted. The Justice League decide for some reason they have to crawl into the alien’s brain and…negotiate with it.  By the end of the issue Superman has joined their ranks along with the two new Green Lanterns and they defeat the Reaper who leaves the earth, warning that a judgement is coming.

The story is a fairly standard set up for the new team.  The villain of the story isn’t particularly interesting or original. The “reapers”, not only looking like a cross between the giant whale creatures from the first Avengers movie and the feature tank at red lobster.  Not only is the name kind of terrible, it’s also a case where Hitch could have used an established villain like Starro the Conquerer and done the exact same story with a better villain.  There’s a moment where the team venture inside the alien to communicate with it which doesn’t really seem designed to do anything but give Superman something the punch through when he arrives to help the team.

On the plus side there are some nice character moments such as when Clark and Lois are talking about whether or not he should be this world’s Superman.  You never get the sense that he won’t end up putting on the cape but they are nice moments for those who missed the Lois and Clark relationship.  I for one think Superman just plain works better as a character being married to Lois as it grounds Superman nicely.  The two new Green Lanterns play well off of each other.  They aren’t really given a lot to do here other than talk about being new and show up when it’s convenient but their dialogue is well written.

Ok. Let’s talk about the art.  What happened Bryan?  Bryan Hitch has built a reputation going back to the Ultimates as someone who specializes in “wide screen action”.  The art in this case is lacking and not up to the standards Hitch has set for himself in previous work.  There is a weird lack of detail. It feels like they inked and colored Hitch’s thumb nails as opposed to a more polished product.  Maybe it’s a case of giving him too much to juggle as both the writer and artist. I think this book would do well to bring on a writer to let Hitch focus on the art.  Batman in particular doesn’t fair well here as drawn by Hitch.

On a side note, am I the only one who thinks the new costume for Batman only really works when it’s being drawn by Greg Capullo?  Other artists seem to ignore most of the design changes like the new cowl and belt design.  It will be interesting to see if DC continues with the design or if they go back to the New 52 design.

It’s not that this is a bad issue, but there’s a rushed quality to it, both in story and art.  You never get the feeling that there are any real stakes.  I’d imagine that Hitch was told that by page 20 the new team needs to be established.   There’s not enough time spent to set up, execute, and resolve the threat of this issue and it ends up feeling small which is not something you expect in an alien invasion story. I think if Hitch had gone with an established villain or threat it would have served better to set things up quickly and give a reason for Superman to come to the team.

Now that the Rebirth issue is done and over with, hopefully more time will be given to better craft the story. Or at the very least, a villain that doesn’t pair as well with a lemon butter sauce.