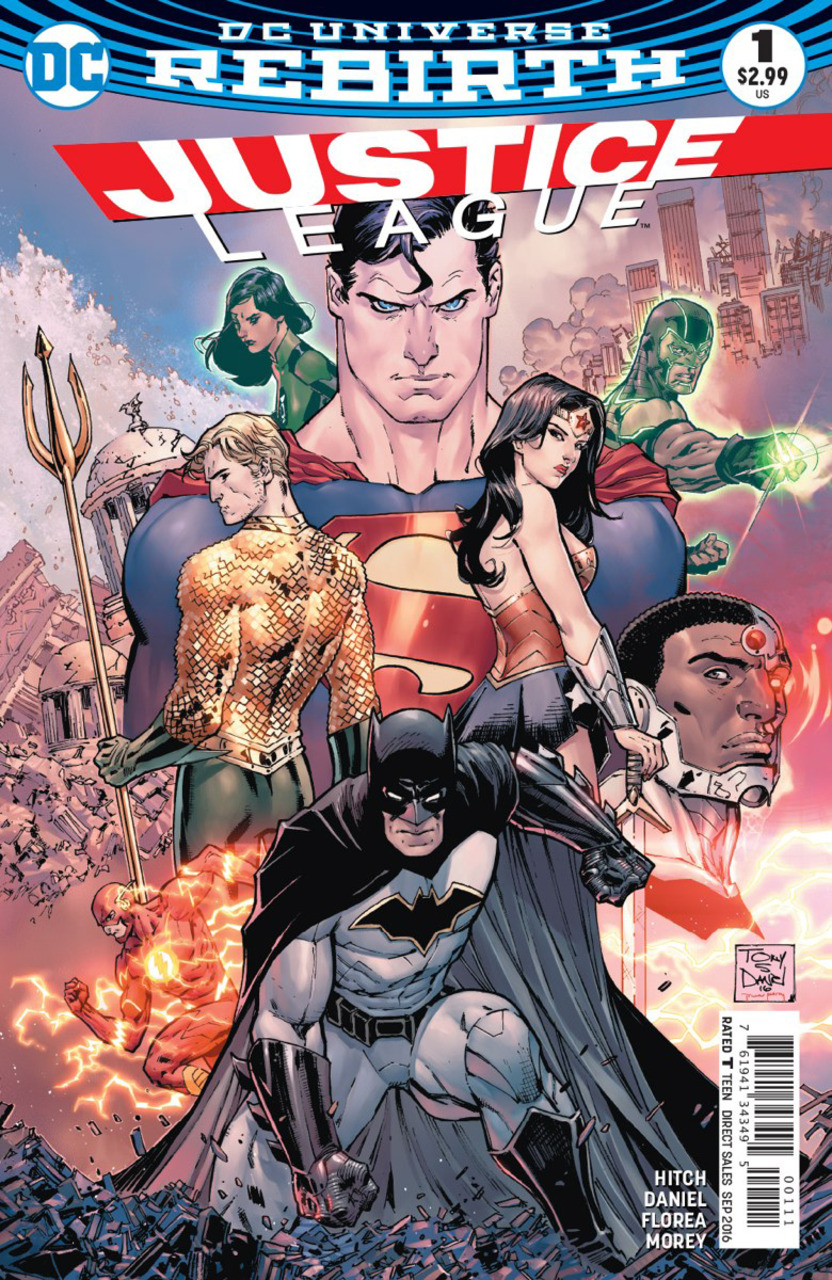 The issue opens with Wonder Woman fighting a Russian Militia on a battlefield.  The fighting is interrupted with buildings crumbling and tanks sailing through the air.  It cuts to a news report stating that global earthquakes are crumbling the worlds cities and the words “extinction-level event” are thrown around. Around the globe the Justice League are shown trying to contain the damage.  The new recruits, Green Lanterns Simon Baz and Jessica Cruz are paired up in Beijing. Cyborg is coordinating things from New York whiling sacking a runaway subway train while the Flash is in San Francisco saving people from the wreckage of the earthquakes. Aquaman is in Atlantis trying to contain the damage.  Superman makes an appearance saving people around the world and is seen through cellphone video as viewed by Cyborg.  One by one all the heroes are attacked by zombie-like living and dead members of the public who speak of something called the “Kindred” and the Leaguers are taken down one by one.  While all this is going on Batman speeds towards a crashed alien ship in Gotham which floods the streets with small insect like creatures which attack Batman.  The story then cuts back to Wonder Woman who fights off a hoard of zombies and let’s the “Kindred ” know that she’s coming for them.

After an uneven Rebirth issue, while not perfect there’s a lot to like in this issue. The art definitely takes a step up with Tony Daniel taking the reigns this issue.  The opening with Wonder Woman is like watching a bomb get dropped on the Militia men and it’s fun to watch an angry Wonder Woman cut loose.

Wonder Woman is the clear standout of this issue and book ends the action nicely.  The end of the story has a Wolverine rising from the sewer (the classic X-Men #131 for those playing along at home) quality to it and it’s nice to see Wonder Woman getting her due as a team power house.

The other leaguers don’t really get enough time to shine in the issue which suffers a little from the lack of set up. It’s like turning on a movie you’ve never seen in the middle of an action sequence.  It’s visually interesting but ultimately unrewarding and a little confusing.  Big moments tend to work better with little moments to give a sense of scale. I think this is a book that may benefit from reading as a collected edition.

The League being split up makes sense in terms of the story they are telling, but not having the League interact more causes the story to miss a lot of character moments. It would be far more interesting for the two Green Lanterns to be split up and paired with other Leaguers. Remember how fun it was to watch rookie Kyle Rayner stammer nervously when paired with Wonder Woman or Batman during Grant Morrison’s JLA?  It’s also a little convenient that the one member of the team that can’t help during an earthquake in any meaningful way, Batman, gets to deal with an alien insect invasion instead.

It’s far too early to tell if “The Kindred” will end up being a worthy villain.  The zombie attacks aren’t particularly interesting and so far only serves to let the Justice League know the name of the bad guys.  Hitch so far hasn’t show himself to be a particularly gifted writer at creating his own villains. Both Rao and The Reapers were boring copies of villains done better elsewhere.  Hitch has said publicly that he won’t be using any of the established villains which has me wondering why. It’s a decision that seems to fly in the face of the Rebirth mission statement of honour the legacy of the DCU.   I’m not against new villains in a comic by any means but if your going to take the time to create a new villain then it is on the creative team to come up with something interesting or different that hasn’t come before and that’s not something Hitch has shown is yet.

All in all this issue was a marked improvement on the previous issue despite some pacing issues and an as of yet uninteresting villain.