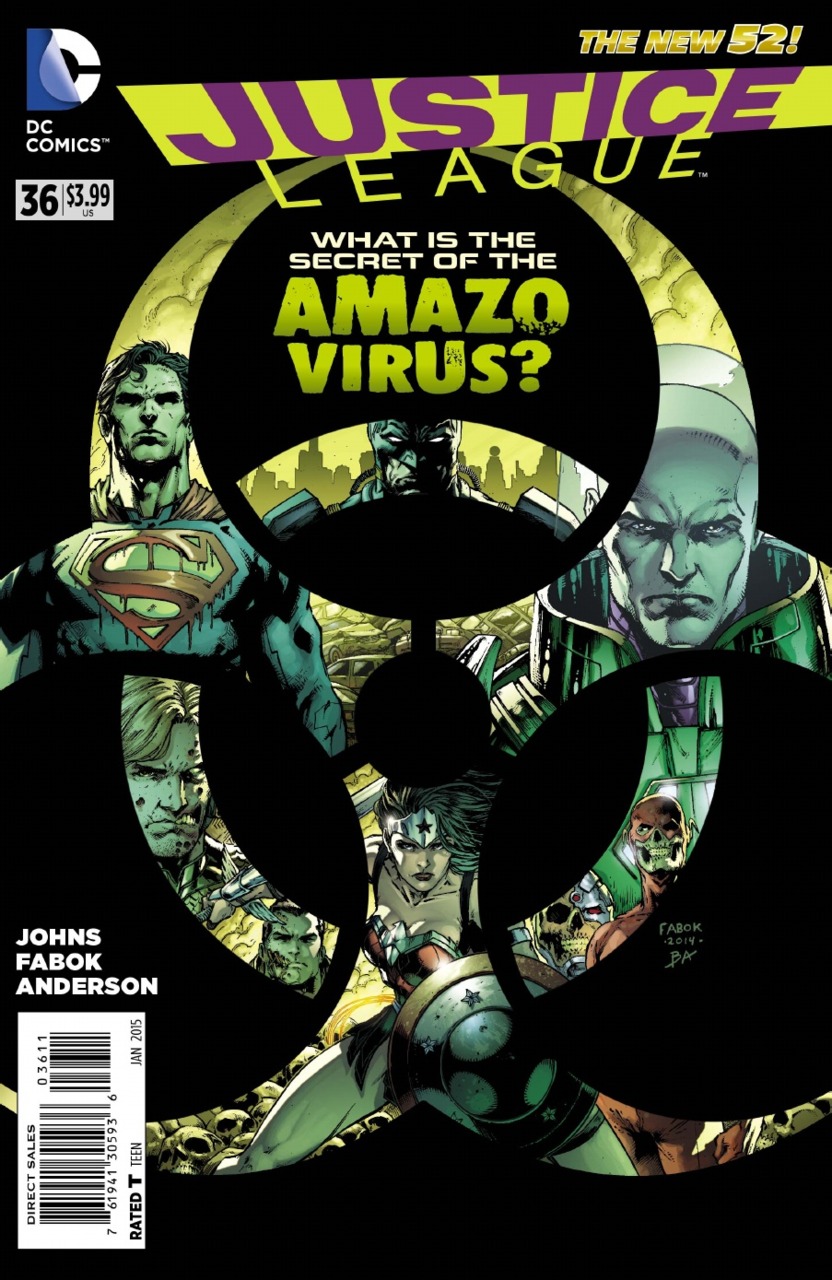 Now THIS is a creative team, kids. DC breaks out their big guns to take on their flagship team title, Justice League, featuring legendary scribe and DC’s very own Chief Creative Officer Geoff Johns and superstar artist Jason Fabok (of Detective Comics and Batman Eternal fame). Together, they bring us the first chapter in a brand new tale entitled “The Amazo Virus”. This particular installment is called simply, “Quarantined”.

The story opens on a scene that has become all-too familiar to any consumer of popular culture these days…the apocalypse. Destroyed cars piled up, the streets abandoned, money flying around a desolate landscape and of course, a lone teddy bear lying alone and unloved.

But this particular apocalypse isn’t of the zombie variety. It seems that the great city of Metropolis is now under quarantine due to a highly contagious virus that has swept through the city (and as it turns out has also affected New York, Boston and as far west as Central City).

I mentioned money, right? Yeah, that peaks the interest of a few already infected individuals who see this as an opportunity to stock up despite their sickly predicament. So, there on right in front of Lexcorp, they seize said opportunity.

Unbeknownst to them, they are being carefully watched by the World’s Finest superheroes, Superman and Batman. Now, this is where we’d usually expect to see a sweet Bat-beatdown. But in this case, our heroes seem to be a bit more cautious in their approach and we learn that Lex Luthor is somehow the cause of the virus itself.

As Batman and Superman reveal themselves to these infected individuals, they call for both their surrender and declare their desire to help. You can probably imagine which hero said which. We also discover that Batman (as always) is prepared for an airborne virus of this sort, rocking his very own Bat-HAZMAT suit.

And this is where we learn exactly what kind of virus we’re dealing with here. It seems the virus manifests itself within its’ hosts by giving said hosts some type of metahuman superpower. In this case, Bats and Supes face off against one who is capable of Pyrokinesis and another who can control gravity to the point of creating a black hole!

After dealing with these new metahumans, we are then taken to a remote base camp where all of the infected survivors are being held including the entire Justice League!! Well, almost all of the Justice League. Superman and Wonder Woman are not affected because the virus can only infect humans. And since WW and Supes aren’t…well, they’re just fine. And we know Bats is okay because he’s out on the streets with Superman. And we learn later that Lex actually saved him from exposure.

Lex Luthor himself is on the scene at the base camp along with Wonder Woman followed shortly by Colonel Steve Trevor and a HAZMAT team. It is here that we learn exactly how serious the virus is, where it came from and how it can be stopped. The Amazo Virus is what Lex called it and it was inadvertently released when Neutron (who is now infected) broke into Lexcorp attempting to kill Lex. He failed in his mission but managed to destroy the storage facility containing the virus.

The Amazo Virus was intended to be a means of suppressing the powers of violent and/or criminal metahumans by using an artificial enzyme that replicated that used by Professor Anthony Ivo’s Amazo android (who was able to mimic metahuman abilities for the uninformed). And do that it does. But what Lex wasn’t prepared for was the affect it would have when humans would be exposed. Humans will suffer through three stages. Stage 1 – flu like symptoms. Stage 2 – Metahuman ability. Stage 3 – Death. Really really bad death. Like cellular breakdown, black blood, bursting heart, boiling brain death.

Who can destroy this horrible virus?? What can destroy it?? Who can save the remaining survivors (including the Justice League!)? Well, naturally the creator himself of course…Lex Luthor.

There’s just a couple of problems. It seems there’s been a very sizable hit put on Lex Luthor’s head. Neutron was the first to try and cash in and the mysterious “Bullet” doesn’t seem to be far behind. So, now the United States government needs to keep Luthor alive to cure the virus. And Lex requires just one small thing…Patient Zero.

Guess who just stumbled on Patient Zero?? Batman and Superman.

All of this makes for a very intriguing first installment with gorgeous art by Fabok. Definitely check it out. And it’s a great jumping on point if you haven’t been reading Justice League for awhile.