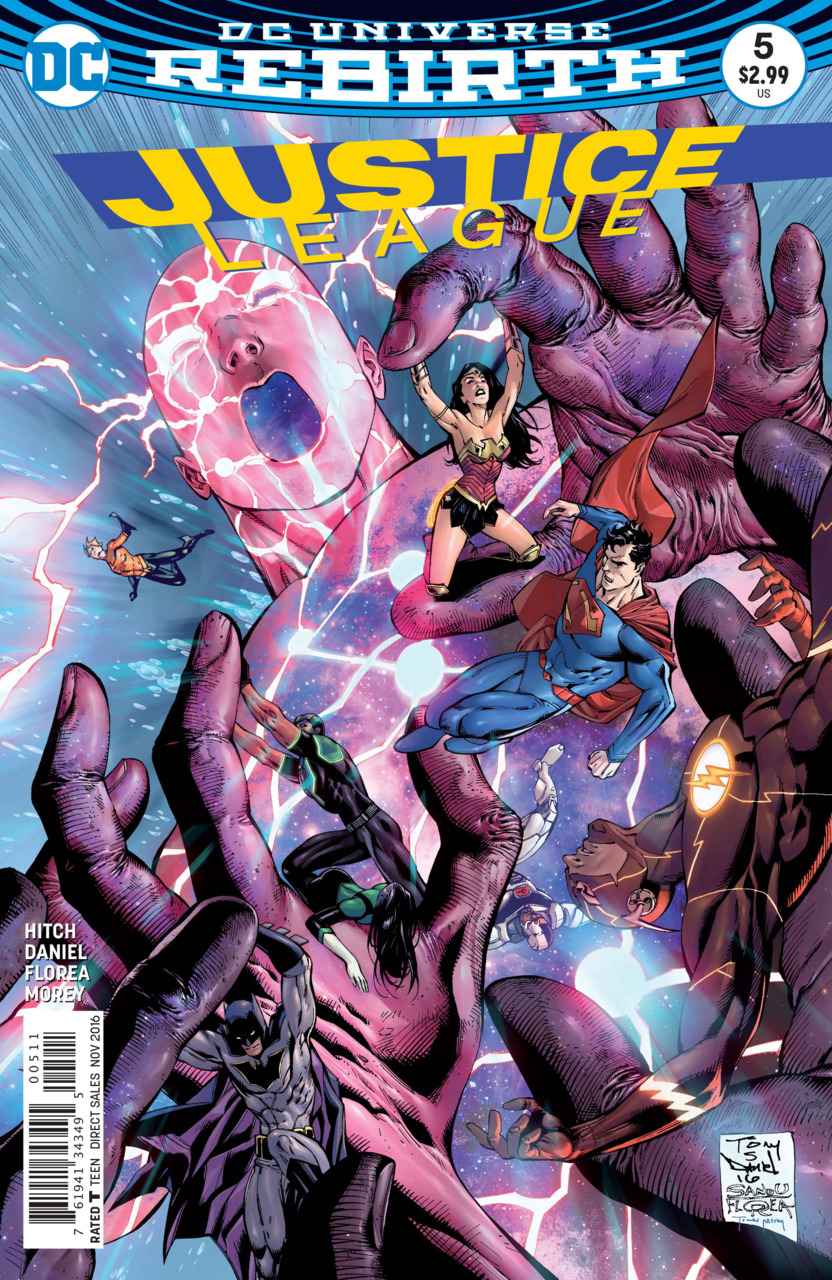 “The Extinction Machine” story line concludes with this issue. The issue opens with Aquaman on a mission to stop the world from being destroyed. He has a bag of magic crystals that are singing to him and telling him what to do. He believes them. He is to place the stones in four locations and they’ll will bind with the world and hold it strong.

At the Kent farm in Metropolis, Batman and Lois rush to Cyborg. He is overwhelmed, but believes that he is more than just connected with the purge. He believes that he is controlling it. In the other dimension, the Green Lanterns are able to contact Cyborg. They report that they are at the world where the missiles originated from. They found the inhabitants of this broken world and some of them look like Cyborg. Cyborg reports that Flash was in trouble. He too is able to join the conversation. Flash is alive and the flying things from the missiles have not attacked, but he is requesting backup. Batman and Cyborg boom tube out leaving Lois and Jon.

In the center of the earth, Superman continues his struggle. He has reached the second object and he is working to push it into the core as he did the first one. It blows after he pushes it into the inner core.

Batman and Cyborg find Flash. As they arrive, another quake hits. Flash is unable to run as his speed has been taken by the giant Kindred. Inside one of the beings, Wonder Woman continues her search for the truth. She can see the League gathering together and says that the Kindred’s time is over. She is able to escape the Kindred’s shoulder and joins the others. Diana reports that they are trying to awaken something that is being resisted by the Purge and the quakes.

Aquaman continues his mission by planting crystals in the second location. He can still feel the ocean floor shaking and predicts that the next quake will be worse than the previous ones.

We get news reports about the quakes, the death toll, and questions about the whereabouts of the Justice League.

Batman realizes that they have been concentrating their efforts on the forces that are working against the Kindred. Wonder Woman observes that the four beings represent some fundamental forces, mainly starlight, magic, the color spectrum, and speed. The powers of the Justice League. The Kindred are using the same powers as the League to awaken something, but the League is unable to fight harder because the Kindred are made of people. Batman shifts priority to disrupt the power sources in the hopes that the people will be freed. Flash realizes that they were talking about stolen speed and their claim that it was theirs. The Speed Force was created when Barry was hit by lightning. The speed was stolen, but it was stolen from the Flash himself and he forces the speed back to himself. As a result the one Kindred is weakened. Cyborg contacts the Lanterns, he has a job for them.

Aquaman places the third batch of stones and moves to the forth location. Superman moves to take out the third object.

Wonder Woman uses her lasso to try to pry the four Kindred apart. If she can do that, then the people can be released and hopefully before the Awakening as well. The League’s efforts are not enough, Batman asks for the Lantern’s ETA.

Baz and Cruz arrive and bring in the Purge beings they found and pour them into another of the Kindred. The being starts to take the Lanterns’ energy from them. Flash tells them that their light is theirs and to take it back. The two Lanterns fight back taking the green energy back destabilizing the second Kindred.

Superman finds the third node and begins to push it into the inner core. The Kindred continue their song as Aquaman appears with his last batch of crystals. Superman finds the third node is starting to blow as Aquaman plants the remaining crystals saving the world from blowing up. The Kindred find that the world has held and is not broken meaning that the Awakening is upon the universe at last. Batman finds that the four beings are staggering, but if they finish, the people in them could be killed. Aquaman takes the last crystal and plunges it into the magic Kindred, disrupting its power. The spectrum Kindred changes tactics and attacks Jessica with energy from a different color spectrum. Simon blocks it and tells Jessica to continue to pull out the green energy. Finally, the song falters just as Superman emerges from a a nearby volcano with the third node. He was unable to get it to the core so he decided to bring it to the surface instead. The League continues their attacks but the Kindred continue to transmit making the battle a stalemate. Superman brings the node over the Kindred and his power is enough to break the stalemate and break the Kindred as well. The people are freed. Superman asks what the League knows. Batman knows that whatever the Kindred’s purpose was, they achieved it, but the world and the people were saved and that was today’s work.

Superman takes off to rejoin Lois and Jon, but says that he will be in touch as the League regroups for the next job of finding out what the Kindred’s true purpose was.

This issue wraps up the first arc of the new Rebirth Justice League. If this was your first issue of this title then you were in for a lot of confusion. It appears that Superman is more and more becoming a member of the Justice League while Batman’s trust of this new Superman is growing. It looks like Flash and Jessica could be starting a new relationship as well.

I did find this issue an very enjoyable action packed issue. It showed all the members of the Justice League doing their own thing and combining to stop a world wide threat which is exactly what I am looking for in a Justice League comic. We get some character development as we see that Superman’s primary motivation is Lois, his wife and Jon. We also get a hint of a possible relationship between Barry and Jessica, that being a departure from the Iris-Barry relationship we had before Flashpoint. DC is still looking at changing the destinies of some of its characters.

The issue was a great, but definitely not a great jumping on point, that will have to wait until next issue.