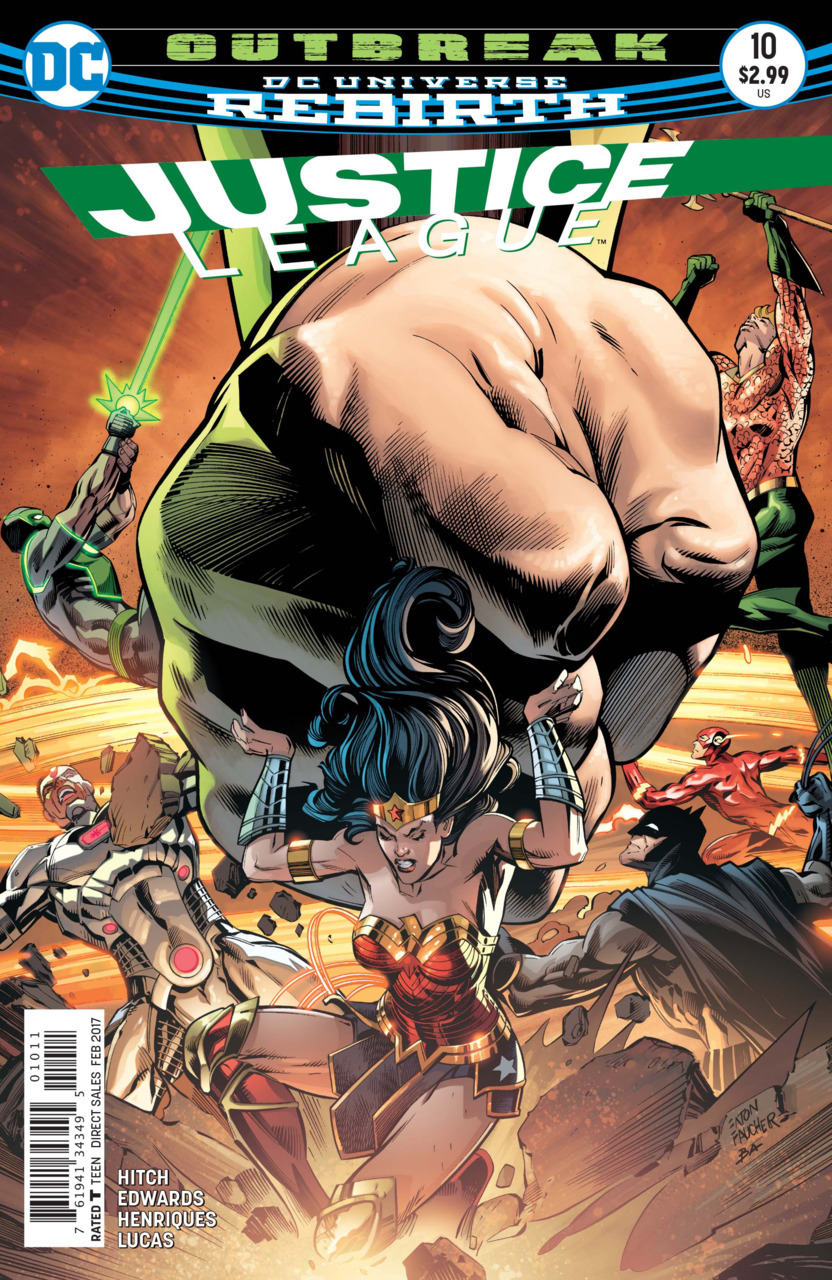 The Justice League are in Denver, Colorado at the doorstep of James Palmer, the widower of the lone victim of the Kindred attack from the first story arch.  James is an accomplished former hacker and his code has been found in the computer virus that attacked the Justice League in the last couple issues.  James invites the League in and denies any involvement and it turns out that his daughter used the code to create a powerful search engine called “Genie” capable of making pretty much anything happen and his son, thinking it was a game, used it to attack the Justice League. The League then discover that Genie has offered the combined fortunes of Lex Luthor and Bruce Wayne to any villain who can kill all of the Justice League as multiple villains show up and the fight is on.  The story ends with several villains taken down as Scarecrow and Amazo enter the fight.

This is more like it. The biggest problem the series has had up to now is the lack of any interesting threats or villains for the league to take down.  Hitch seems to be making up for lost time by using all of them.  It’s a good compromise between Hitch’s clear desire to create his own characters and the use of the deep bullpen of villains that the DC Universe offers.  I also like that Hitch went a bit obscure with his choices.  It’s fun to see characters like Giganta and Major Disaster show up in a comic.  I do kind of wish that in pulling from the Batman rogues gallery they went a bit deeper into the bench than the Scarecrow, but as I was complaining a couple of issues ago about not using the Scarecrow in an issue about fear, so I’m not going to complain about his use here.  I’m particularly interested in Amazo showing up as that’s exactly the kind of threat that an action heavy comic like this one should end on.

The story’s main threat seems to be some sort of Artificial Intelligence Search Engine… think Skynet by way of Google.  Hitch’s last few stories have all featured some sort of threat or force that attacks the league but lacks any sort of personality and are ultimately forgettable. I hope that Genie isn’t another example of this.  When you think about it, in a world where we all live online, a villain that knows all our secrets, can access any system, and can fund your own assassination with your own online bank account is an interesting and potentially compelling villain.

Hitch’s dialogue in this issue is a little clunky, which is always a danger in an exposition heavy issue like this one.  It’s also a little strange to me to have the Justice League knock on the front door of their newest threat like a bunch of girl scouts selling cookies, but by showing the reactions of the neighbors, Hitch was probably intending for the scene to feel a little surreal.

The art by Neil Edwards gets the job done but doesn’t particularly stand out either.  There’s nothing really wrong with the art but it’s not particularly dynamic and for such an action heavy book, the action feels smaller that it should.  This is supposed to be DC’s big “event movie” title and the art just doesn’t really support that.

All in all, while not perfect by any means, this is a step in the right direction and I’m happy to actually be looking forward to the next issue.