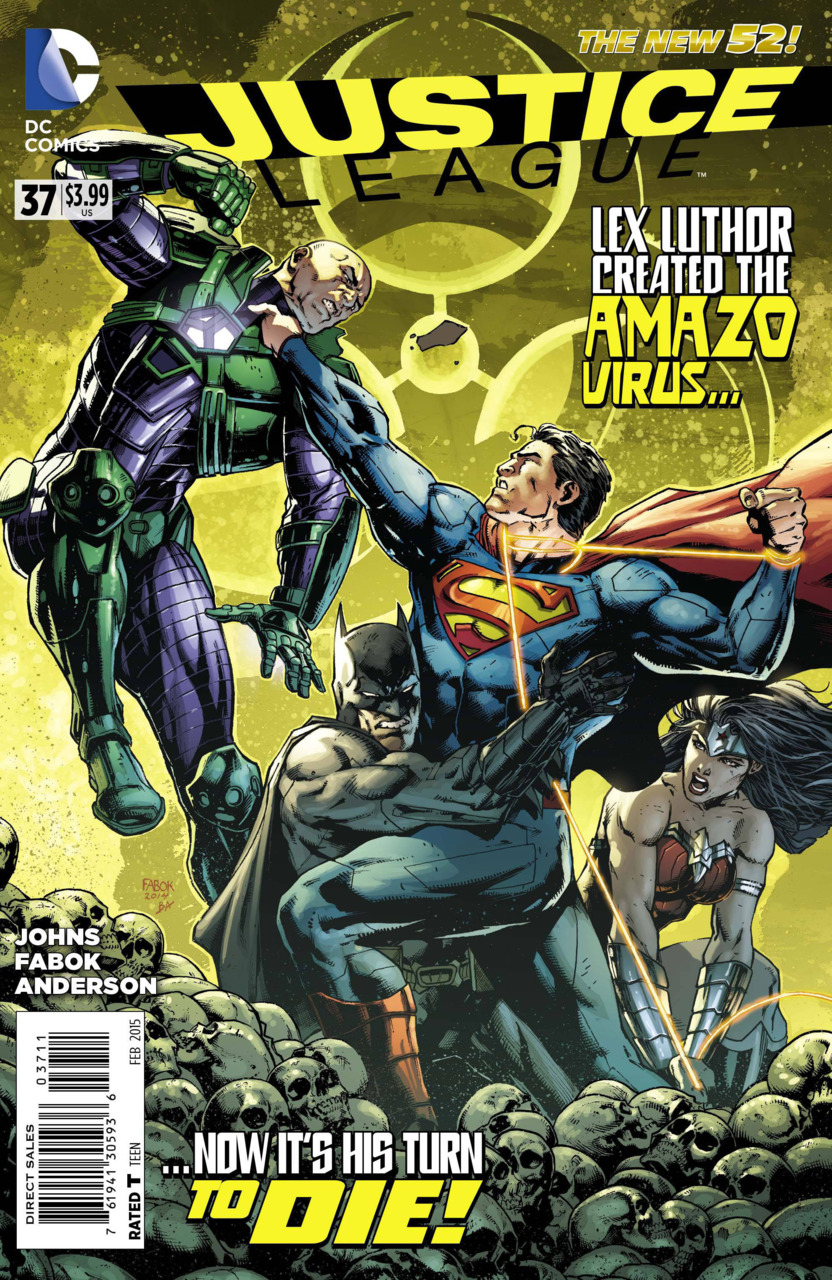 “The Amazo Virus” continues this issue as we see Superman and Batman confront Patient Zero on the streets of Metropolis. The duo contemplates how to take down Patient Zero in order to obtain a blood sample, but Zero’s eyes suddenly light up and shoot out a massive energy blast…very similar to Superman’s heat vision. Superman looks startled and asks if Batman is okay, he explains that the haz-bat suit protected him from the blast. Zero then notices Superman’s flight and evolves a set of wings to fly himself into the sky…it seems that like Amazo, this virus has allowed Patient Zero to naturally evolve and copy the abilities of meta humans. Zero ends up escaping as Superman and Batman attempt to pursue.

We then cut to Lex Luthor who is explaining the situation with the Amazo Virus to his sister Lena, it was originally planned to strip the abilities from meta humans temporarily…Lena however mentions that she knows he is lying, and asks what the real reason behind its creation was. Luthor ends up dodging the question and leaves.

Batman and Superman continue their search, which leads them back to the Lexcorp Tower. Zero springs from nowhere and surprises the two heroes but Wonder Woman appears and subdues him with her Lasso of Truth. Wonder Woman attempts to question Zero about how he was exposed but it ends in another heat vision blast.

Back with Lex Luthor, he and Captain Cold discuss the situation and Luthor again explains that the virus wasn’t designed to infect and kill the members of the Justice League…Cold mocks him and Luthor retaliates that things are far worse than people know, more than the Justice League knows, and that everyone should be afraid. A sudden explosion rocks the bunker, and a man named Bullet steps out of the smoke and informs everyone that there is a bounty on Luthor’s head.

Back at Lexcorp, the trinity is in a heated battle with Patient Zero. Superman and Wonder Woman manage to hold Zero long enough for Batman to draw the blood sample he needs. The issue closes with several panels showing Bullet coming up on Luthor and shooting him…as well as Patient Zero blasting Batman with heat vision. The last panel shows that upon impact, Batman’s suit has been severely damaged and he has been exposed to the Amazo Virus.

What an issue! I think that for me, Justice League has been one of those titles that has delivered a consistent run on their stories since the beginning of the New 52…and the Amazo Virus is no exception.

Geoff Johns writing is spot on as usual. Some lovely banter between Batman and Superman, especially when Batman refers to his suit as the “haz-bat” suit…and Superman’s reaction is perfect, “did you actually call that a haz-bat suit?” Batman then counters that it was Robin’s idea. And that brings me to my next point; does this take place after Damian’s return? Or was this something that he named before his death? I prefer to think the former is correct, at least then I can start to make sense of this timeline of stories. I also like that Lex Luthor is still hiding something from the Justice League…did anyone really believe that he made a simple virus to inhibit the powers of meta humans? I don’t think so.

As for Jason Fabok’s art, it is amazing as always. I really enjoy the splash pages throughout the book; however it does tend to read a little quicker since the fight scenes take up some of the pages.

Overall this story is turning out very well and it will be interesting to see how things play out now that Batman has been exposed to the Amazo Virus…nothing can keep the Dark Knight down right?