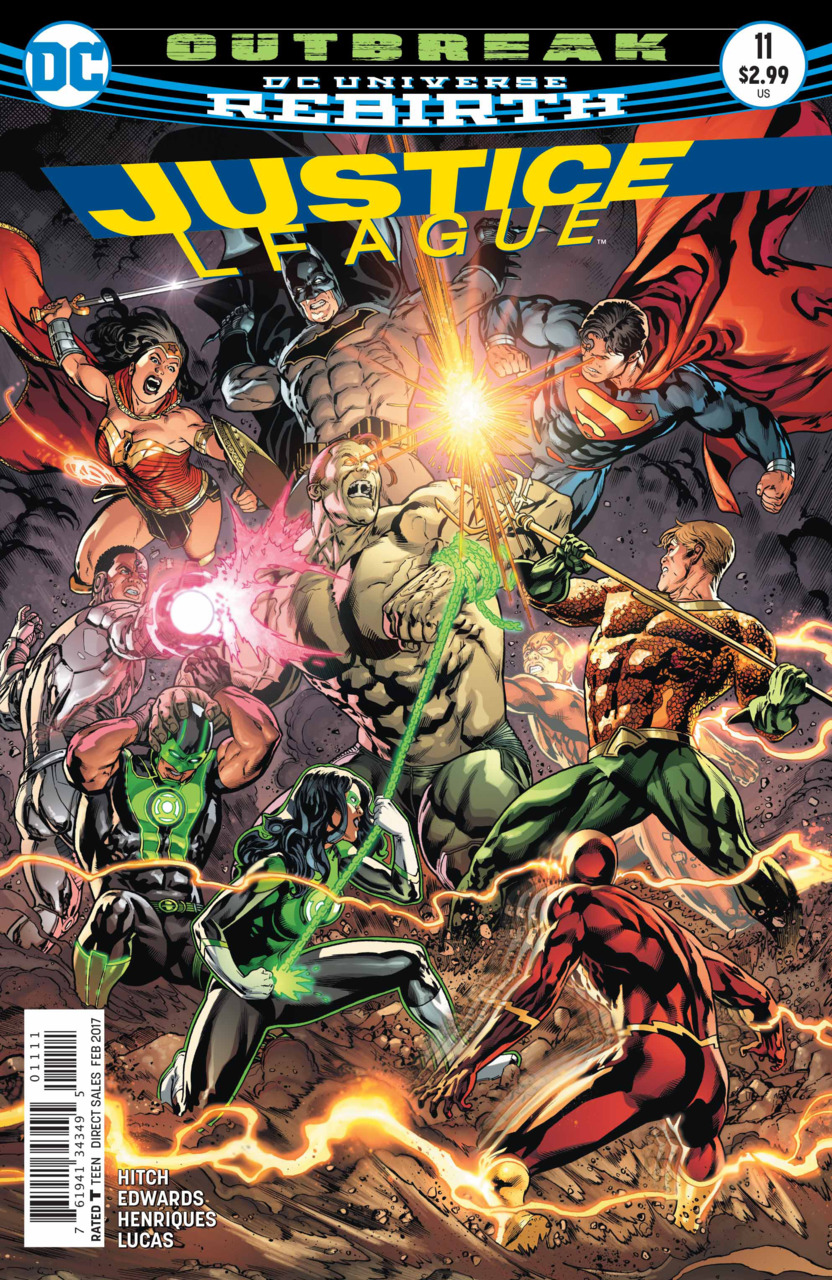 The Justice League are locked in a battle with a collection of supervillains, including the Fearsome Five, Scarecrow, and Amazo.  The villains have been offered the combined fortunes of Lex Luthor and Bruce Wayne to kill the Justice League by a computer program on an Ipad called Genie that was developed by Lily, the daughter of James Palmer, a grieving computer hacker and put into action against the league by the Hacker’s son, who thought it was a game.  The League fights off the threat with the help of the Jessica Cruz Green Lantern, who returns to the action at the last minute and with the help of Lily, who uses Genie to turn Amazo against the attacking villains.  The story ends with Batman speaking to Wonder Woman about how Wayne Industries will provide James with a good job and pay for Lily’s education, stating it will come in handy in the future, making reference to the coming threat of the Suicide Squad crossover.

This issue is something of a mixed bag.  Bryan Hitch is at his best when he’s either writing or drawing a big action sequence and he does it well here.  The artist, Neil Edwards, does a decent job doing what the script asks of him. The fight between the Justice League and the various villains is fun, but with the inclusion of so many villains in a single issue, there are only a few panels to dedicate to any one character before the story is forced to move on.  The Scarecrow in particular is a bit wasted here and is relegated to a few panels of Batman looking terrified before Scarecrow gets taken out from behind by James Palmer, after which Batman is totally fine and immediately snaps out of the effects of the fear gas.  I appreciate the inclusion of a classic member of the Rogue’s Gallery, but given how little time the issue has to devote to any one character, a more physical threat would have made more sense.  Scarecrow works best when there’s time to delve into the mind of his victims and that takes time that the story just doesn’t allow for.  Some of the other threats, like Amazo, Giganta, and Major Disaster are well used and in those moments the story clips well between the fights involving those characters.

The Genie program that has been the focus of this story arch is anticlimactic.  When I read a story I try not to get caught up in my own fan fiction and judge the story based on what I would do with it, but the story seemed to be leading to this program being its own threat or the start of a new artificial intelligence villain which could have been very compelling.  Genie turning out to be nothing more than a McGuffin is a bit of a letdown.  As the program has proven to be nothing more than a plot device, the story would have done well to remove the cyber-attacks of the previous issues and  make the arc about the various villains attacking to give all the different villains more time to flesh them out more and have Genie been more of a quick explanation.

Jessica Cruz’s return is a welcome one, but it highlights how unnecessary it was for her to leave in the first place.  There doesn’t appear to be any particular lesson she needed to learn or obstacle to overcome for her to return to the team and leaves the feeling that the writer simply didn’t feel like writing her for a few issues.

While this issue on its own has some entertaining moments, as the end of this story arch, is ultimately unsatisfying.