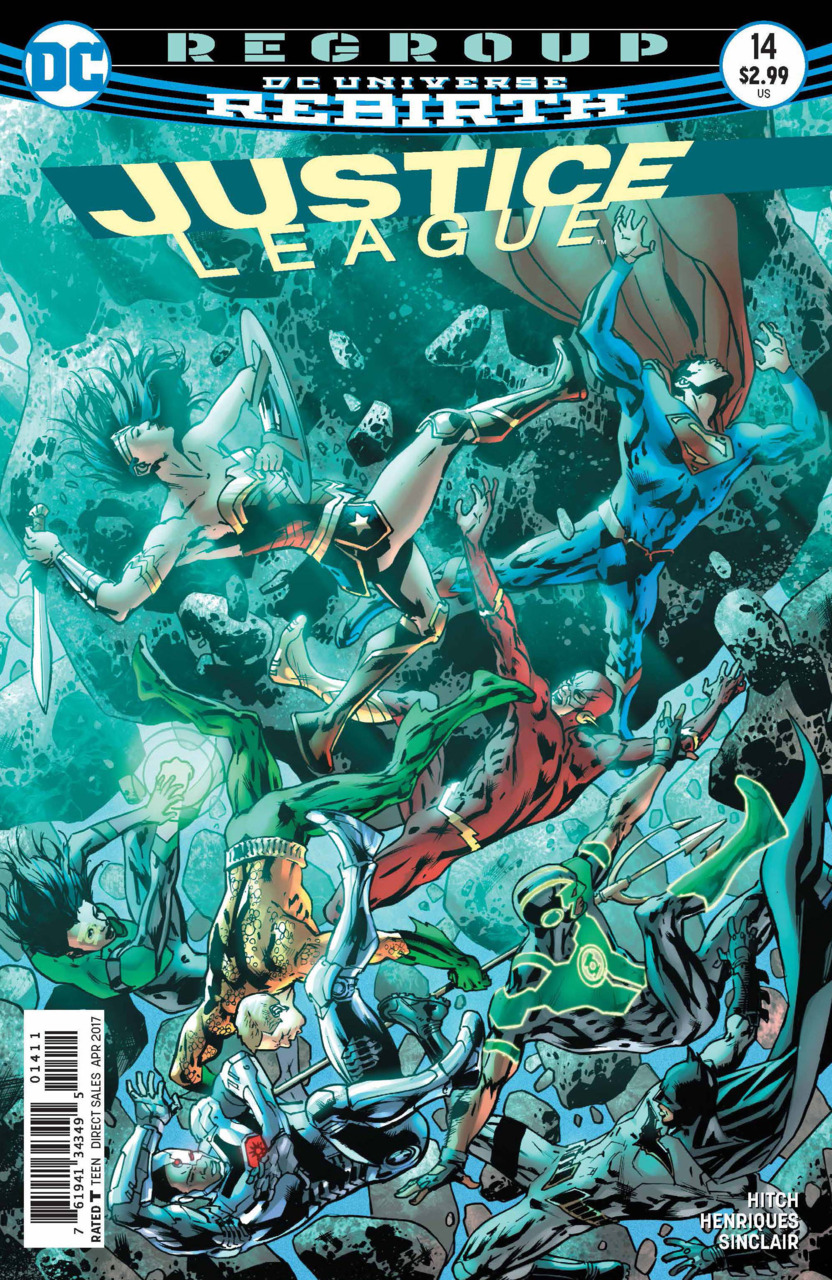 “Regroup” opens with the League trapped in what appears to be a cavern. Wonder Woman and Jessica Cruz appear to be the only members of the League to be conscious at this moment. Jessica is using her ring to keep the League safe from the collapsed rubble.

We flashback to a news broadcast. A giant ship of some kind has appeared in the sky’s of Metropolis with what appears to be cities on its surface. The citizenry can only stare up as the full Justice League arrives with Superman in the lead. A battle erupts and the League is seen plummeting to the Earth. After a massive energy build up,the ship fires on earth and levels a crater in Canada.

In the present Cyborg regains consciousness and Wonder Woman asks for his help with Superman. Victor and Diana free Superman who has also regained consciousness. Batman stands up and asks what it was that they fought. Cyborg was able to connect long enough to disrupt their systems and shut off their main weapon. Cyborg was able to determine that the thing is a mining colony that goes from system to system breaking everything down. The League was hit with a gravity drill that could make Flash slower and Superman heavier. Superman’s strength and invulnerability is not going to mean much against the energy drill.

Flash wakes up and Jessica asks if he is okay, which he is. Aquaman regains consciousness himself lamenting that he is out of his depth with this threat. He is more effective with bad guys and invading armies, he is unable to punch a planet thing to death. Batman surmises that with the League down, the Earth’s armed forces will move in with nuclear weapons, but that will not be enough. We see that Batman is right.

Simon Baz is the last League member to wake up. Jessica laments that Simon could have died while Diana tells her that it was her shield that saved the entire League. Jessica responds that the shield was not a proper shield. She is not ready for any of this. Barry comforts her to tell her that she has saved them more than once in the past. Simon tells Jessica that she does belong, it is him that does not. Superman tells him that all the Lanterns, even Guy Gardner are all great lanterns in his time. Wonder Woman continues that the League needs a Green Lantern in its roster. Simon says that the League needs one, not two Lanterns. Superman responds that all the Lanterns are different in their own way. Jessica and Simon are both stronger together than apart.

Jessica counters with her difficulty in creating constructs, she does not feel that she has a good connection with the ring. Simon counters that she has a far deeper connection with her ring than he does. She connects to the ring emotionally while he just tells it what to do. Simon still says that he doesn’t not belong with the League. Cyborg tells him to shut up. He recounts that when the League first got together, none of them belonged together but they learned in time. Cyborg says that when Hal left his beat with Simon and Jessica, none of the League questioned it and the League themselves said that the two of them belong with them because the League said they did. Flash applauds Victor’s speech. Aquaman however questions the new makeup of the team and the differences not being the two rookie Lanterns. He is referring to Superman.

Batman only wanted Superman in the League so he could keep an eye on him and figure out what his presence had to do with the death of their Superman. Superman says that Batman once told him the only way to find the truth was to question everything. Batman counters that he never told him that. Superman muses that it must have been his Batman that said that, the two are so alike. He recounts his early relationship with his Batman even reporting that he kept Luthor’s kryptonite ring it use against him. He even says that Batman kept files on all the Justice League and how to beat them. Aquaman and Wonder Woman both ask this Batman if he keeps these files which he admits to. Superman tells Batman to tell the shocked and betrayed League what he really thinks of them. Superman says that Batman does not just distrust him, but the entire League.

Batman defends his files, saying that the League consists of people with super charged weapons, Amazon princesses, kids infused with tech from Apokolips, the king of the largest nation on the planet and a man who can move so fast nobody can see him coming, not to mention the presence of Superman. How can that power be stopped if any of them went rogue. Batman further states that their enemies consist of alien races bent on conquest, mind control, dark gods, and magic. He also alludes to the just finished Justice League/Suicide Squad cross over. What if they do not manage to win? Batman says that he has to be prepared to take them down if they ever went bad and turned against their loved ones, somebody has to be able to stop them.

Wonder Woman asks Superman if he is okay with Bruce’s files. Clark responds that he was not at first but with time got used to it and even found it reassuring to know that there was someone who could help him and hold him back if necessary. Wonder Woman further asks what if somebody uses the information against the League, Batman says that the files are very secure and the League just has to trust him. Batman says that the counter measures have to be kept secret in order to be effective and he feels he has earned the League’s trust. Superman counters asking which one of them is trusted now.

After a moment of silence, Flash asks Superman about his League, the JLA. Superman says that they all are outsiders but with the League, they belonged. Simon is recovered enough to help Jessica with the burden of keeping the League safe in the cavern under Canada.

Wonder Woman says that they have to trust each other, they cannot be operating as individuals. They have to be together when they engage the mining colony. Superman says that he is here to help, he just wants to keep the world safe for his family. Wonder Woman says that the other Superman did not have a family. Clark tells them to stop thinking of him as a different man. The two of them were the same. He will lay down his life for the others but he wants to know that he is not alone. Bruce says that he is not and Barry seconds Bruce’s sentiments.

We get a news report that the military attack had no effect and the thing is moving again. No sign of the Justice League, are they dead.

Batman starts to strategize by equating the colony with the Death Star from Star Wars. Flash jokes asking Vic if he recorded Batman using a Star Wars reference to play at the Christmas party. Batman gets the topic back on track by saying that there must be a weakness to exploit. They have to get inside. Batman plans to use the heavy hitters to keep the weapons busy while the others boom inside to take out the command structure. Wonder Woman says that they have to do this as a team. Superman says that he could get the world breaking sphere he pulled out of the core if Vic could jump start it. The Lanterns can get to Simon’s battery and charge up and together they can cover Superman with their shields.

We get a closing page of a victorious Justice League flying out of a destroyed world mining colony to the adoration of the people outside the White House in Washington DC. Next issue Timeless.

What this issue misses in action, it gains in characterization. I particularly liked that we got into the hearts and minds of Batman, Superman, and the two Green Lanterns. I also enjoyed Wonder Woman’s insistence that they operate as a team and not as a group. From hearing the members plan an attack we the readers never see, we get the idea that they truly heard Diana’s admonition.

I also find it interesting that when we first see the League, the fliers are up front and the four non fliers are being carried by green energy bubbles. At the end all the League are flying out with the non fliers just surrounded by individual green auras, allowing them to fly like their comrades who can.

It would have been nice to see the attack, but with a concerted attack that is planned, and the purpose of this issue being a cool down issue after the Justice League vs Suicide Squad event, I understand why it was not shown here.

I like how Batman is drawn along with most of the members of the Justice League. The one complaint is that Wonder Woman’s face does not seem to be right. I cannot put my finger on it it just does not look right to me.

Despite that small complaint, I am excited to be reviewing this series for the foreseeable future. See you next issue.