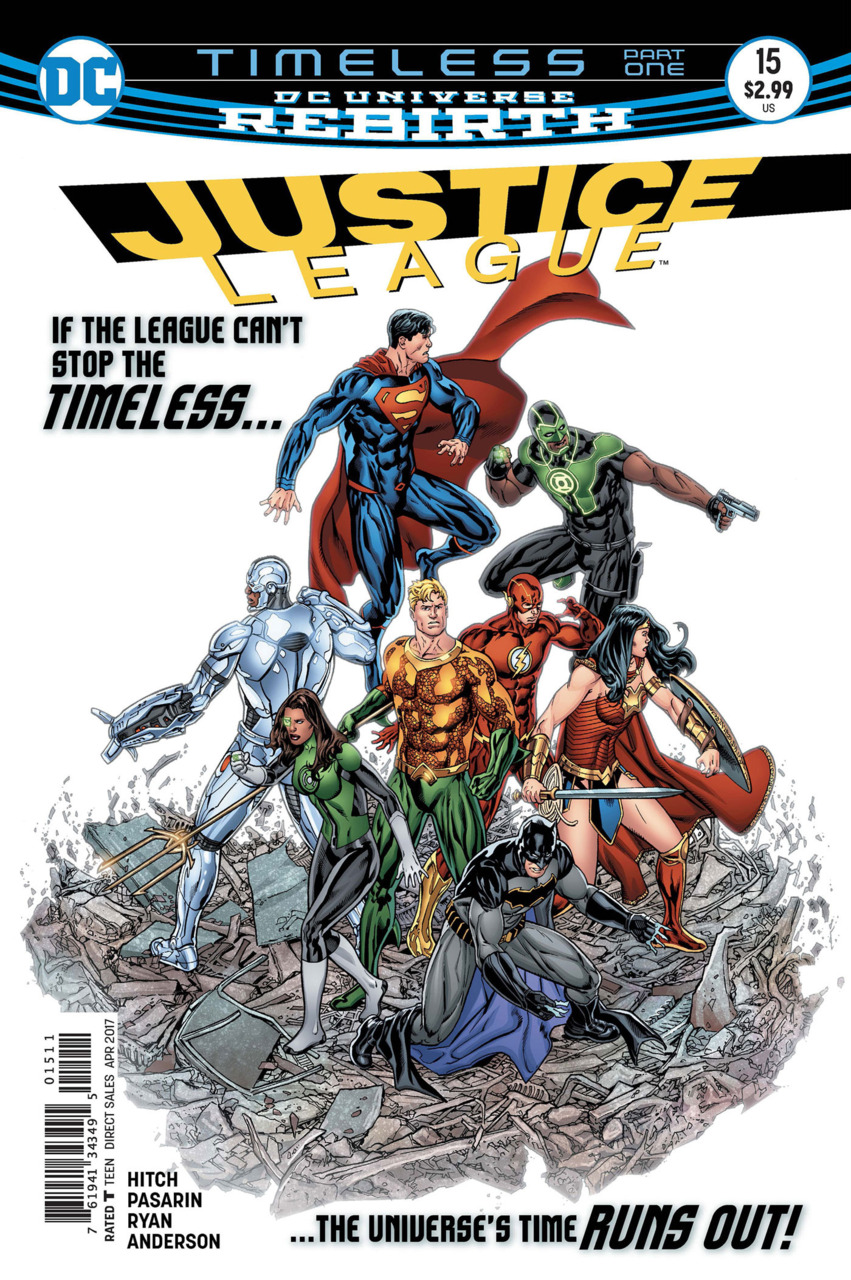 “Timeless Part 1” starts in the present in Gotham City. Batman is responding to a note asking for a meeting. He knows who sent the note and he is expecting something dramatic. In Metropolis, Lois is gassing up the family car with Jon in the back seat. He is playing on a tablet and Lois spots a strange tower and asks Jon to find his dad. Superman is seen flying off with Lois just saying never mind. Superman arrives to the tower to meet Batman. Clark does not know what is going on and Batman just says the end of the world. Superman sees an energy field and since it is where Jon and Lois are, he wants to leave. Batman tells him to wait and holds him back. Batman says that Jon and Lois are not dead but if Superman goes now, all will be lost. The two enter the tower and the energy field envelopes it in a wave of chaos. Batman says that they are already gone, but they can bring them all back.

We jump to Aquaman. He is wearing a bracelet and appears to be waking up. He is confronted by four beings that are speaking a foreign language Arthur does not recognize. They say that Arthur must answer to the throne of Atlantis.

Yesterday, the Justice League minus Batman and Superman arrive at the United Nations. Arthur is set to speak to the assembly to reassure the world that they are safe from the Justice League, especially since the League in issue #7 threatened to take over the world. Suddenly they find a girl running to them screaming for help. Behind her are a battalion of monstrosities.

We jump to Wonder Woman alone wearing a bracelet similar to Aquaman. She has seen where she is before. She heard stories told by the gods and the Amazons. She sees Zeus’s father Cronus and he is eating his children. Diana is grabbed by a woman who pulls her away. She tells Diana that she has one child left and she will protect him from Cronus. Wonder Woman deduces that she is talking to Rhea, the mother of Zeus and she is with Zeus now. Zeus is crying saying that he will cut his brothers and sisters from his father’s guts and they will tear him down.

We return to the UN. The Justice League are in a frantic fight. Flash grabs the girl to try to get her to safety but he finds that he is slowed and the girl says it is a temporal grenade. Flash is punched in the back and goes down. He and the girl are separated from the fight. The girl tells him that the effects of the grenade will wear off. She says that the beings are trying to stop her from saving the world. She says that she is just a watcher and she should not be interfering, but she gives Flash the bracelets and tells him that when his speed comes back, he needs to get one to each of the others.

At the fight the Justice League is not successful. Their opponents, the Timeless are strong and their armor cannot be penetrated by their attacks. The girl tells Flash that the Timeless is a religious movement who believe that super powers should not exist on Earth. She puts a bracelet on Flash and calls herself Molly, a keeper. She has been watching Earth since the people came out of the trees. Flash says she looks human and Molly responds by saying so does Superman.

Batman and Superman are in the Infinity Corporation Building. Batman introduces Clark to Vincent, Alexis and Jane of the Corporation. Clark already knows them and what the stones can do. Batman chides Superman saying that he watched everything that happened without helping. Superman asks where Lois and Jon are. Vincent says that something is rewriting the past and maybe the future. Things are being changed and Superman and Batman are the only two they could reach out to. Now all they can do is ride out the wave and see where they end up.

Cyborg is fighting the timeless when suddenly he is wakes up in Metropolis in the 31st century. The boy who finds Victor deduces that he is time traveler because of his archaic tech and residual temporal energy.

The League rally together without the Flash in the UN. Suddenly Simon and Jessica wake up alone in a burned out Washington DC in the 26th century. They are attacked by other lanterns wielding green energy, calling themselves the Earth Corps. The Green Lanterns quarantined Earth and now they are under arrest.

At the UN, Flash places a bracelet on all the members of the League as they fight the Timeless. Flash wakes up in the streets of Central City. He finds a paper and discovers that he is in the day the Speed Force was created.

Molly asks if everyone is okay. The League is alone with her and find that they are in the Midwest. She needs their help in destroying a nasty looking object that does not register on the Lantern’s rings. Molly calls it a temporal bomb and the Timeless detonated it 5 minutes ago. There are a total of six such bombs. They exists in certain key points in the past and future where there were outbreaks of powers. She gave the League the bracelets to allow them to ride the detonation wave to the other bombs. The Timeless will be ready for them however and the wave envelopes them.

In the Infinity Corporation building the wave has subsided. Superman cannot see outside. They look out a window and see that they are orbiting Earth, but not like they have seen it before.

This issue was extremely difficult to follow. I know this is a time story so there will be many jumps in time, but each jump was jarring as it probably was meant to do.

I do not have a lot of comments on this issue as I really do not have any idea where this story is going, but I did like it for what it was. It was an attention grabber and I want to see where this is going to go.