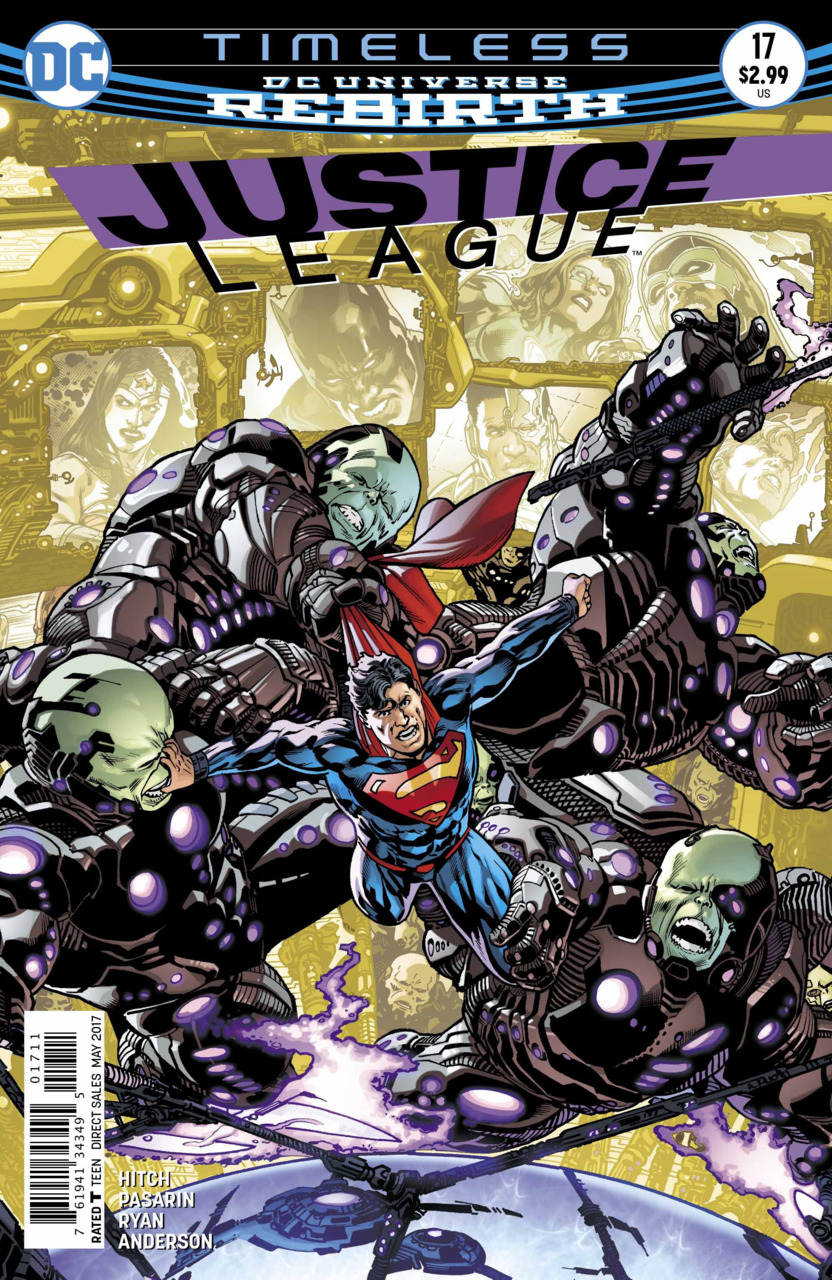 The Story (Spoilers): Superman is in the ship of the Timeless and wants to know where his wife and son are. The great big green old-man-baby looking guy, Tempus, has other concerns at the moment. He tells Supes that he is an inter dimensional consciousness that is trying stop something from forcing its way into existence ultimately ending the universe. Superman isn’t impressed and tries to attack Tempus to encourage him to help locate Lois and Jon. A legion of Timeless soldiers grab onto Superman and restrain him. Tempus says that he wants Superman to help him save everything from destruction.

In ancient Greece, the energy from the gods is being drained by a Timeless ship. Wonder Woman rallies the Olympians to fight the Timeless soldiers descending on the city.

In Central City, the Flash is witnessing the lighting bolt that created the Speed Force and turned him into the Flash. The Timeless machine over the city is sucking up all the Speed Force energy.

In Ancient Atlantis (before it sunk), Arthur realizes that the Timeless ship is sucking up the energy from the Earth Stone crystals.

In 26th Century Washington DC, Lanterns Jessica and Simon witness the Timeless ship sucking up the energy from the Power Battery that is imprisoning and quarantining the Green Lanterns.

In 30th Century Metropolis, Cyborg gets help from a teen inventor who gives him a future tech bracelet so he can fly up to the Timeless ship.

Tempus reveals to Superman that he is going to use the energy from across the epochs to move the Earth’s solar system to beyond the edge of the universe so the rest of the universe will be safe from the shenanigans of the super powered. Superman spills the beans about the Justice League being spread across time to stop the Timeless ships.

Tempus, realizing the threat, sends soldiers to attack the JL members. Cyborg faces down a host of them. Simon and Jessica rally the now released Lanterns to attack the Timeless ship. Arthur flies up to the ship in his era with the help of some of the Atlantean magicians. Diana attacks Cronos with her lasso so the Olympians are freed to join the fight over Greece.

Batman is with the Infinity Corporation team listening in to Superman and Tempus’ discussion. Batman asks if they have anything that might help Superman. Alexis shows him a mechanical Superman Suit that used to belong to her Father, Lex Luthor. Until next time…

Break Down: The story by writer Bryan Hitch continues to unfold at a solid if scattered pace. While the nature of the story is spread out among different times and places, there is steady progress on all fronts. Tempus’ plan becomes clearer. By sweeping the Earth’s solar system into the cosmic dustbin, the rest of the universe will be protected from the constant threats to the nature of existence we cause. It is actually not a bad plan and hard to argue with his logic unless you are on the business end of the Timeless broom. The reveal of the Superman suit at the end of the issue is a little bit of a let down, but we will see where Hitch takes the story.

Pencils are by Fernando Pasarin, inks by Matt Ryan, and colors are by Brad Anderson. There are some very strong panels. The title page where Superman faces of against Tempus’ face is very dramatic. The red and yellow of Supe’s cape contrasts against the green face of Tempus. It is a strong image. Some of the scenes are a little fussy with lots of detail but a little hard to know what to focus on. The green hues in the Green Lantern pages are very vivid and almost neon which is a nice change from some of the rest of the issue.

There is a lot of dialog and exposition in the book and letterers Richard Starkings and Comicraft do a good job of keeping things moving without interrupting the visual flow of the story. There is an excellent example of this on the first Ancient Greece page. The dialogue is expertly positioned across the panels of the page so the order of the action is completely clear without blocking any of the characters.

My Take: Like I’ve said before, I’m not a regular Justice League reader so keep that in mind as you consider how to evaluate my rating. While this book isn’t going to make me a regular JL reader I am enjoying the story line. The nature of these team books is that the story changes locations, with many different things happening to the disparate characters on the team. I find this frustrating and prefer to have a story exposed with many fewer threads. However, this story takes advantage of that ‘weakness’ and provides some insight into the pre-origins of Wonder Woman and Aquaman which I found compelling. I would heartily recommend this book to a Justice League fan and a soft recommendation to a non-fan.