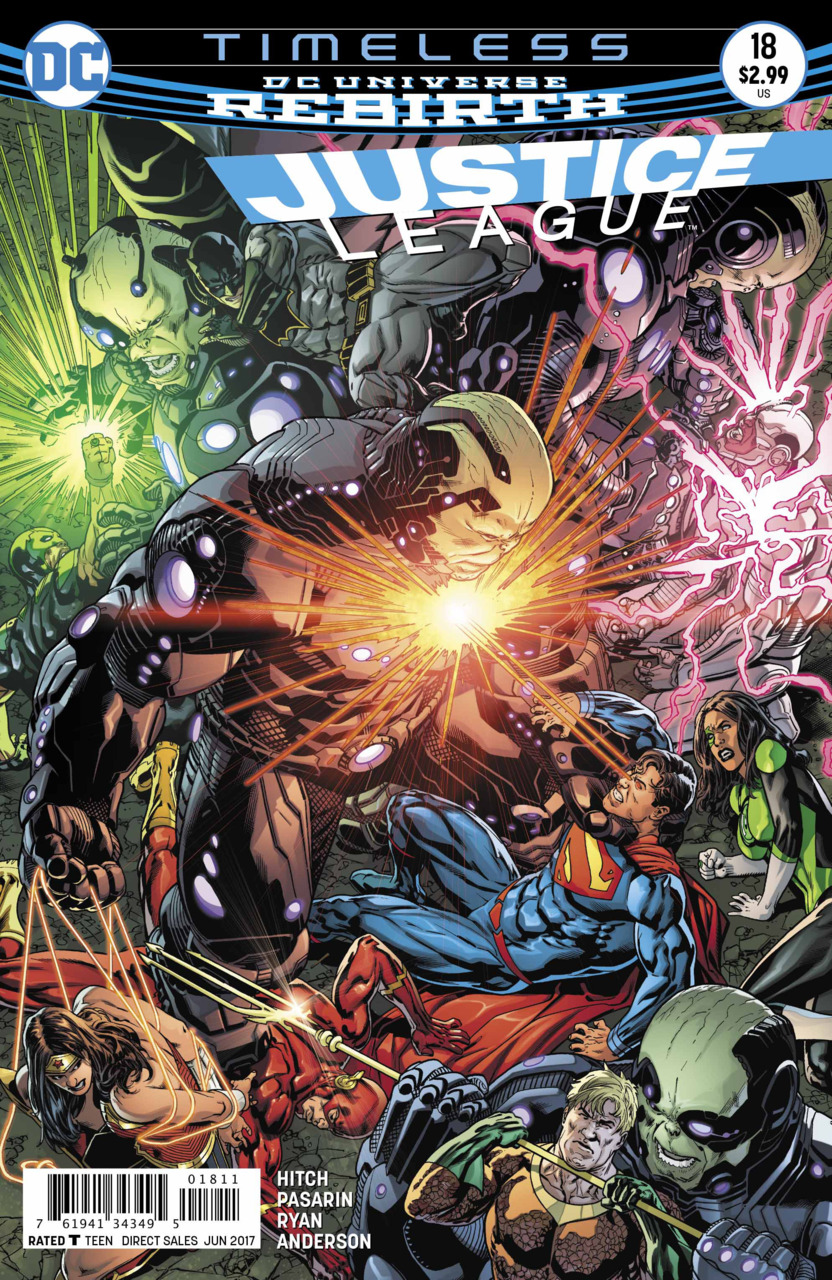 The Justice League makes progress against The Timeless as they fight to save the Earth across time and space. But just as it appears they have gained the upper hand a new threat emerges in Justice League #18.

The Story: Lois and Jon are at the gas station where we last saw them. Some Timeless warriors descend upon them, surrounding the pair. Jon wants to fight them but Lois holds him back.

Superman is in the main Timeless ship talking with Tempus who wants to destroy Earth so the Super-powered will stop messing with reality. He makes a good argument but Superman is concerned with saving Lois and Jon so isn’t in the mood for Tempus’ monologue-ing. Superman doesn’t have his superpowers because Tempus has increased the level of red solar radiation which weakens the Man of Steel.

Batman is in Lex Luthor’s Superman suit and is in the Timeless spacecraft with Jane, Lex’s future daughter. Jane and the other Infinity Corporation members are time travelers from the future and are trying to keep Earth from being destroyed. Vincent notices that the energy pattern readings from the hub where Superman is and his own brain waves are similar. Batman and Jane make their way through the Timeless ship and are able to break off a portion of the Timeless spacecraft. The broken portion of the ship moves through space and crashes into the hub room and breaks open the roof which allows yellow sun light into the hub chamber. The yellow sun repowers Superman. Supes is able to fight off the Timeless soldiers. He realizes that Tempus is just a hologram with a mind that is virtual and distributed in the computer systems throughout the ship. Superman and Batman destroy the spacecraft which they hope will disable the Timeless attack.

All across space and time the other Justice League members are also fighting the Timeless soldiers. As Superman and Batman destroy the main ship, the Timeless soldiers in all of the various time periods go limp. All of the Justice League members are able to make it to the center of the energy hubs and put the devices that Molly gave them into the core.

Molly the Keeper, the one that recruited the Justice League to solve the Timeless problem, is watching the Timeless soldiers descend on the planet. They go limp as did all the others and crash onto earth. She is able to connect to all of the energy hubs across time and space and pull all of the energy into herself. She says that the whole world will finally be safe throughout all time – once all of the super heroes and villains are killed. Uh oh. Until Next Time…

Breakdown: Writer Bryan Hitch continues to deliver a solid plot that keeps moving and keeps making sense. There are a lot of twists and turns and hidden agendas which stop this story from being predictable. The goals of the Infinity Corporation still aren’t clear, and the hints about Molly not being what she seems become frighteningly real. This issue wasn’t nearly as dispersed as past installments of this story have been. We see much more of Batman and Superman than the other JL members. This is probably fine if you are Bats and Supes fan, but disappointing if you have another favorite.

Pencils are by Fernando Pasarin, inks by Matt Ryan, and colors by Brad Anderson. Many of the scenes are very busy and hard to get a handle on where the main part of the action is. So many of the panels consist of rampaging Timeless soldiers that the plot portion of the art sometimes gets lost. Since the soldiers are all clones they all look the same and many of the pages become visually repetitive.

My Rating: As I have said in previous reviews, I am not a fan of Justice League. I do like the story here, however, though not enough to make me a regular reader. I didn’t miss all the scenes with Flash, Cyborg, Green Lanterns et al since I felt those deviations, though necessary to the DNA of Justice League stories, broke up the flow of the plot. It is a weakness of team books that I personally don’t care for. However, I realize I am in the minority and if you are reading a Justice League review you are probably a fan and will enjoy this more than I did. Even so, I see that this is a solid story well told and drawn and I recommend it to Justice League fans.