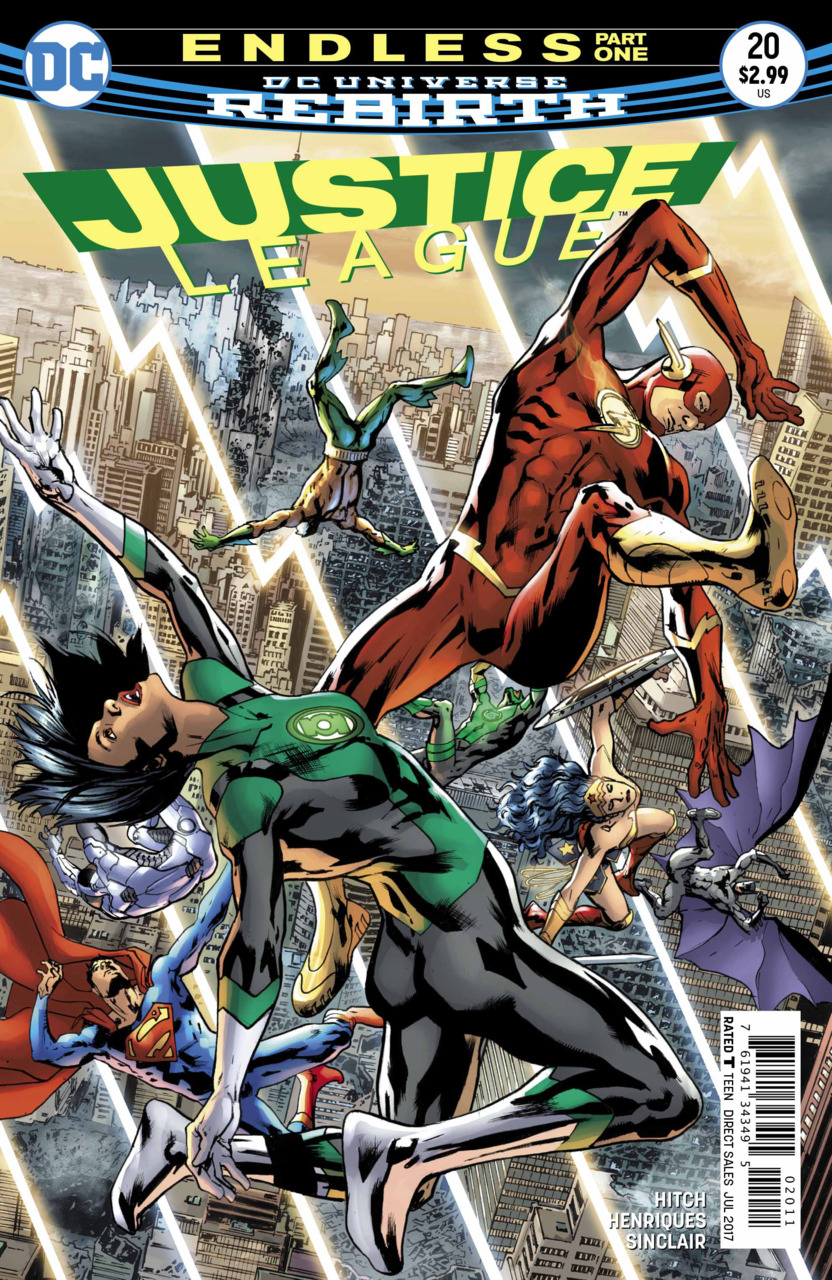 (Spoilers ahead) “Endless Part One” opens in Jessica laying in rubble. Barry is urging her to stay with him and he will get help. Jessica moans an apology and dies in Barry’s arms. Barry screams and looks up. He races to the source of the catastrophe. Barry screams that she is dead and the adversary responds with kill you like you killed them. We see a man with some kind of weapon who is asking why Flash should live when she and they didn’t. Flash reaches for the weapon and the scene shifts.

Barry and Jessica are having a breakfast date in a diner. Jessica was a little late as she got held up fighting a guy who could make living shadows. He was making animal shapes to rob a convenience store. Barry says that bad guys come in all shapes and sizes but then he asks if they already had this conversation. The diner explodes and Barry pulls his costume from his ring and Jessica activates her costume with her ring and the two of them streak towards and unknown assailant. Jessica asks if he is one of Barry’s rogues. Barry says no but he suddenly remembers this situation. We hear the same call that he killed her and them and took all that he had. Jessica attacks but she is hit by the weapon that looks like a drill and goes down. Flash has seen this before and he remembers Jessica and finds her in the rubble as before. She dies in Barry’s arms and Flash attacks the assailant and the scene shifts.

Jessica and Barry are in the street heading for the diner. Barry is confused, he has done this all before. Barry starts to talk about the shadow guy and she asks if he fought him also. Barry mentions this other guy and cars fly into nearby buildings. Barry pushes Jessica down and the two see the guy with the drill weapon. Jessica identifies it as an energy weapon and starts to activate her ring. Barry says that he will not watch her die again and attacks the guy in is civilian clothes, as before when Barry reaches the weapon, the scene shifts.

Barry is on the phone with Jessica, he is on his way to the diner and sees the guy in the sky with his energy weapon. Cars and buildings start to crumble around him when he lands with his weapon. Barry races towards him saying different every time, just a little different.

The scene shifts with Barry in his costume falling backwards. He ran past the place yesterday after the League dealt with a rampaging alien in Brooklyn. He identifies some energy coming from inside causing the building to crumble and Flash races in to find the energy source. Flash runs into the guy who says that they are all dead because of him and he raises his weapon and says that this is justice.

Next we see Flash falling backwards again this time outside and in the crumbling street. He finds that the destruction is bigger and more powerful than before. He runs to the source in hopes of touching it again and maybe he can go back to where it all started.

Now Flash is with the Justice League minus Jessica. Batman asks him if he is okay and Flash just says that this was before the explosion. Superman asks what is going on. Flash says that it hasn’t happened yet but it will soon. Flash says that he has been living these events over and over and if they cannot stop this guy Jessica will die. Simon questions Flash saying that he would know if Jessica died. Jessica is not dead yet and Wonder Woman asks him who is this guy he is talking about. Flash admits that he doesn’t know but they have to stop him. Batman asks Flash to tell them everything that has happened to him.

We find the guy. He is holding his son. They could not find a sitter so the couple’s kids came along. We learn that this man’s name is Jason and he is going to be involved in a demonstration. A man name Tony approaches and Jason asks if they can talk in private. Jason has been able to harness zero-point energy in a single device. He will bring the power of the heavens to Earth. The device has zero fuel costs and it can take the world to the stars. He starts to activate the device and a green field forms around it. The Justice League has arrived. Superman asks everyone to stand back. Cyborg reports that the device is advanced like New God’s tech and maybe more advanced and it is non-terrestrial. Jason tries to stop the League saying that the device is perfectly safe and he designed it. Cyborg reports a spike, the Speed Force is causing something to happen. Jason accuses Flash of doing something with it. We see the explosion and the devastated building they were all in. Jason finds the device but he is not strong enough to move the rubble to get to his family. The League recovers and Jason, who picks up the device and thinking that Flash caused the catastrophe, attacks the Justice League causing an even larger energy wave to be created. Next issue good-bye, cruel world.

This is an interesting opening for this story arc. It does borrow a lot from other time travel stories that revolve around a particular event happening over and over again. The same trope of the main character slowly realizing what is happening is also in here. I hope that this does move to unfamiliar territory. It is interesting that the start of each scene begins earlier than the last scene with noticeable differences but the end result is presumed to be the same, the death of Jessica Cruz.

The art here is very good. I love the details the artist draws in the diner, and the city. There are panels without backgrounds which for me adds a level of detail that can look somewhat realistic when the super natural elements of the story is ignored. It really looks like the artist loves to draw widespread devastation because that is what we see a lot of.

Interesting story beginning, I am interested in seeing where this will go but my rating is a little lower for using the “Groundhog Day” trope.