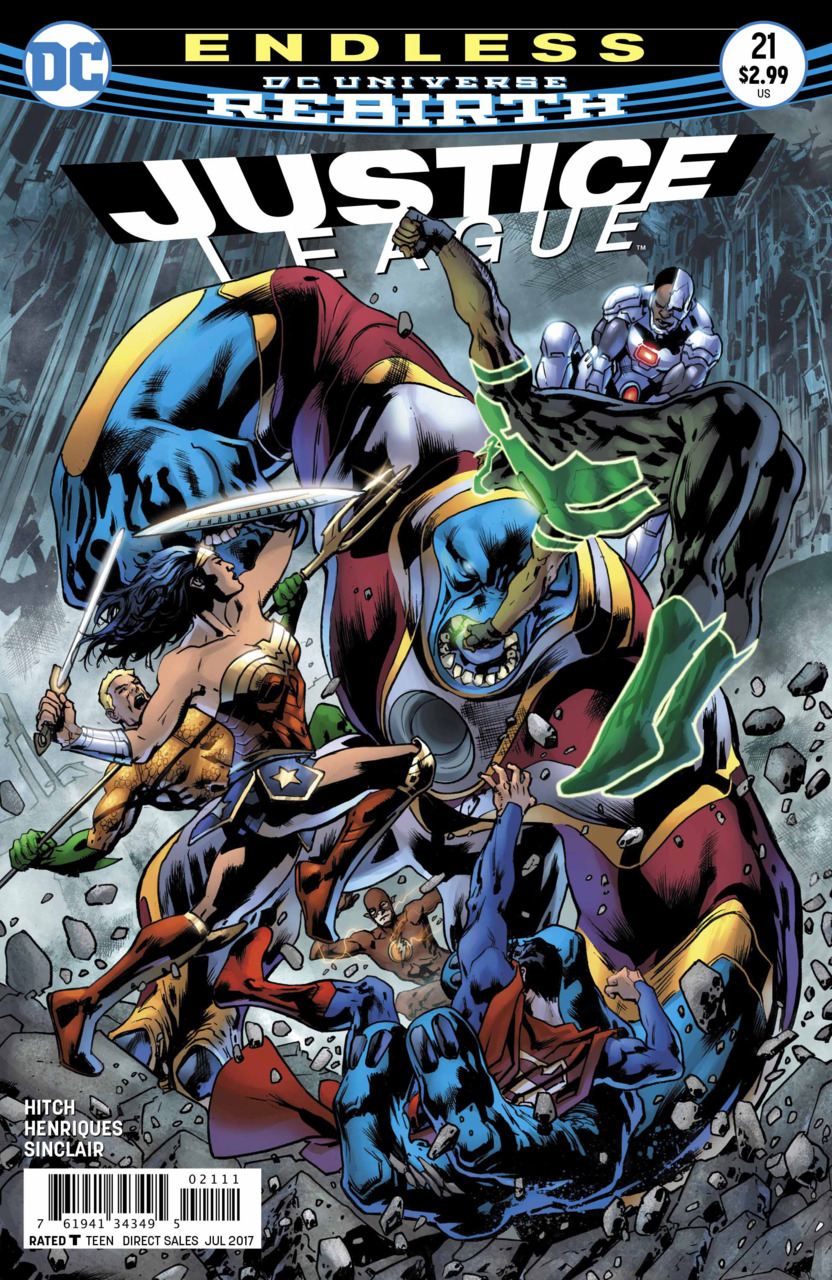 (Spoilers ahead) “Endless Part 2” opens in Queens, New York. Jake and his wife, Rose are having a little disagreement. Jake was supposed to be taking his family on a fresh start vacation but instead he is getting dressed to go to work. He has been called in at the last minute by his boss to conduct a demonstration of his new device. Jake promises that they will go on the trip on Sunday and asks Rose if she will come to the demonstration. She will provided she can find a babysitter at such a late notice. Curiously she asks if Tony will be there. Tony is Jake’s boss. The two leave on good terms.

The scene shifts to the Justice League in a fight with a rampaging alien. Flash is knocked down and Batman is helping him up. Flash is mumbling that it was them all along, they caused all the deaths. Flash realizes that he is back in time again and starts talking about this being before the explosion happened, he can change it and save everyone including Jessica. Batman asks what Barry is taking about. Flash tells Batman that he has been hopping backwards in time and the result is the death of Jessica Cruz. Batman asks Barry to start from the beginning and Barry recaps the events from the previous issue including his thought that he and the Speed Force may have done something to the device that caused it to explode. Flash admits that it sounds crazy and Batman just says “not for us.” The two head off to the research building where the demonstration will take place.

Batman figures that the weapon will be guarded and Flash has to be kept away from it. Batman is focusing on triggering another event which aggravates Flash who watched his friend Jessica die at least twice. Batman reminds him that she is not dead yet and orders Flash to stay away from the device. Flash gets angrier at Batman and calls Jessica, I think it is to see that she is still alive. Jessica is in the middle of the fight with the Shadow Puppet guy she mentioned last issue. Barry finishes her thought and Jessica realizes that Barry knows about the shadow guy. He hangs up with her and tells Batman that he is ready.

In the security office we see a couple of guards slumped over desks and see a third guard putting on sunglasses and a hat. It is presumed that this man is Batman because we also see Flash there. Batman will impersonate one of the security guards so he can get close to the device. He makes it to the floor just as Tony approaches Jake and his family asking to speak with Tony alone. Bruce stays with Jake Taylor and asks Flash to find out what he can about Tony Palmer, the project manager. Flash contacts Cyborg and tells him that he and “Vader” are dealing with something bigger than the monster of the week. The rest of the League was able to subdue the creature. Cyborg is now needed to decrypt some computer files for Flash.

Outside the exhibit hall, Jake confronts Tony about his affair with his wife. Rose told Jake what had happened and that is what lead to this fresh start vacation the family was supposed to be going on. Tony insists that she broke it off after a couple of times. After today Jake will not have to look at Tony again. If the demonstration goes well, the military will grant Jake his own department and as a result he will be taking his genius away from Tony’s department. Batman overheard this conversation and so does Flash because he kept an open com channel. Flash uncovers an email from Tony to an undisclosed recipient that the package will be delivered today.

Back with the monster, Wonder Woman and Aquaman discuss the fallen creature. Arthur is able to feel its panic and fear and thinks that the creature may be dying. Wonder Woman wonders because their was not a loss of life in the struggle and she believes that there is more to learn.

Cyborg finds that the device was built with alien tech a few months ago and essentially it is an energy source that is infinitely powerful. Batman hears and tells Flash to tell the others. He approaches Taylor telling him that his device will go off and kill nearly everyone in the building. Confused Jake starts tinkering with he device and discovers that it is on build up cycle. Batman tells Flash to evacuate the building while Jake tries to stop the device, but it is not responding to his codes as there is a higher authorization code which Batman deduces is from Tony. Tony is involved in industrial espionage and has copied the device’s specs to sell to Chinese interests. When the device goes off, it will destroy the facility, but it will remain untouched. He plans on killing everyone there and then come for the intact device. Flash finds Tony Palmer heading to the parking garage. Batman tells Flash that he did not set the device off, it was Palmer who set it off and Flash became connected to the device which gives the reason for the time jumps every time Barry touched the device. Flash begins to evacuate the building. Batman tells Jake that he overheard the conversation he had with Tony, he asked for the Taylor family to be there so he could kill the entire family.

The Justice League arrives just as Flash gets everyone two miles away. The League approach the device but are knocked back and Simon is unable to get a construct around it. Cyborg is not able to boom tube it away either. Victor does detect a brain wave pattern indicating that the device is alive. The creature wakes up and escapes the military that was trying to contain it. Simon surmises that the energy discharge could take out the whole state and lead to an extinction event. Superman attempts to approach the device again just as the creature barges in. Superman moves to engage, but Wonder Woman and Aquaman stop him. The device is a part of the alien. The alien grabs the device and inserts his starheart. The alien is a sentry guarding the Darklands’ border to prevent excursions. The starheart when to investigate a signal but it did not return. The alien will die without the starheart so it tracked it to earth. The alien detects an incursion in the outer verse and transports out leaving the Justice League with a warning to guard their own borders.

The issue closes with the Taylor family reunited, the authorities picking up Tony Palmer for industrial espionage and attempted mass murder, and the Justice League regrouping with Jessica Cruz. All of the battles since the Kindred indicates that something is coming and the Justice League needs to be ready. Next issue quarantine on the Watchtower.

This was a quick two issue arc and for that I am relieved. We had all the time-hopping last issue and this issue just explained the events in the previous issue.

I was not satisfied with the lack of action in this issue, I only saw this as a talking issue that could have been included in the previous issue if a couple of the time jumps were left out.

The art here is the same it has been throughout this run. It was neither bad or outstanding. One miscue was the scene where Aquaman and Wonder Woman discuss the emotions of the creature. The conversation opens with a word bubble pointing to Aquaman when it should have been pointing at Wonder Woman, addressing Arthur. The bubble makes it appear that Aquaman is addressing himself.

Overall, I am more interested in where this is leading than this story in particular.