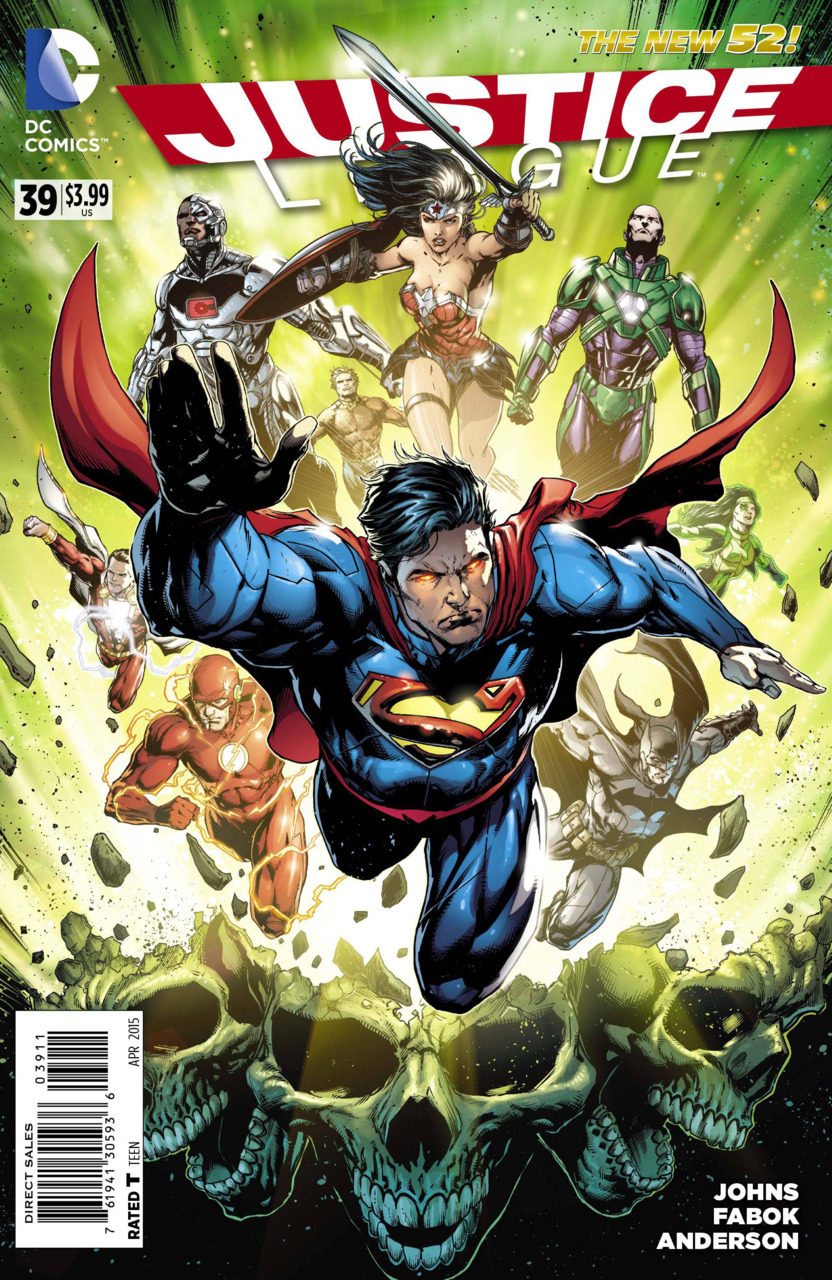 This month’s issue of “Justice League” brings us the conclusion of The Amazo Virus storyline. As we open with a bang, Wonder Woman, Superman and Lex Luthor are busy battling against the infected members of the Justice League. As they battle, Lex and Superman banter back and forth whether Luthor knew about the virus mutating into a sentient intelligence (as it seems it has) and Lex comments that it was a possibility. As he gets beaten down by Flash, Batman grabs Superman and lets him know that all they want is to spread and kill…as humans do. As Lex blasts Patient Zero with an energy beam, Zero manages to replicate it and sends Luthor flying. Wonder Woman comes to his aide and tells him that she will hold off the League, but Lex needs to get the antidote from Superman’s blood stream. The next few panels showcase some excellent fighting of Diana against several of the infected heroes.

As Superman flies Luthor to his lab, he quickly gives Lex a blood sample and flies off to stop the other infected humans from overrunning their camp. We then cut back to Wonder Woman who is getting pummeled from Flash…until she is rescued by Captain Cold. He manages to freeze the Scarlet Speedster in place…it seems that the virus doesn’t have a great control over the League’s abilities, as he would never have been able to catch Flash off guard as he just did. With some newfound respect for Cold, Wonder Woman continues her fight alongside her new ally.

Cutting back to Lex, Superman continues to hold a barrier between the crushing infected horde and Luthor as he continues to work on an antidote. He eventually succeeds but mentions that it may take days to synthesize enough to cure everyone infected. As the wall comes down, Wonder Woman informs the Man of Steel that the extreme cold can stop the infected and Superman quickly flies off and freezes Patient Zero alongside Captain Cold…with the source of the virus subdued, the remaining infected collapse.

Over the next several days, the Justice League is cured of the virus and it is revealed that some of the cured survivors have managed to retain their metahuman abilities. Luthor and Superman end up discussing Patient Zero who seems to be immune to the cure and has retained his powers…but he is being carefully monitored and controlled with reduced temperatures. We then see Luthor talking to Patient Zero who informs him that the virus inside is constantly evolving…and we see him take on a new form: Amazo itself.

As the issue ends, we see Neutron talking to Steve Trevor who informs him that if Luthor does him a favor before his death he will tell them who hired him to kill Lex. Finally we see Power Ring discussing with Flash how she doesn’t want to feel controlled by the ring any longer…and Flash introduces someone who can help her: Green Lantern.

Well this was definitely was a step up from last month…but I’m still not completely satisfied about how they came about finding a cure for the Amazo Virus, still seems a bit too convenient that Superman had the answer all along. But I digress.

This month we got to see some excellent action of Wonder Woman fighting against various members of the Justice League…and I liked that she teamed up with Captain Cold to bring everyone down. Also seems a bit convenient that freezing will stop everyone…but again, I digress.

With the conclusion of the Amazo Virus, we got some doors opened up that are pretty intriguing. Patient Zero eventually forms up into something similar to the classic Amazo robot that we have seen previously, and it’s nice to see this character take on his abilities in a different more organic way than his robotic predecessor.

Additionally it was revealed that several of the people infected and cured with Amazo managed to retain their abilities…one panel even showed a silhouette image of a man behind a desk with the nameplate reading Amos Fortune. For those unaware (like myself before looking it up), Amos was a villain who originally founded and led the Royal Flush Gang…who knows if these bad guys will appear in future issues of Justice League.

Overall I liked the Amazo Virus story, however I found the ending a little weak…but the awesome art and fight sequences made up for it a little bit. However I am intrigued by next month’s tease of The Darkseid War…guess we will be seeing Darkseid return to Earth and continue his fight that he started back in the first storyline of Justice League.