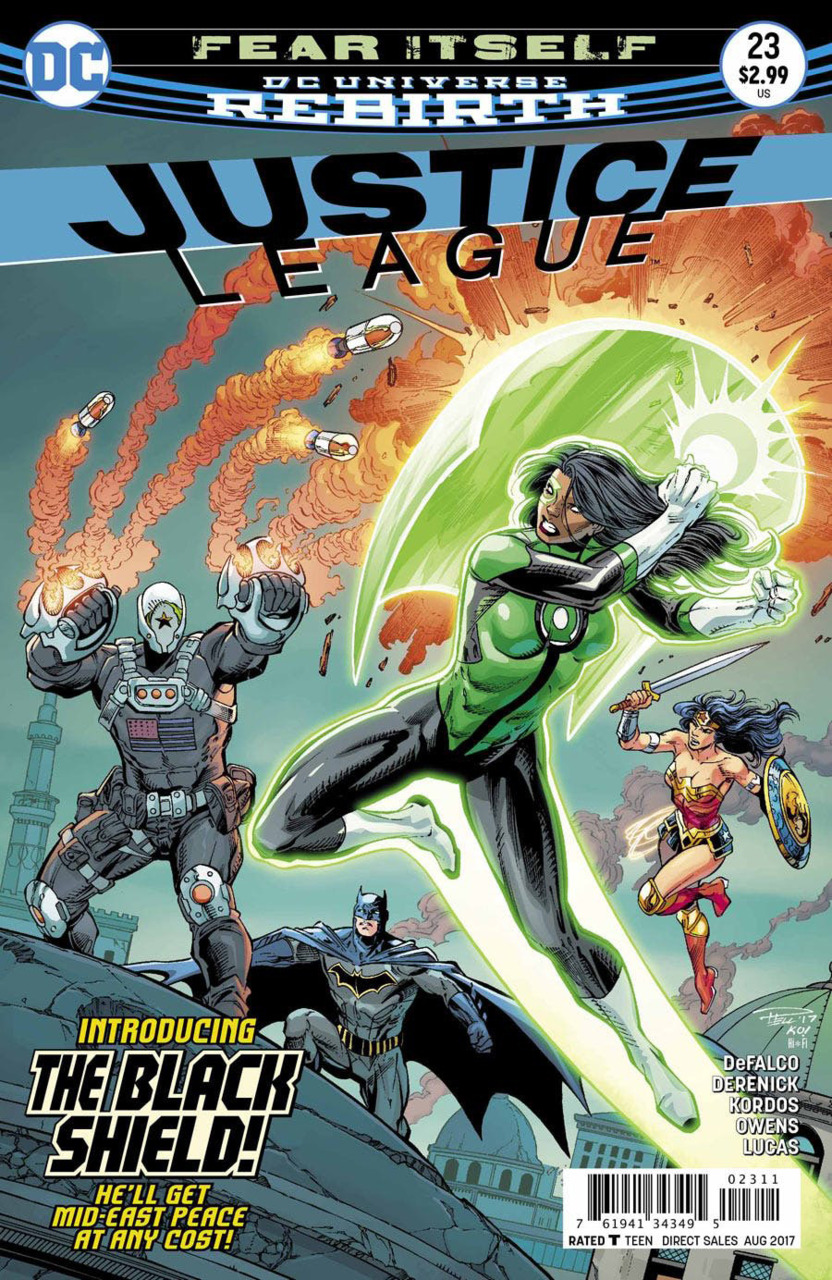 (Spoilers ahead) “Fear Itself” opens in northeastern Nomalia. Batman, Wonder Woman, and Jessica Cruz are there to take down terrorists. Batman is in the north of the bazaar and Wonder Woman is south. Jessica is in the skies. She spots the leader who has some kind of protective shield around him. He spots the Green Lantern and then admonishes her as a “little lady”, after all he is the good guy in this conflict and his name is Black Shield. He opens fire on the Lantern who erects a shield of her own. The terrorist pours on more power and knocks Jessica into a home scaring a little girl and her mother. The mother accuses Cruz of attempting to kill her baby. Jessica just says that she is there to protect them and she meant them no harm.

Black Shield picks up a device and fires it into the sky. Wonder Woman will not be able to reach the rocket before it detonates and asks where Green Lantern is. Lantern, who is still in the home picks up the coms from Batman and Wonder Woman and takes off after the rocket containing the explosion in an energy bubble.

Back on the Watchtower, the trio with Cyborg analyze the compound that was released by the explosion and captured by Green Lantern. It is a compound designed to melt human flesh. The team theorize about the source of the compound and Batman decides to interrogate the terrorists they captured in the fight. They need to learn Black Shield’s next target. Batman asks Jessica if she was injured as she fell off the grid during the fight. She has a flashback of the little girl and she turns and says that she is fine and walks out. Batman says that she is hiding something and he is suspicious. Wonder Woman berates him sarcastically accusing him of being so open and trusting himself. Cyborg will start working on a counter agent and Batman will start the questioning. Wonder Woman however goes after Jessica. Jessica tries to blow her off but Wonder Woman just says “Let’s not go the magic lasso route, “sweetie””. Jessica finds out that they heard her exchange with Black Shield over the coms. Jessica admits that she underestimated his force shield and that mistake led to her crashing into the apartment and terrorizing the girl and her mother. Wonder Woman puts her hand on Jess’s shoulder and tells her that collateral damage is always a possibility. Jessica is concerned that she could have killed the little girl. Batman approaches them and dismisses Jessica saying that all the people could have died if they had not intervened. Jessica retorts that Batman uses fear as a tool and shouts at him asking if he can imagine terror. Batman turns and says yes he can. Jessica asks Diana what she said and Wonder Woman just says that it is not her place to explain. Jessica asks the question how can they stop a man who cannot be hurt. We get a panel of Wonder Woman looking very shifty like she has an idea.

Batman approaches the prisoners asking for the next target. The prisoners just respond saying that Batman has his limits while Black Shield does not. Wonder Woman comes in holding a thick piece of steal pipe. She twists into a knot and throws it into the cell saying that she is an Amazon princess and has little regard for useless men.

The next target is Bialya City, the capitol of Bialya. Black Shield and is men are in the palace threatening the tyrannical governments. Batman and Wonder Woman crash into the building and attack. Each attack on the force shield surrounding Black Shield increases it power and it discharges into his own men. Shield then chastises Wonder Woman calling her sweetie and draws her outside where he attacks her. Wonder Woman goes down and Black Shield aims at the bystanders. Jessica arrives and protects the people with her own force shield. She was watching for stray force blasts and acting as the protector. She then creates an energy scoop and picks up Black Shield in it. She turns the construct into an hour glass imprisoning him.

Cyborg in the Watchtower detects multiple heat signatures. The rockets containing the deadly compound are launched from different locations of the city. Batman encourages Jessica telling her that she can do this and Wonder Woman tells her that she has the strength and will. We see a look of panic on Jessica which turns into resolve. She is able to contain each of the rockets at detonation like she did in the beginning of the issue. Wonder Woman tells Jessica well done Sister and Batman agrees. With her power her adds that he is even more suspicious of her. Wonder Woman just says typical. Jessica brings Black Shield and the captured gas into the atmosphere. She has a thought over as Shield chides her asking her if she is proud of herself for aiding terrorism. She has made too many mistakes to be proud but she needs to remember so those mistakes will not be repeated. She has a long way before she will be close to Batman and Wonder Woman but she will keep trying. Next issue the Justice League versus Mera.

This is another stand alone story. We get more of Jessica Cruz in this issue. I am growing weary of always hearing about how afraid she is and then overcoming that fear and doubt to save the day. I really want to like Jessica as a character, but she always appears stagnant.

I also feel that the suspicions of Batman here is also exaggerated. He trusts his teammates and it appears that he has not shared his identity with Jessica as she has no idea why Batman turns and walks away after their verbal exchange.

I really like the art in this issue. The artist really showed the emotions on the character’s faces really well. The steely resolve of Batman. The panel showing Wonder Woman definitely gave me the impression that she was thinking about what to do and we saw her decision in the next pages with the steal pipe. The face shots of Jessica were also great. The reader can see the fear and the resolve in her features.

Overall, I am growing tired of treading across familiar territory, but I really enjoyed the art in this issue.