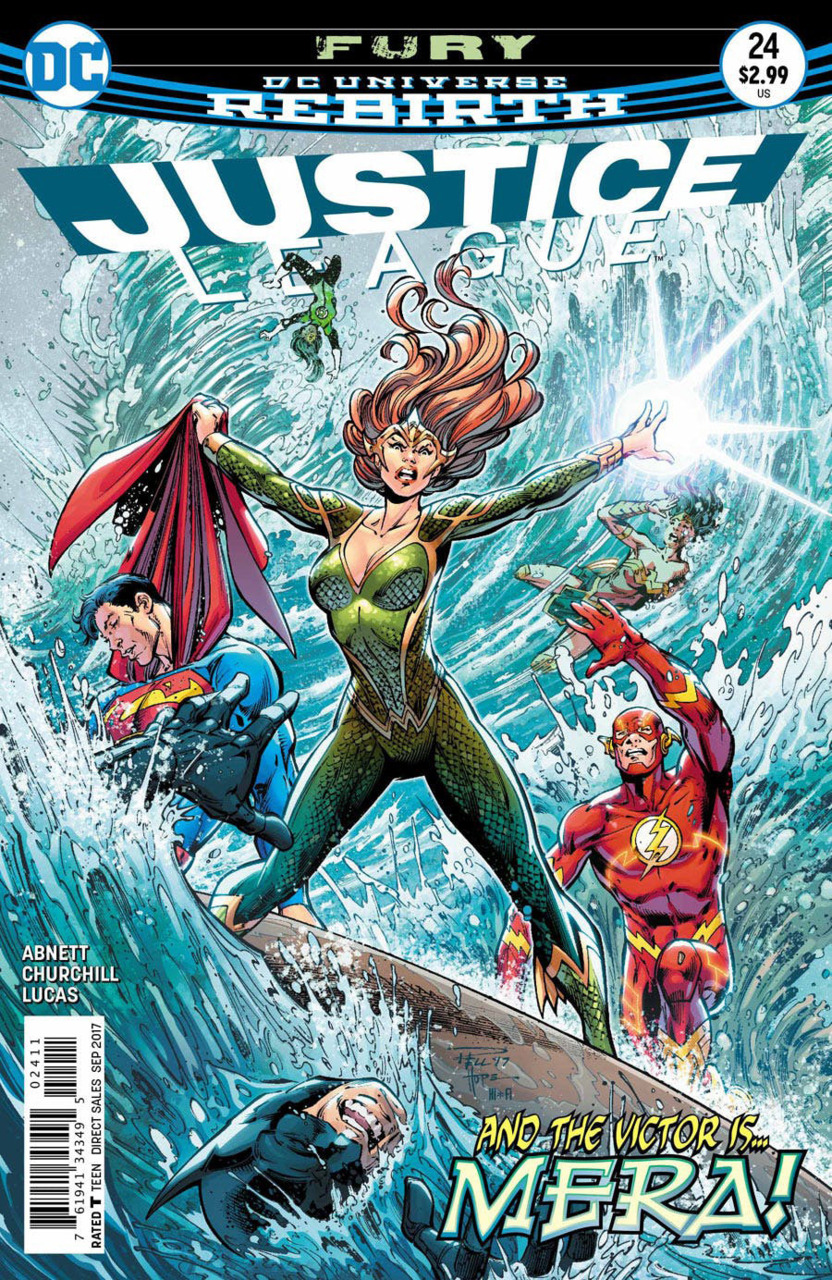 (Spoilers ahead) “Fury” opens in the Watchtower. Cyborg has urgently assembled the League. As he puts it, something monumental went wrong in the Atlantic, a superstorm has disrupted the oceanic flow and it is centered at Atlantis. Superman says that is all they need to know and the League races off with the help of the Green Lanterns. They find that Atlantis has been exposed by the ripping back of the ocean. They also find that the city is covered by a dome. Cyborg analyzes the dome and finds that it is not composed of anything he has ever seen before and it is unbreakable. Wonder Woman smells magic and Superman suspects a new Atlantean weapon. The Lanterns also discover that immense tidal waves are heading for the United States coastline. Superman orders the team to the coastline and Cyborg boom tubes them there. They find that they are not in time and Batman orders Flash to bleed the energy from the leading edge of the wave. He also has the Lanterns form shields in the waves path. Suddenly Mera shows up with orders not to interfere.

She shouts for the League to go away. She has been driving the ocean against the Crown of Thorns, the barrier to try to reach Aquaman and it will not break. Superman and Wonder Woman try to get Mera to calm down and she reacts by forming water bubbles around the two heroes and casting them away. The Lanterns go into attack mode and Mera uses her water powers to strip the two of their rings and both fall into the waves. Flash finding the four big hitters down tries to rush Mera only to be stopped by being dehydrated by her. Cyborg moves in and Mera pushes him away with a water spout, leaving only Batman, who goes stealth trying to sneak up behind her with a tranq gun. Mera says that she knows all about Batman’s play book, but he does not have one for her, none of the League knows her. She grabs Batman by the throat and starts to strangle him. Superman, Wonder Woman, and the Lanterns who have recovered their rings go in for the next round. Batman reaches for a hypersonic screamer and that forces Mera to let go of him. Mera pleads for the League to stand down, they cannot help. If they assault Atlantis it would be seen as an attack from the surface world and as a result it will provoke war. Superman tells her that her assault nearly washed away the east coast and that finally gets through to Mera. She did not realize what she was doing and forces the water back away from the land.

Mera drops to her knees in despair. She has no one to help. Wonder Woman reminds her that that is how Arthur started. The League gave him a place to be in a world that did not know him. Superman asks Mera to let them help her. Wonder Woman tells her that if she wants them to move on Atlantis they will but only if she says so. She suggests that they listen and support Mera. Batman suggests that they take her to the Watchtower and Mera assumes that they mean to replace Arthur with her. Wonder Woman says to her to make us your friends too.

On the Watchtower, Mera tells them that she has no home. Beyond Arthur, she has no identity either in Atlantis or the surface. She was excited when Arthur lost the throne of Atlantis. She thought that they could make a home free from Atlantis on the surface, his home. Batman asked Mera when did Aquaman teach her to take down the League so effectively. He didn’t, she just was bluffing to put Batman off his game, Arthur said that his mind was the most dangerous thing about him. Batman responds with his customary grunt. Wonder Woman takes the hand of the despairing Mera who says that she has made everything worse. Diana shows her the Earth. Mera sees herself as not belonging anywhere and Superman says that they are all outsiders. The Watchtower is where they came together and that is what keeps them together.

Simon rushes in saying that Qwardian hate drones just deployed in Pakistan. Wonder Woman responds saying they are coming. Batman suggests that Mera join them and we get a panel of Mera with a grin on her face. She rushes off with them. Simon asks Batman if it is a good idea to have her along, she was able to take them all down even thought she was exhausted and not at full strength. Batman just says exactly, you saw what she did to us. The final panel is the League with Mera rushing to the next mission.

This was another okay issue. The story itself really did not thrill me much, it actually forced me, which I am not upset by, to catch up on Aquaman after the second trade volume. If the reader knows Mera, it was a little surprising why she was acting the way she was and the editors note was helpful to give the answer, but that made me want to catch up which was the editor’s plan anyways.

It was interesting to see her use her power over water and her physical strength to take down the League, but the battle was just a way to get action into this issue. There really is no resolution to the Atlantis situation. Now it looks like Mera will be joining the League for the near future. Will the League return to Atlantis? It is hard to say, the League has been seen in the pages of Aquaman before.

The best part of this issue is the art. Ian Churchill is a guest artist and I really enjoyed the art. The backgrounds gave the Atlantic storm real perspective. It was clear that this was a disaster event without a strange color in the sky. The little details here are terrific. The character’s hair looked wet, even Mera’s, who lives in the water had water logged hair when she surfaced and I really enjoyed that detail. Wonder Woman’s hair even looked stringy and wet after the battle. When the League was back in the Watchtower, all their hair was back to the shine and luster of before.

The biggest complaint is the add in the middle. It really interfered with the story in my opinion. We go to a sneaking Batman in the water to a Snickers advertisment with Grodd. I thought “What is this?” as I was reading it.

The art give this issue a higher rating for the sheer amount of detail alone.