SDCC: Batman Gets a New Batmobile for Justice League 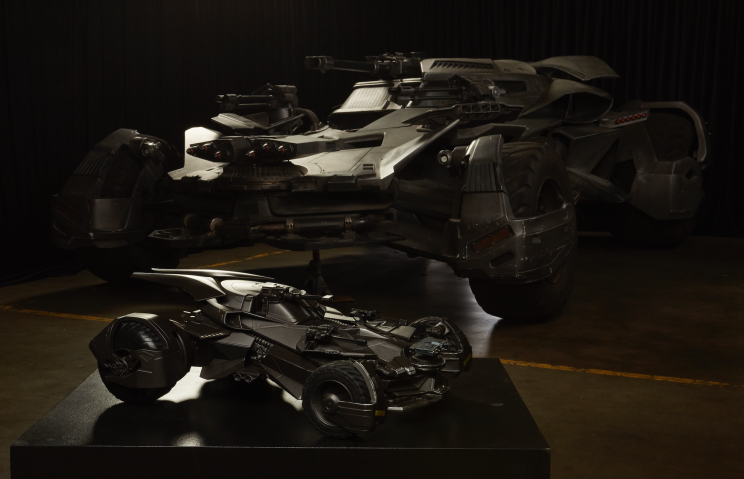 While Wonder Woman and Superman take to the skies, Flash speeds along, Cyborg assuredly has jets in his bionic boots, and Aquaman ride seahorses, Batman will still have to rely on the Batmobile in the upcoming Justice League flick.

Luckily his ride will be an upgrade from the previous model, which I’ve taken to calling Clark’s Punching Bag, and Yahoo! Movies has given us the first look at the improved car which will be on display at SDCC this weekend.

This version of the Batmobile combines the tactical feel of the Dark Knight Trilogy’s Tumbler with an aesthetic that actually looks like it takes inspiration from the earlier films and animated series. The result is a blend of real world and fantasy, and has some heavy firepower under the hood:

The hybrid prototype military and civilian vehicle, reaching speeds of up to 205 MPH, has been integrated with the latest in covert military grade armaments as well as stealth and active protective systems. With twin .50 caliber retractable machine guns, missile launchers and more, the Justice League Batmobile is over 20 feet long and weighs in at a whopping 8,500 lbs.

If you want to nab your own Batmobile without a trust fund and having to suffer horrific childhood trauma, Mattel will be selling a remote-controlled version in stores this holiday season for $250. Pre-Orders for this ultimate collectible are said to go live tomorrow. And if you’re lucky enough to be at SDCC, you can grab a Hot Wheels version for $25.

Which version of the Batmobile is your favorite? Let us know in the comments!

UPDATE: The unveiling has happened and Warner Bros. has sent over two picture sof the new Batmobile you can see below. What do you think?