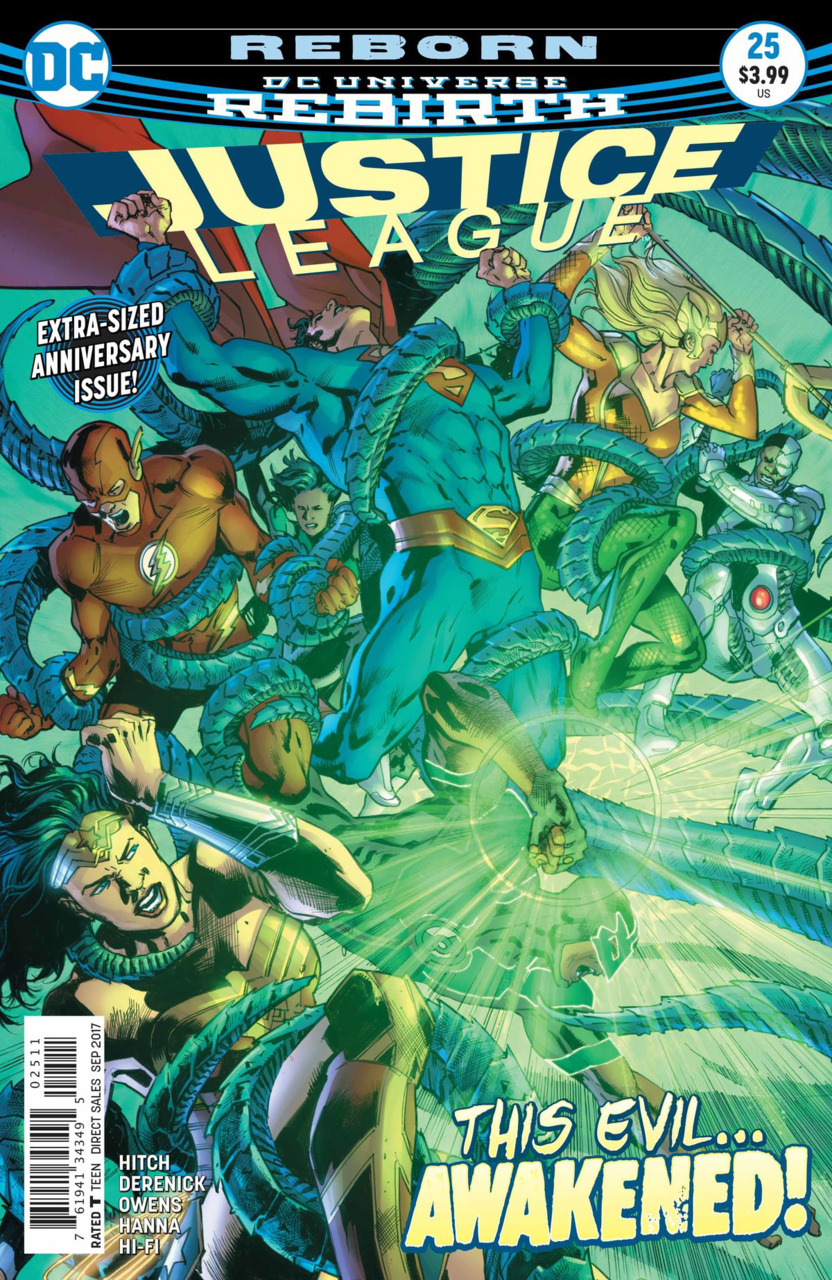 (Spoilers ahead) “Reborn” opens with a flashback. A powerful creature, Shirak rose to power conquering many worlds. It is able spread an infection that turns the planet’s population into its zombie soldiers. The Guardians of the Universe drew a line in the cosmos and sent the entire Green Lantern Corp to attack. The Green Lanterns moved in firing at Shirak and his slave soldiers. Billions of the people were killed in the attack. The Green Lanterns suffered thousands of casualties themselves. The result was the death of Shirak. In one last ditch effort, Shirak casted his essence into gems and threw them into the universe. The Lanterns hunted down each stone believing that they captured each on. One stone did escape the Lanterns. That stone fell to Earth. This is the story the captive Molly is giving Batman. It is a story about life, death, and rebirth. She asked Batman to see her because the end is coming. This end she and the Timeless were unable to stop. This end is all about rebirth.

Cyborg and Baz are at the Michigan Science Center in Detroit, Cyborg’s home city. They are volunteering at a high school field trip. Baz is nervous and Vic asks him if he agreed to go with him to avoid going to the mosque. Cyborg tells him that the Mullah called and asked Vic to talk to him. The Mullah wants Baz to talk to the young guys there. He thinks Simon Baz will be a good role model and Baz is not so sure. A little girl runs to the two shouting that Mr. Cox is not well. Cyborg and Vic approach Cox and he grabs another little girl and holds a gun to her head. Simon levels his ring on Cox and Cyborg stands in between the two to talk Cox down. Cox says that he hears something asking for blood. Cyborg does not detect any transmissions and Cox realizes that he is holding the girl, Betty hostage. He lets Betty go and Simon gathers the kids to get ice cream and to call their parents. Cox still holding his gun turns the barrel to his own head and pulls the trigger. Cyborg and Simon rush the kids out when Simon gets a notification from his ring. A restricted object has been located and is in the immediate vicinity. There is an explosion.

While this is going on, Batman and Molly continue talking. Their conversation centers around patterns of creation and the formation of super powers. The universe is in a constant state of rebirth. Each time the universe is recreated, there is a slight change and the cycle continues. Batman asks Molly if the events are preordained. She says that everything is preordained. Nobody has defeated the darkness that she is talking about in the repeating pattern. No one knows what this darkness is but they can feel it. She says that more evil is waking today that should have stayed dead, referring to Shirak.

In Detroit an energy pulse is dispersed and Simon uses his ring to protect them and the kids. One girl sees Cox change into a zombie soldier like we saw in the flashback. The two Leaguers rush the kids out as Simon gets a ring report that all Terrans are being transformed into Shirak’s wraith army. The ring downloads the data to Simon and Vic. Simon activates his Green Lantern uniform and attacks Shirak who shrugs the attack off and grabs Simon by the head.

We go back to the Batman conversation. Batman asks Molly if she is talking about God, she does not know what else to call the creator. Batman does not believe in God and he says that he has met a few gods and he does not believe in them either. Molly calls Batman, Bruce and says that nobody cares what he believes. Molly then proposes the theory that if God exists there has to be an opposite, something like the devil. Molly says that it is not good versus evil, neither side has a moral code. Something has made the end of humanity their purpose.

In Detroit, Simon is being man handled by Shirak, but back-up has already arrived in the rest of the Justice League including Mera but not Batman. The League attacks the zombie solders that used to be people but they engage not to do them harm. Shirak in response sends tentacles into the asphalt and those tentacles come out and grab the League members except Baz. Shirak tries to infect the League he has captured and we see their eyes start to glow blue. Simon is left standing alone.

Batman tells Molly that choices do matter. Batman believes in the choices he has made whether they were for good or bad. He does not believe in predestination.

Simon stands up. He says that he is not great Muslim or man. He has made mistakes. Everyday the Justice League fights evil and terror. Shirak finds out that the League is resisting him. Simon attacks and tells Vic now. Simon used his ring to scan the stone Shirak grew out of. He found that the stone was not magic but was really technology and Cyborg rewired it. Simon then contacts the zombie army and gives them a choice which is something the Green Lantern Corp did not give Shirak’s prior victims. The victims walk towards Simon’s light and they become healed. Shirak also disappears in rubble. Cox, from the beginning of the issue is healed and Cyborg picks him up. The stone was a resurrection device. Cyborg picks up an emergency signal and the League boom tube to the new location.

Molly continues to tell Batman the darkness has come. Batman tells her that they will make their own choices. Molly tells Bruce that they have brought the end and they are going to find out what their lives are worth.

This story is basically two stories in one. We get the action scenes in Detroit which I really enjoyed and the exposition scenes with Batman that I did not enjoy quite as much.

In reading the exposition, Molly and Batman really do not seem to say too much. They talk about rebirth and choices as they pertain to the coming evil but they basically argue over religion and free will in the end. A debate that is still going strong in Christian circles today.

The action is fantastic. This issue has what I was missing in the previous issue. We get a fight involving the entire League but we focus on Simon Baz here. Baz is able to save the day in the end but he still recognizes that it is still a group effort.

The art here is good. The most striking panel is the close up of Molly’s face. She looks extremely evil in this panel like she wants the end to come.

The one question which is not answered is where are they. They look like they are in a warehouse and Molly is strapped into a box that completely restricts her mobility. The box even has a clear glass or film that covers the upper half of the box. In the end she is pushed back into an alcove. What is supposed to happen to her?

Although the action was great, the exposition got in the way.